One of the items I discovered at Winterail this year was a vintage tank car placard. It is reproduced below. (For a description of the annual Winterail meeting, you may wish to read my post on the subject, which is at: http://modelingthesp.blogspot.com/2012/03/winterail.html .) I did purchase it, since luckily it was not very expensive.
Before talking about individual placards, I should point out that the idea behind placards is to ensure that anyone who has to move or unload a car containing dangerous material will know what that material is, and be aware of what cautions are appropriate. This applies to many loads in tank cars, but can apply to any car type.
The placard I bought at Winterail was produced by the St. Louis-San Francisco Railway, and it has a “document date” on it of April 1962. As a standard placard, it is 10-3/4 inches on a side, which fits a tank car placard holder. Note that below the word “Dangerous” is a space to write in the particular cargo. 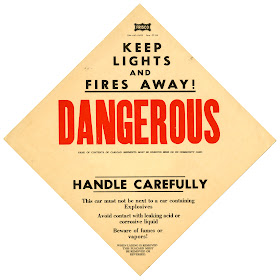 The immediate question which presented itself was, would this be applicable to my modeling? Or, a bit more generally stated, what placards are applicable to my modeling, and why?
Luckily for modelers, there is an authoritative and complete magazine article on this subject, by John Ryczkowski, in Mainline Modeler (Volume 14, January 1993, pages 68–73). John clearly describes the various placards of different eras, and makes clear that my modeling year of 1953 was very different from more recent years. Any modern modeler reading this post can find detailed descriptions and images of contemporary practice all over the Internet, but for older material, you’ll pretty much have to consult John’s article.
One big watershed to recognize: in November 1981 the U.S. Dept. of Transportation adopted the United Nations world-wide system of numbers to identify classes of hazardous materials. These UN numbers, ranging from 1 to 9, are at the bottom tip of more modern placards and readily distinguish post-1981 placards from older ones.
So what about the history? I will abstract a brief description from John’s article and show a few examples. Placards were in use at least as early as the start of the 20th century. However, statutory placard requirements began in 1921, in an amendment to the 1920 Transportation Act, granting regulatory power to the ICC to ensure safe transportation of dangerous materials. There were four original placards: 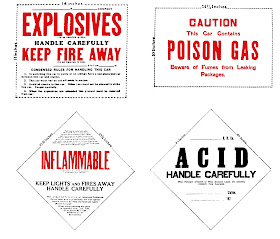 At top left is the Explosives placard, with critical words printed in red. Next to it is the Poison Gas placard, all in red, and at lower left is the Inflammable placard (in those days, “flammable” and “inflammable” were synonyms; today only the word “flammable” is used, to avoid confusion, or over-thinking of the problem). The Acid placard was smaller and could be pasted onto placard boards or even directly onto the tank itself. In this era, possibly dangerous empty cars were indicated by simply reversing the placard for the former load, showing its blank side rather than an empty placard board.
These placards remained in use into the 1950s. Here is a photo, courtesy Bruce Petty, of a box car with an Explosives placard on the door (photo dates from 1956). Though placards for dangerous materials are primarily associated with tank cars, it must be remembered that they were used for any car type if needed.

In 1930, additional placard categories were added, with the original four remaining in use. Here are the ones added in 1930. All are 10-3/4 inches square. 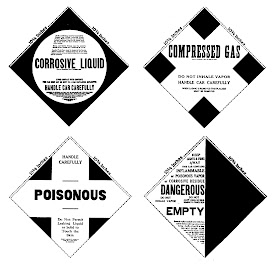 The Corrosive Liquid placard was for corrosive materials other than acids. The Compressed Gas placard is self-explanatory. The new Poisonous placard was for materials less dangerous than the Poison Gas category, which is to say, harmful materials, but not immediately threatening to life. Finally, since several of these material categories remain dangerous even as residue in a nominally empty car, the Dangerous Empty placard, half black, was introduced. This provided positive information, compared to simply reversing the placard for the former load.
During the 1930s, and certainly prior to World War II, a new Dangerous placard was introduced, much like the one I acquired at Winterail, suitable for a variety of cargoes, and having an area to write in the particular cargo. Here is a wartime photo, from the Office of War Information, of such a placard being added to a tank car. Note that to the right of the workman is an Empty indication, made by folding down the previous placard. Probably the workman is going to add a new Dangerous placard to that placard holder also. 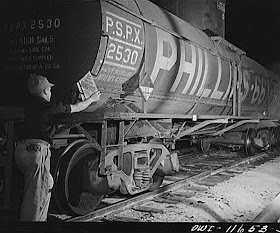 In 1960, a number of important changes to placards were made, including creation of more of a family resemblance among them, and increased use of color. But major changes did not occur until 1974. So modelers of pre-1974 railroading, and even more so for pre-1960 modeling, have considerably different placards to consider.
As I will show in the second post on this topic, “Modeling,” these dates are not merely dry history, but help to indicate the various decal and other model placards which are useful for different modeling eras.
Tony Thompson
Tony Thompson at 11:45 AM
Share