My layout is approaching completion, though it still has a number of incomplete areas. But that doesn’t mean that everything completed is satisfactory. Naturally some of the areas represent work I did a couple of decades ago, and now I may want something better. And an occasional walk-around always shows things that need correction or improvement.

The one I want to talk about today is a tool house area near the mainline tunnel on my layout, just railroad-west of Shumala. This tool house was placed here for two reasons: first, because Southern Pacific often maintained tool houses near one or both portals of tunnels, and second, because I originally surface-mounted one of the early “slow-motion” switch machines here, and wanted to conceal it with a structure.

Below is shown the scene as I wanted it to look, and as it has looked for quite a few years. Some visitors imagine that this is a train-order office, but it’s merely a tool house. 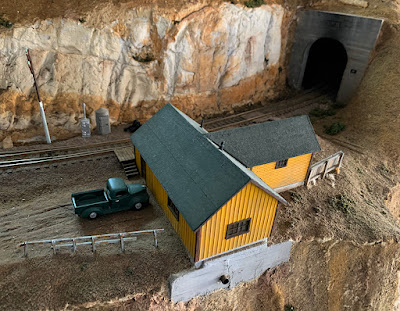 The tool house itself was removable, because I expected I would need to make adjustments to the stall-motor switch machine. This was fine for a time. But eventually the motor stalling behavior led to its burnout, and I had to remove it from the site. I don’t remember who made the device, but it was fine while it lasted.

When I pulled out that switch machine, I wanted to maintain positive electrical contact for the curved switch in the mainline track. I adopted the contact assembly from a twin-coil switch machine mount to do the job, and it works fine. Here is the site with the structure removed (you can click on the image to enlarge it if you wish). 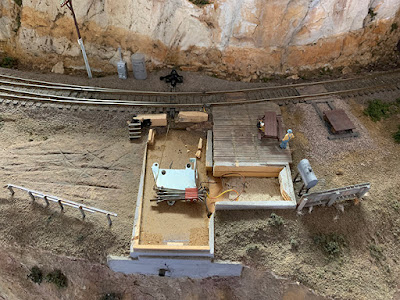 The problem needing solution now relates to the two “walkway” pieces that I had created to cover the gap between the tool house and the track. I made these removable, for the same reason as the structure, and you can see their location at trackside in the above photo, where they should lie atop the two balsawood blocks. When the two pieces of walk were present, the walkway looked like this, with a gap for the switch linkage: 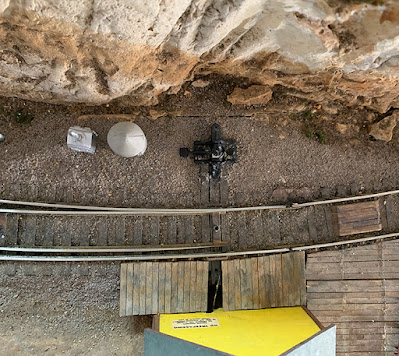 The problem here is that I made the walkways so that they lie just below the railhead, and almost touch the rail. Whether this is a realistic arrangement, I don’t know, but there have been many instances during layout operation in which a projecting sill step or locomotive foot board has hit one of these walkways. Upon reflection, the solution was obvious: set the walkway pieces lower, and outside the ends of the ties.

The photo above that shows the site without the tool house, also shows the two wood blocks near the track that are the walkway supports. I simply took a razor blade and shaved these down lower, then trimmed the width of the walkway pieces so they can sit farther from the track and still abut the house. Now the walkway is lowered to the height of the ties, and is glued down. Rails are restored to the deck in front of the speeder shed. 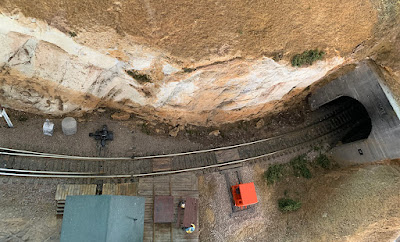 This small modification should remove a nagging performance problem. I will of course be keeping an eye on it to make sure it’s really fixed!