From time to time, I have related in these posts various sequences of events surrounding a few freight cars. Sometimes they even rise to the level of a “saga.” This is one such, this time an HO scale brass model of a Pennsylvania Class F38 flat car. The model was built by Woo Sung in Korea and imported by Rail Classics. Most photos show the models factory painted.

I don’t know whether this particular model was originally painted or not, but it came to me painted for a road other than PRR.  The model’s owner, my friend Paul Weiss, wanted the car to be correctly lettered for its true owner. So my first question would be, what’s the prototype?

There were just two cars in this class, built at the PRR shops in Altoona, PA in 1954, distinctive four-truck flat cars with a 500,000-pound capacity. That was accomplished with four Buckeye 6-wheel trucks under span bolsters. The body was a one-piece steel casting by General Steel Castings (for more about them, see my post at: https://modelingthesp.blogspot.com/2021/11/the-gsc-flat-cars.html ).

For information about this or any PRR flat car, I consult the superb book by Elden Gatwood and Al Buchan, entitled Pennsylvania Railroad Flat Cars (Pennsylvania Railroad Technical & Historical Society, Kutztown, PA, 2008), which I’ve mentioned it before: https://modelingthesp.blogspot.com/2021/01/another-simple-resin-kit.html , and will say again, it’s one of the great freight car books.

The problem one immediately recognizes with trying to re-letter a model of the F38 flat car is that the side sills are so narrow, that not just any decal set can work. Here’s a PRR photo of the first of the two cars, PRR 470246, taken from the book shown above. (You can click on the image to enlarge it if you wish.)

Here’s another photo from the book, that may make the lettering a little more obvious (note that “DO NOT HUMP” is permanently stenciled on the car, just at the near end of the side sill). The loads, from Mesta Machine Co. of Pittsburgh, appear to be crosshead castings or foundations for a mammoth press.

Shown below is the HO scale model, and the welded, smooth deck is evident, with numerous tie-down points for bolt-through or steel strapping attachments. It’s freshly repainted with Tamiya “Fine Surface Primer,” Oxide Red, reputedly a good version of PRR “Freight Car Color.” You can also see (if you enlarge), along the side sill, the numerous cast-in ribs of the prototype. These would prove a challenge for decal application.

I was quickly able to determine that there are no decals available. My friend, Bruce Smith, past president of PRRT&HS, confirmed this finding, but copied John Frantz of Mt. Vernon Shops on the messages. John had prepared any number of PRR decals over the years, and so the F38 was thrown up as a challenge. John decided to give it a try but warned it could be awhile. So the model has been sitting alongside my workbench for some time.

But just recently, John’s decals arrived. These are essentially a custom decal, not part of his regular stock, but they suit the brass model perfectly. What a pleasure to have every bit of the prototype lettering available! But as mentioned, fitting the decals to the narrow sill and its ribs did prove a challenge. Here is the car, PRR 470246, as lettered, but without weathering yet.

I used my ordinary process of acrylic washes to weather this model (see the “Reference pages” at the top right of the present post for more information on materials and procedures). The last step was a coat of flat finish. Here you see the car in mainline freight train (just trying out its operation), passing the Shumala depot on my layout. 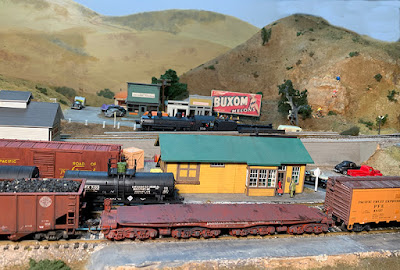 This has been an interesting and challenging project, and I am grateful to John Frantz for helping out with the decal problem. Now the car heads back to its owner, Paul Weiss, and his Central Vermont layout.