There is a fairly long and complicated history behind Southern Pacific’s “Overnight” service, and I won’t really go into it in this post. For those who would like to examine details, I wrote a series about Pacific Motor Trucking (PMT)  in the SP Trainline (SP Historical & Technical Society), issues 43, 44, and 46 (1995-96). Essentially, PMT began in April,  1933 as an SP subsidiary, created for the purpose of owning and operating trucks.

The idea behind the “Overnight” service was for PMT to provide store pickup at origin, and delivery at destination, with SP trains connecting the two points. This provided “door to door” service. The first trains simply used baggage cars, but in October 1935, the first “Overnight” trains went into service, and in summer 1936 began to use specially-painted black box cars. An example is below, Class B-50-15 no. 9366 (Robert McFarland photo, Bayshore Yard, 1940, Arnold Menke collection).

Here the black car has Daylight Orange stripes along the top and bottom of the car side, and outlining the door. All lettering is also Daylight Orange. (Note that this use of Daylight Orange paint preceded the introduction of the Daylight trains themselves in March, 1937.) But this paint scheme disappeared during World War II, when “non-essential” trains were discontinued.

Of course, to many modelers and railfans, the “Overnight” scheme that is most familiar is the 1946 version, still with a black body but with yellow SP emblem and yellow arrow across a red ball. (The scheme was also applied to some of the Class B-50-15 and -16 cars.) Here’s a rare color photo, from the Bruce Petty collection: 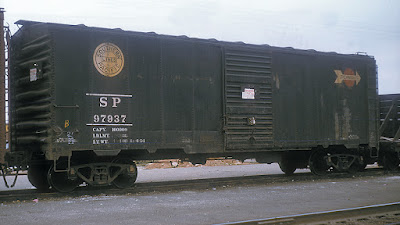 Though it’s not obvious in the photo above, all the car sides of Class B-50-24  had so-called “Alternate Center Riveting,” or ACR, a row of rivets in the center of each side panel, indicating an extra post inside the car at that point, added because of the thinner and thus less-stiff side sheets. After October 1956, a silver scheme was adopted which showed the ACR well (Wilbur C. Whittaker photo, Dunsmuir). You can click on the image to enlarge it if you wish. This photo also shows clearly  the wide-seam door used on these cars. 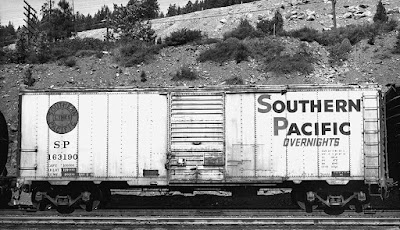 For more on the history of these cars, you may consult Chapter 12 of my book about SP box cars, Volume 4 in the series Southern Pacific Freight Cars (Signature Press, revised edition, 2014.)

There have been a great many model versions of the black box cars, in all scales, on a variety of 40-foot bodies, the great majority of which were not accurate. There are two major exceptions in HO scale. The first, perhaps surprisingly, is the old Athearn metal car in the Overnight scheme.

You have to give Irv Athearn credit here: rather than just slap the black scheme on their regular 40-foot box car, he had new ACR sides made, and new ends (the ends aren’t great but they do represent an “Improved Dreadnaught” postwar end, instead of using their regular prewar end). He even modified their regular door, which has rivets in the two seam panels, and removed the rivets to give it a welded look. Here’s one of these cars that I have.

These show up frequently with on-line sellers, so they certainly can be acquired if wanted. The only real defect that calls out for replacement is Athearn’s representation of a wood running board.

A more modern version of the prototype is the Sunshine model, with a better door and better ends, along with a correct metal-grid running board. My model is weathered more than the model you see above; but look again at the prototype photo of SP 97937, above.

Note that my Sunshine car has the spelled-out “Southern Pacific” reporting mark, though most cars just had the initials SP. The cars were in production during July to September, 1946, and it was not until the tail end of production, during September, that builder Mt. Vernon made the change to the new (1946) spelled-out reporting mark.

There are also model railroading challenges in how one might operate these cars (beyond, of course, running full trains of them in darkness). I’ll explore those in a future post.