In Part 2,  I showed a few of the Richard Steinheimer photos I particularly like, and tried to explain what I thought makes them distinctive. I also hoped my selection would illustrate some of the great qualities of Stein’s photography, as it is compared to other railroad photographers. That post can be found here: https://modelingthesp.blogspot.com/2021/12/richard-steinheimer-part-2.html .

I also mentioned in the prior post that I have visited the DeGolyer Library at Southern Methodist University, three times in all, and have ordered a fair number of prints from those negatives. I have paid the Library a fee for publications rights of them all, but always also asked Dick for his permission as well, even though the negatives belong to the DeGolyer. The last thing I would have wanted to do, was to use one of the photos in a way that Dick would not have approved.

Among Steinheimer’s many attributes was his knack for portraying the train in its environment. Often this meant the train being a rather small proportion of the image, not at all a typical “railfan” image. An example is this 1964 photo of a Milwaukee Road four-car local train in Montana, west of Bozeman, with the NP line in the foreground. I think it safe to say that few railroad photographers would have composed an image this way. 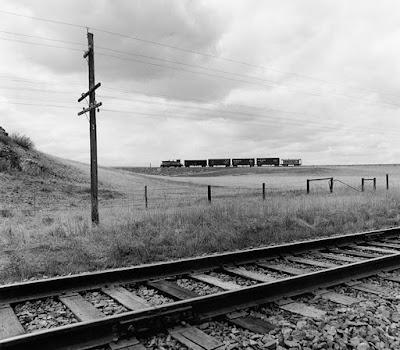 Another characteristic of Dick’s images was that often he would hike to relatively inaccessible places to get an angle he wanted. He also liked to work in difficult conditions. I remember him saying one time in a talk, “Ever notice how when the first snowflake falls, all the other photographers disappear?” He, of course, got some great images in bad weather. Below is one of my favorites, which was shown in the Electric Way book. Those are double-headed “Little Joes” on the point, above Falcon, Idaho in 1972, and Dick stated that it was snowing steadily. 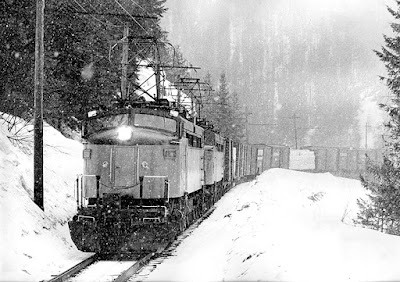 I bought this print from Stein at a Winterail, and having his signature on the back makes it especially fine.

Another photo I have always liked is this 1960 image inside the caboose of the eastward Coast Merchandise train (the “Overnight”), about to depart, and the conductor and brakeman (both naturally wearing hats) are going over the waybills. A great scene from a bygone era. 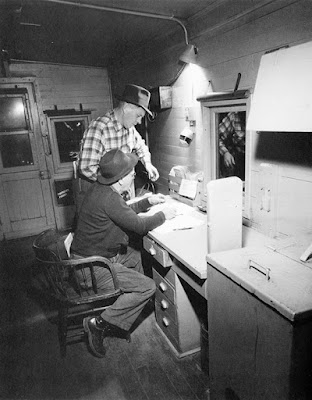 Finally, I’ll admit that as a modeler of SP’s Coast Route, I really concentrated on Dick's images of the Coast when examining negatives at the DeGolyer. Many of them were published in my book with John Signor, Coast Line Pictorial (Signature Press, 2000). I might begin with a good example of his ability to portray employees at work. In the photo below, a workman is just taking down the blue flag, hooked to a loop on the cab side, to release this helper on the westward “Mail,” no. 71, led by 2-10-2 helper no. 3711, about to depart San Luis Obispo. (You can click on the image to enlarge it if the blue flag isn’t evident.) 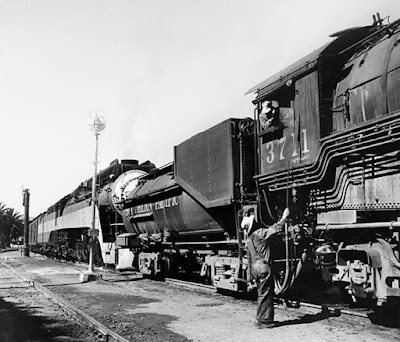 Another favorite is below, taken in the same area as the one above. It’s the two sides of the “Coast Mail” meeting at San Luis Obispo in 1953, westward No. 71 at right waiting to depart behind 2-10-2 helper no. 3666, and arriving No. 72 just coming into view at left, behind Class Mt-1 no. 4307. Both the engineer and fireman on the helper are watching No. 72. 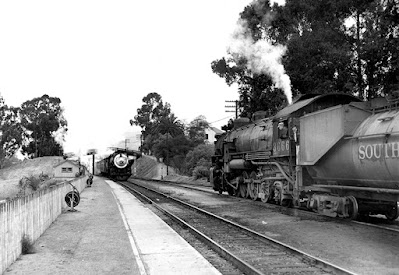 These few photos, of course, barely scratch the surface of the tens of thousands of negatives Dick took of railroad subjects in his lifetime. I just hope they convey my appreciation for all he accomplished.