Almost since I was aware of railroad photography as something beyond snapshots of interesting trains, I recognized the quality and, often, the drama of a Steinheimer image. As I mentioned in the previous post, this began for me in the 1950s in Trains magazine (you can see that post at: https://modelingthesp.blogspot.com/2021/12/richard-steinheimer.html ).

I should mention that my grasp of Steinheimer’s work was immensely increased by visiting the DeGolyer Library at Southern Methodist University in Dallas, where the great bulk of Dick’s pre-1970 negatives reside. When I first visited there in 1988, the photo curator at the time, Kay Bost, allowed me quite free access to the Steinheimer negatives, but warned me that prints would be expensive. The Library appreciated that, in a sense, these were art photos, and accordingly used a high-end lab to make good quality prints. These would be expensive. I replied that to me, that was actually good news.

She then added that if I wanted to obtain permission to publish any, I could wait until I chose such photos, and individually request permission then (and pay a fee for each), or I could pay a fee up front for permission to use any and all of the prints I was ordering. Luckily, I chose the latter option. Most of what you see in this post are from those prints.

In the present post, I want to offer a few amateur’s comments about the Steinheimer images that have struck me. One thing evident from the very beginning of seeing these was his ease with night shots. Doing these well is of course not trivial, and years before O. Winston Link’s wonderful night shots on the Norfolk & Western gained visibility, Steinheimer was doing them frequently. Here’s one I like, the operator at Saugus, California handing up orders to eastward No. 806. Note that we see the entire operation: the operator hooping up, and the fireman reaching out for the hoop. 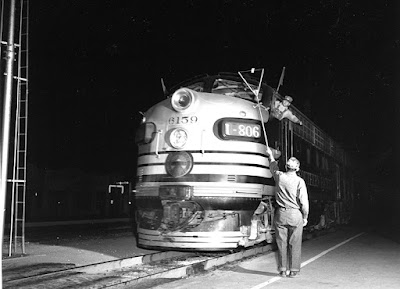 This photo also includes another real skill of Steinheimer’s, portraying employees doing their job without any apparent awareness of the photographer. Dick told me one time that his approach to such photos was to chat with the employee for a few minutes and set any misgivings at ease. Then he would move a little ways away and wait for the right moment.

Below is an example of this. It comes from a set of about 20 photos Dick took in the Los Angeles PFE shops in December 1950, showing car rebuilding (negatives at the DeGolyer). His aim, he told me, had been that PFE would want to buy the images for publicity use. To his dismay, PFE made clear that the last thing they wanted to publicize was rebuilding of old equipment. I used many of these images in the Car Shops chapter of the PFE book. This one shows workmen completing a rebuilt car interior. 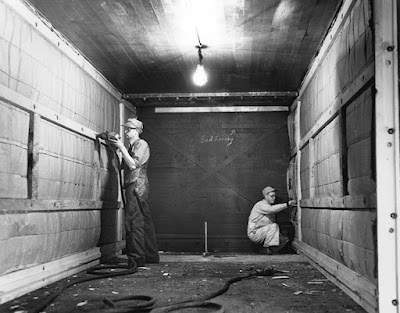 Dick is of course known for his many dramatic and even artistic images. But he took lots of photos that could be called “documentation,” too. One example, which was included in Backwoods Railroads, is this useful view of the Santa Maria Valley Railroad with its typical pair of GE 70-tonners, passing the La Brea Ice Co. deck in Santa Maria. Like many of Stein’s images at the DeGolyer, this was in a paper sleeve with his trip notes typed on the outside, most interesting and informative. 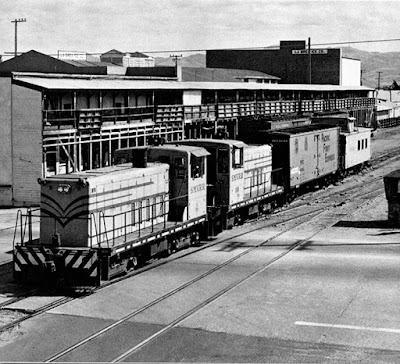 (By the way, it’s true his nickname was “Stein,” but primarily in the third person. Most who knew him, including me, always addressed him as “Dick.”)

One of the most famous Steinheimer photos is his image of the horse in the middle of Horseshoe Curve, above San Luis Obispo. As I know from looking at his negatives at the DeGolyer Library from this day in 1953, he took photo after photo of passing trains, always with the horse turning his rear toward the camera, or with his head down. Here’s just one of the images. 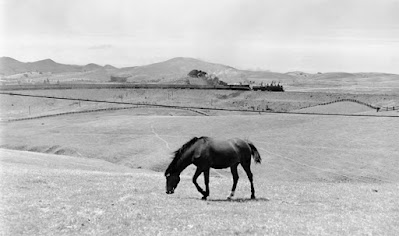 But Dick just wasn’t happy with what he was getting, as he once told me. Finally, the descending Daylight blew its air horn for the Gold Tree crossing, and the horse raised his head. That was the shot Dick wanted, and that’s the famous image. But this episode shows that even the great photographers have to have both vision and patience, and may expose lots of shots you would normally never see. 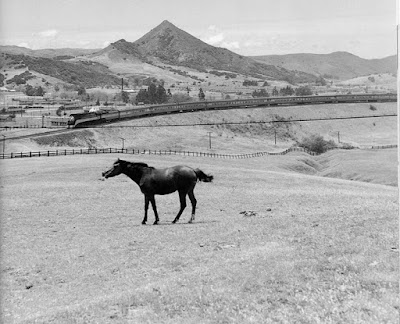 These five photos are a necessarily brief representation even of my own favorites among Dick’s work, never mind the innumerable favorites of others. But I wanted to keep this at a reasonable length. I will conclude my comments in a forthcoming post.