The title of this post may seem ambiguous, but bear with me. I am referring to the way(s) that empty ice reefers were, or may have been, moved to the shippers that ordered them. Here I assume the reader knows the background of Empty Car Bills, Waybills, and so on. If you don’t know, you can use either term as a search term in the search box at right, to find my earlier posts on those topics.

The crew of a local freight train, pausing to work in a particular town and with only a single packing house in that town, would certainly know where the empty reefer in their train was headed. So if the train was like the one below, arriving in my layout town of Santa Rosalia and pulling down to the depot to confer with the agent, the crew didn’t need to be told about the reefer.  The agent, who had placed the order for the car, could tell them where it went, but they know very well that it’s headed for Coastal Citrus, at left of this view.

The locomotive here is SP 2344, a Ten-Wheeler, and today the local crew has been saddled with one of SP’s cordially disliked boxcar cabooses, SP 18037, a “temporary” conversion and a lot less comfortable to ride than a conventional caboose. It’s a Westerfield model.

And of course both agent and crew assume that the car they are delivering was correctly chosen by the Car Distributor to fulfill the order. If pre-iced, that was probably done at the ice deck in the local train’s departure town. So they can spot the empty with no further thought.

But what if the situation is more complicated? There may, for example, be two packing houses, both of which have requested empties, and perhaps, as in my layout town of Ballard, one of them (Guadalupe Fruit) has requested a pre-iced car and the other (Western Packing) wants an un-iced car. Now there may be two or several empty reefers in the train. But unless the crew sees water coming from the drain chutes on one of the cars, they can’t tell from the outside which car is which. No problem, the agent can tell the crew which is which.

Here the Santa Rosalia local is just arriving in Ballard, with, as usual, the locomotive running in reverse on the outward leg of the job (it’s SD&AE Consolidation no. 103). Where the two reefers are to be spotted is not yet known to the crew, as there are four packing houses here. They will get the answer from the agent.

But it can be even more involved. I am well familiar with the idea that a group of packing houses, all packing the same crop, will receive the exact same car types. This is implemented at the La Mesa Club’s famous Tehachapi layout in San Diego, when one switches Arvin. The Arvin switch job goes out with a string of 30 reefers, all nominally identical, and spots them at about 8 packing houses, all of them loading potatoes.

I’ve described this process, devised I believe by Jason Hill, before: http://modelingthesp.blogspot.com/2012/11/operating-on-tehachapi-part-2.html . Below is a photo from that post, showing two of the large potato houses (only in the form of paper signs when this photo was taken), and their triple-track sidings. Just as at prototype Arvin, the houses load potatoes in three-abreast cars. 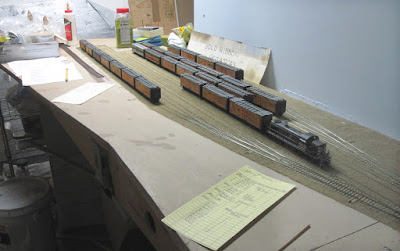 Naturally, it doesn’t matter which house gets which car; but it will matter when the cars are loaded, so the switch crew has to make up a switch list of which cars came from which houses, and then the various destinations of each house’s cars can be added to outbound directions. In the foreground of the photo above, you see the switch list being compiled by the conductor of this job, which identifies who loaded which car.

But what if the cars are not interchangeable? In my visit last October to the Twin Cities, I had the pleasure of operating on the layouts of Mike Jordan and Bill Jolitz, both of whom have devised interesting challenges for crews spotting empty reefers. (My brief description of both is at this link: https://modelingthesp.blogspot.com/2021/11/out-of-town-operating-part-3.html .) Mike in particular has a scheme where some shippers have ordered fan-equipped cars, and the switch crew has to select from the available empties to supply the correct cars.

This could well be realistic. Car fans were a great help, both in speeding the initial cooling of a load, and also in making and keeping internal load temperatures uniform throughout the car. In particular, any shipper needing pre-iced cars could well also order fan cars; so might shippers of denser produce like melons or citrus, for which temperature uniformity was more of a challenge.

So if a crew has several empty reefers to deliver in a particular town, and the agent message merely directs them to place the car(s) with fans at one shipper, how do they identify those cars? During one period, PFE painted the fan shafts, or a metal plate representing a fan, black, and these are easy to see above the left-hand trucks, as in this photo of a Class R-40-26 model: 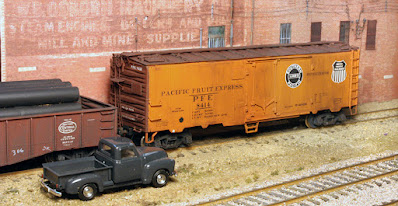 But farther into the 1950s, as the all-orange sides came to include fan shafts or plates, you have look more closely. For a time, an outline symbol was used, as shown below on an InterMountain model of Class R-30-18: 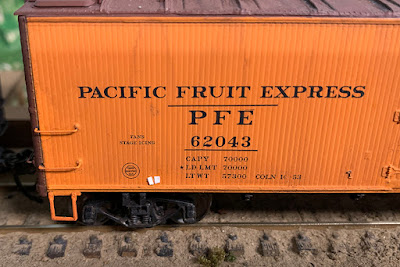 I will experiment with crew messages and other means to direct crews to spot the fan cars at the right shipper. If any of it seems interesting I will report further in a future post.