In the previous two parts of this series of posts, I described the visit of five California operators to the La Crosse, Wisconsin area and the four layout on which we operated. The second of those posts can be found at this link: https://modelingthesp.blogspot.com/2021/10/out-of-town-operating-part-2.html . We then went on to the Twin Cities for four intense operating days. Our main hosts and organizers were Rich Remiarz and Joe Binish, of whom more later.

That first day there, we split up to operate on two smaller layouts, both really interesting and fun. Both happen to be set in California and both emphasize perishable shipping, thus lots of reefer operation. First up was Mike Jordan, with whom I have corresponded by email over the years. His nice small layout is called the Santa Maria Valley Industrial Railroad. He built a packing-district module that is all perishable switching, shown below. I of course wanted this job, and definitely had fun doing it. 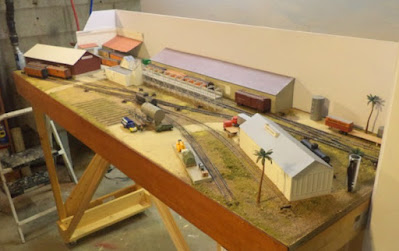 Space is tight, and careful planning is needed to switch the sidings in a workable order. But it’s really interesting to meet all the needs for clean-out of cars, icing, and loading of shipments. The module connects through the wall at right to the rest of the layout. A terrific assignment!

The second layout of the day was that of Bill Jolitz, whom I’ve known for some years, and have operated together with at ProRail and other events. I was really looking forward to seeing Bill’s layout, called the San Joaquin Short Line Railroad, set in the southern San Joaquin Valley during World War II, and I was not disappointed.

What a lot of operation! I had been advised to work the “Cojones Reefers” local to the town of Cojones, and did so. Great job! You see Cojones in the foreground below. In the background, Ed Slintak is working the Cojones Third Street job, also an absorbing challenge. The blue tape designates streets. 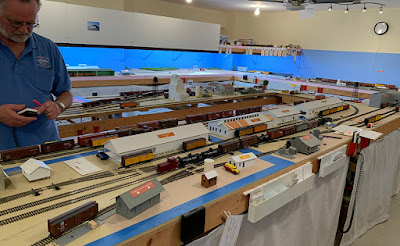 One of the packing houses in Cojones is a shipper of grapes, and with a layout set in the 1940s, and located in Steinbeck country, I understand how Bill couldn’t resist this company name. 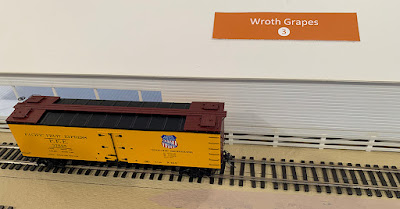 I asked Ed to take a photo of Bill and me together in the layout room, and I show it below (that’s Bill on the right). Both the layouts this day were great fun, and tapped into my own favorite activity, industry switching.

The following morning we went to Greg Hippen’s layout, beautifully portraying the Pennsylvania Railroad’s Schuylkill Branch in the transition era, a very nicely done layout and with a very full operating scheme. I handled Carbon Yard (shown below), and was kept quite busy with arriving and departing trains, along with local industrial switch jobs. And the yard was just big enough!

These were all really engaging layouts, and we all had fun — I know I did. And there was more to come! as I’ll show later.