I had the privilege of attending this year’s ProRail operating weekend, normally held in April but of course delayed by pandemic restrictions. It was held in the Detroit area, which is home to some excellent layouts. I was assigned to three fine ones, but today I want to offer an appreciation of just one of them.

My favorite layout on this trip, among those I like best in the whole country, is Bill Neale’s layout depicting the Pennsylvania Railroad in 1939, in the tri-state area of western Pennsylvania, the West Virginia panhandle at Weirton, and into Ohio at Steubenville and Mingo Junction. Though it’s not a large basement, Bill has masterfully designed the layout to include a significant amount of mainline running and some excellent switching areas.

An important feature is the Pennsy’s Panhandle Bridge over the Ohio River. Bill has modeled a good representation of what is actually an immense structure. Still, this is about the limit of what is practical in model form, and it creates a real “signature” scene on the layout.

My job assignment in the morning was the Steubenville switcher, which is an interesting and challenging job. As with any local switch assignment, your first step is to find the runaround track(s) and identify any “spare” trackage where cars can be stashed during switching moves. A tidy Pennsy 0-6-0 was the power, seen here across the platforms of the Steubenville depot. 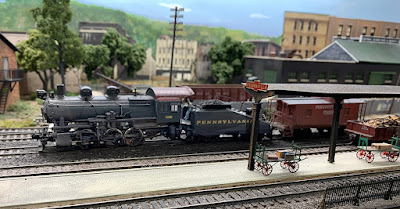 Matt Thompson took a photo of me, about photo center, working the Steubenville job. That’s Herb Biegel at right, in charge of the mainline train you see on Track 1 at photo center (and that’s Paul Dolkos in the distance). My switcher is at the far left of this view. 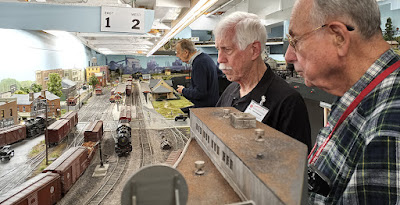 What I was switching in the view above is the large Steubenville freight house, which has the freight cars spotted inside the building, creating certain challenges in figuring out what to pull and where to spot inbound cars. The building’s outside is shown below. Team tracks are in the foreground. 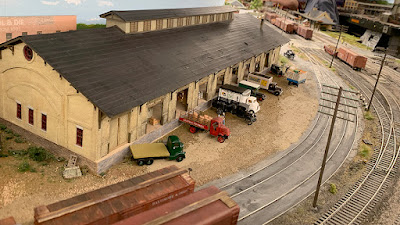 The modeling of the entire Steubenville scene is quite well done. To give a single example, I will show this street crossing through the yard. Bates Building Materials is at left. 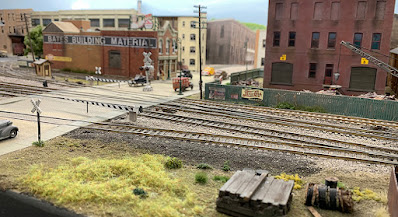 There are a number of well-chosen and handsome industries around the layout. Weirton Steel is by far the largest, but many smaller ones are seen too. Shown below is Barrett & Son, a nicely rendered structure with excellent signage. We know exactly what this business does. 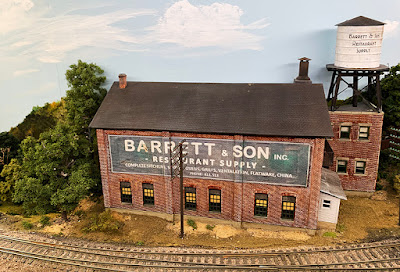 I would also mention Collier Steel (“fabrication and finishing”) which receives coils of sheet steel, but also receives coal for its furnaces. It ships out fabricated products. A classic type of industry in this region.

Bill has been one of my heroes in model railroading since his 2009 article in Model Railroader gave me the impetus to start designing prototypical waybills, because of his ingenious use of baseball-card collector sleeves. That was my inspiration on waybills. But his layout goes enormously farther that its waybills, and as I hope these photos convey, speaks for itself.

Posted by Tony Thompson at 9:15 AM