As many of you already know, Signature Press is closing at the end of this year. Throughout its life, Signature has been run by Bob Church and me as equal partners. Bob served as Business Manager as well as overseeing order fulfillment and shipping. I was Editor as well as managing design and print production. I also did layout for about half of our 49 titles, and on the titles I didn’t lay out, I managed layouts by freelance people, via style sheets. Decisions on titles submitted to us were made jointly.

Very early on, the amount of work involved in doing shipping from homes became overwhelming, and we have used commercial “pick, pack and ship” companies to both store and ship our inventory. But the front end of shipping was order taking and preparing orders for the shipping company. Our long-time (and only) employee doing this work is Kim Stein, and she has done a great job.

Of course, an essentially home business like this involved the support of our wives. Shown below are, at rear, myself and Bob (the tall guy), with Bob’s wife Jeanne at left foreground, Kim in the center, and my wife Mary at right. This was taken at an SPH&TS convention where we had a table and were selling books. This photo has for some years been included on the Signature Press website ( www.signaturepress.com ). 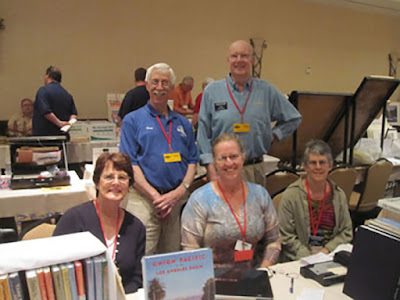 From the very beginning, even before we had done a single book, Bob and I agreed that our primary goal was to publish high-quality books. That means attractive-looking, well-designed, authoritative, and not least, solidly produced by good printers. We knew that this would mean pricing that was not exactly at the bargain level, but we hoped that if quality was perceived, it would overcome any price resistance. And from the beginning, we intended that the business was not primarily to make money, but to do good books, hopefully without costing us money.

Maybe because both Bob and I are authors ourselves, we have always taken the position that “it’s the author’s book,” and though editorial details may need adjustment, the voice should be the author’s, and we tried always to do it that way.

From collaborating on the book Pacific Fruit Express before its publication in 1992, Bob and I learned that we could work together smoothly, and that remained true for our 30 years in business. In the course of those years, we published five additional books by Bob on Southern Pacific topics, and six by me (five of them about SP freight cars).

In addition, we were proud to publish five of John Signor’s definitive books about SP divisions, to republish books by Richard Steinheimer, Chard Walker and G.M. Best, to publish Jack Burgess’s Trains to Yosemite, and to bring out Ed Kaminski’s fine books on AC&F, Magor, and Pullman-Standard (and his collaboration with Richard Hendrickson, Billboard Refrigerator Cars).

There were books we published despite serious doubt whether they would prove to be commercial, because we believed they deserved to be published. Two of those, Phil Kauke’s Visalia Electric and Bill Kaufman’s State Belt, surprised us by selling well, despite our doubts. This illustrates, of course, that book publishing, whether by small publishers like us or by the “New York giants,” remains hard to predict accurately.

It’s interesting that our first book, Pacific Fruit Express, was our best seller. It was reprinted twice and has sold over 5000 copies. A close second is John Signor’s book, Southern Pacific’s Coast Line. Like all publishers, we too have books that were our favorites, maybe because they came together so nicely, maybe because they just hit some kind of a spot. For me, these included Ed Kaminski’s American Car & Foundry, the two volumes we added to David Myrick’s Railroads of Arizona series, and Harre Demoro’s Sacramento Northern.

Shown below is a shelf of our first 32 titles (Pacific Fruit Express was revised and corrected for its second printing, so the second edition is shown). All but one are hardbound books.

The remaining 17 titles are shown below. Ordinarily I would refer readers to our website for more information about the individual titles, but as they have been selling out, the website is in flux. The intention is for all the book entries eventually to remain on the site as a helpful reference.

And speaking of selling, we are now disposing of the inventory in a sale, but if you want to order, please be patient, as the flood of orders has been hard for Kim to keep up with.

Bob and I are both in our 80’s now, and though we still love railroad books, we feel like it’s time to call it a day. We’ve enjoyed the work and have been proud of our books. We know many readers have enjoyed them too, and that’s perhaps the best valediction we could have.

Posted by Tony Thompson at 9:22 AM