In my original post on this topic, I summarized some of the history of the helium cars and provided a link to a very useful web page by Jay Miller. I also described the early part of the modeling project to upgrade an AHM model to “layout quality” for my use. An important part of that early modeling work was kitbashing to create suitable trucks. That first post may be viewed at this link: http://modelingthesp.blogspot.com/2012/04/helium-cars-part-1.html .
In the second part, I described the completion of detailing, including replacement of poor details on the original AHM model. Completion of those detail upgrades made the car ready to paint. Here is a link to that Part 2 post: http://modelingthesp.blogspot.com/2012/06/helium-cars-part-2.html .
It has been some six months since I last posted about this project. Though I will confess that some of my projects do take this long or longer, this one was held up in making sure I would have accurate and complete decals for lettering. More on that in a moment.

Since my modeling year is 1953, which falls during the Navy ownership period of the helium cars, I used Floquil “SP Lettering Gray” for my car. Probably the paint was darker gray than that when new, but cars in service awhile definitely were faded, so this color seems all right to me. I hand-painted all safety appliances black, including brake wheel and the ladder stiles and rungs, sill steps, and end surfaces of end sills, as shown by the prototype photos in both previous parts of this series, cited in the paragraphs above.
Here is the car at this point, painted gray overall, with its modified and painted trucks and the black trim applied. 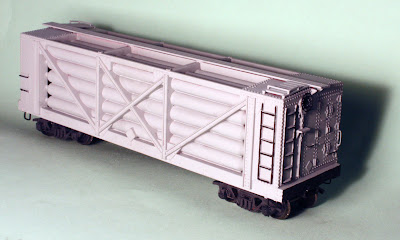 Next comes lettering. Below is Jay Miller’s lettering drawing for the Navy era. The same drawing is available at higher resolution for download on line at: http://www.atsfrr.org/Reviews/HO/Freight/Helium/Index.htm . Scroll down to about the middle of the web page to see the download of Jay’s clinic handout. Note in this drawing the length over running board ends, 42 feet, 6-3/4 inches. 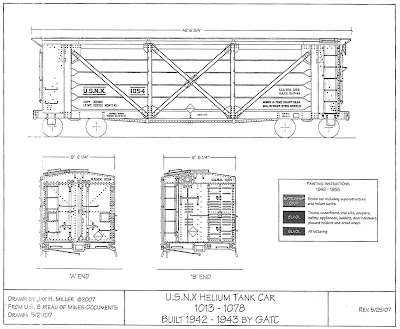 I was lucky in having picked up one of the brass helium cars from Pecos River Brass (representing a 1961-built car), and the decal set included could be stretched to do more than one car. But I preferred a new set for the USNX reporting marks. Commercial decals were first produced by Jerry Glow, and these are shown in a low-resolution version below. Tichy Train Group has now purchased all of Jerry’s decals. If you want a set of these, they can be purchased from Tichy’s web site, which is at the following link: https://www.tichytraingroup.com/Shop/tabid/91/c/tank-car/p/10127-6-us-navy-helium-tank-car-6-sets/Default.aspx . 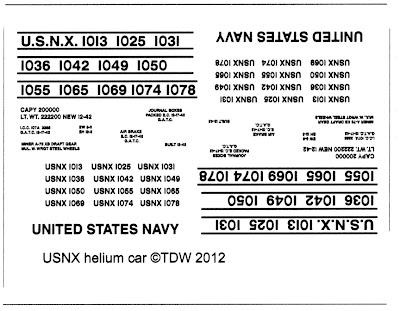 I went ahead with these decals to letter my model, following the lettering drawing shown above for major components of the lettering. The decals are designed for, and I wanted to letter my car for, the batch of helium cars built by General American between November 1942 and August 1943, 66 cars numbered 1013–1078, the largest group among this car fleet. The handout by Jay Miller, cited above, contains a complete roster.
As I said, I lettered the car in accord with the drawing, but I did make an exception for some minor items of lettering, which I positioned according to photos. In addition, I added fresh dates to the repack and air brake service blocks, since these would certainly not be neglected in the time from building the car in 1942, until my modeling year of 1953. I used a Sunshine “reweigh and repack” set for PFE, thus obtaining the needed black lettering. Lastly, I applied a light coat of Floquil Dullcote to protect the lettering.
At that point the car was ready to be weathered. I accomplished this with my usual method of washes of acrylic colors, as briefly described in the handout to Richard Hendrickson’s and my weathering clinic, which is available at: http://modelingthesp.blogspot.com/2011/10/weathering-clinic-handout.html .
Once weathering was complete, I added route cards to the route card boards (see: http://modelingthesp.blogspot.com/2011/11/chalk-marks-and-route-cards.html ) and also added a placard for Compressed Gas to one side of the car, with an Empty placard on the other (I discussed the use and application of model tank car placards in an earlier post, at: http://modelingthesp.blogspot.com/2012/03/tank-car-placards-modeling.html ). I completed these steps with a final overcoat of Floquil Dullcote.
The completed car looked like this, on the side with the “loaded” placard. You can click to enlarge the image, and see the modified air brake and repack stencils.

The hand-painted safety and door hardware came out looking all right, in my opinion. Here is a view of the A end. The B end can be seen above. 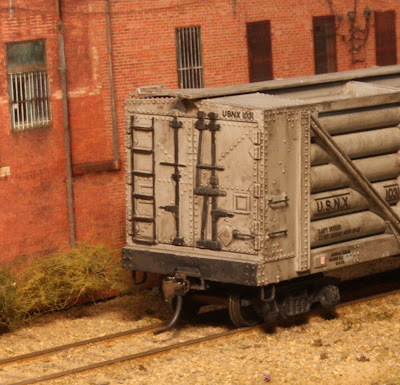 This has been a satisfying project, to create a reasonable representation of a helium car. Helium carriers like this were certainly not common in most of the United States in the transition era, but a number of coastal areas in which Navy blimp patrols operated did receive helium, as did many parts of the aerospace and scientific research communities. The prevalence of these cars in the Far West in particular is well known, so this car will be most welcome among my freight car fleet. And warmest thanks to Jay Miller and Jerry Glow, for their contributions.
Tony Thompson
Posted by Tony Thompson at 12:03 PM