In prior posts, I have discussed modeling the various head-end cars which ran in SP’s mail train on the Coast Line. This train, numbered 71 and 72, was officially titled in employee timetables as merely Passenger, but many employees (and railfans) called it the “Coast Mail.” I began discussing the broad topic of SP passenger car modeling, with an introductory post (at:  http://modelingthesp.blogspot.com/2012/10/choosing-model-sp-passenger-cars.html ). Then I presented some specifics, along with model photographs for a few individual cars of the Coast Mail, in a follow-up post, at: http://modelingthesp.blogspot.com/2012/10/modeling-sp-passenger-cars-head-end-cars.html .
The Coach Yard has now announced the upcoming delivery of an entire Coast Mail consist of eight cars, and all cars will also be available separately, with a variety of paint and lettering options available (Dark Olive, Two-Tone Gray, Daylight, etc.). You can see the announced car descriptions at this link: http://www.thecoachyard.com/Pages/Equipment/SPCM.html . These of course will be all-brass models, no doubt with the excellent detail for which Coach Yard models are known, so they will not be cheap. Prices have not been announced as yet, but it is not too soon to reserve these cars with your favorite dealer.
Speaking for myself, I will certainly want to choose a couple of these interesting head-end car choices, especially the 70-foot baggage-horse car which will be included. These were almost always present in the Coast Mail, judging from photos and from information in Ryan and Shine’s book, SP Passenger Trains: Vol. 1, Night Trains of the Coast Route (Four Ways West, La Mirada, CA, 1986). SP owned both 70-foot and 80-foot BH cars, and here is a chance to get a fine model of one of the short ones.
Specific information and good photos of those cars can be found in the SPH&TS book, “Head End Equipment,” Volume 3 in the series Southern Pacific Passenger Cars (2007). Chapters 11 and 12. Like all five volumes of this series, Volume 3 is an excellent resource for modelers. Among other things, it shows that most head-end cars until the mid-1950s were painted SP’s Color No. 1 in the Common Standard No. 22 color series, named Dark Olive. It really is a dark color in indoor lighting; here is the drift card and its Bowles envelope. (I presented some background about drift cards and the Bowles Corporation in a previous post about SP colors; here is a link: http://modelingthesp.blogspot.com/2012/10/modeling-sp-structure-colors.html .) 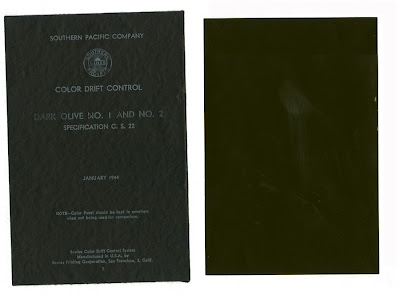 For those who already have, or are looking for, unpainted SP head-end cars, the question naturally arises as to how to duplicate SP’s Dark Olive color. There are at least three ways to go. First, several versions of Great Northern “Empire Builder Green” match well to the SP color chip. Many GN fans will tell you that this color is merely Pullman Green, but the true Pullman color lacks the brown and yellow tones of olive green, and does not match the SP chip. Second, military Olive Drab paint is often quite close to the SP chip, especially the current Floquil enamel color.
But probably the best solution is approach number three: Star Brand paint from P-B-L, item STR-29, which is matched to the SP and UP chips for Dark Olive. I like this paint, and it goes on smoothly with an airbrush, so I would recommend applying it that way. This paint can be purchased on-line from P-B-L, at: http://www.p-b-l.com/ . To see the paint list, click on “online catalog” and then in the “Categories” window, select “paint / cement,” and scroll down to STR-29.
I have also been asked to recommend decals for SP heavyweight equipment (and particularly the head-end cars I’ve been discussing). By far the best HO decal set in my opinion is the Thin Film set HO-160, described as being for Harriman-era cars but in fact for heavyweight cars generally, in Dulux Gold. These are normally available only through hobby dealers, but you can see the catalog at this link: http://thinfilmdecals.com/ . Here is a low-resolution scan of the decal sheet (the set contains two of these): 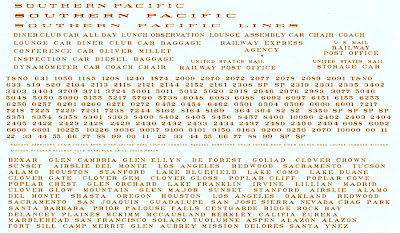 Much of the sheet is occupied by a fine selection of SP-appropriate Pullman car names (lower part of the sheet) but practically any other passenger car type can be lettered with this set. Do note, however, that you can really only letter one car per decal set, though you will have lots of lettering left over.
As mentioned, the color of this lettering is Dulux Gold, which became SP’s standard lettering for Dark Olive cars in about 1936, replacing the former gold leaf. (Thus modelers of the post-1936 SP will not want to use “metallic gold” decals.) As most modelers know, this is not a metallic color, but is a paint intended to convey the tone of gold-leaf lettering. I have heard the statement that “Dulux” is a shade of gold, but actually it’s a DuPont trade name for a particular formulation of paint. All the colors in that paint line have their name prefixed by “Dulux.” Thus there would be a Dulux Daylight Orange, Dulux Daylight Red, and so on.
I have a couple of SP head-end car bodies which need painting, and when I do that project, I will probably write a post about how it goes. Until then, the foregoing should give you enough background to get started.
Tony Thompson
Posted by Tony Thompson at 2:19 PM