Last year, I wrote a general post about choosing, and then modeling, a specific era. One segment of that post (if you wish, you can view it at this link: http://modelingthesp.blogspot.com/2011/04/choosing-and-modeling-era.html ) was about vehicle license plates. In my post today, I will expand on this topic.
As I said in that previous post, there are excellent resources on the Internet about vehicle license plates for all states and all eras. My own modeling is set in California, and there is a useful and quite complete Wikipedia entry about history and use of California plates, including my modeled year of 1953 (see:  http://en.wikipedia.org/wiki/Vehicle_registration_plates_of_California). There is also a site offering reproduction plates for many states and many years, available at: http://www.licenseplates.tv/index, and this site not only has a lot of history for a wide range of states and eras, but also has good images of license plates to view. The site used to include California plates among all the others, but for some reason they do not do so at the moment. If that’s what you want, you might check back from time to time to see if they are restored to the site.
But for whatever state you model, or whatever year, you can have accurate automobile and truck license plates—if you wish. Obviously if you model “the 1950s,” there is no license plate that fits the whole decade, and you might just as well omit license plates altogether. But if you want to have them, it may be helpful for me to describe how I made mine. First, the history.
In brief, until 1942, California issued complete new plates every year. Then from 1945 into the late 1950s, new plates only came out every several years, and metal corner tags were issued for each intermediate year. This corner tag covered up the year stamped in the original plate, and contained the current year. As it happens, California had issued a new plate in 1951, which was black with yellow numbers. In 1953, a lower right corner tag of stamped metal was issued, white in color, with the number “53” on it, covering up the “51” part of the year on the original stamped plate. Thus by 1953, all 1951 and 1952 plates carried white corner tags for 1953. But new plates issued in 1953 did have the 1953 date stamped in. That means I need a mixture of some new 1953 plates, and a lot of corner-tag plates, since all cars older than 1953 would have the 1951 plates with corner tags.
To illustrate, here is an image of a California plate with a 1953 corner tag.

Either of these formats would be appropriate for my models. I wanted also to have an occasional out-of-state plate, though in 1953 I would guess these would have appeared rarely along California’s Central Coast, fairly far from the main tourist areas. Here is one example, a Colorado plate for 1953, with a nicely contrasting shape and color, compared to the California plates. 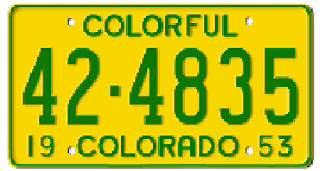 Finally, commercial vehicles received a different plate in California in those years, such as this example, which I will use on a delivery truck. These also had corner tags for the same reason as automobile plates.

In 1951, the California plate was 6 by 14 inches, which you can learn from several web sites, and I can verify since I was able to find an original 1951 plate in an antique store. In HO scale, this is one-eighty-seventh as big, or about 0.07 by 0.161 inches. So if you have digital images of plates, simply reduce them to these dimensions (other states and other years had different proportions of width to length). I recommend setting them to 2000 dpi if you can do so, since otherwise they will not be readable. I then placed a whole bunch of different plates on a single layout page, and had them printed on glossy paper at my local copy shop, which has a high-resolution digital color printer. Cut them out and glue them onto your model trucks and automobiles.
Here is a photograph of some of my HO vehicles with their license plates. You can click on these images to see more detail. 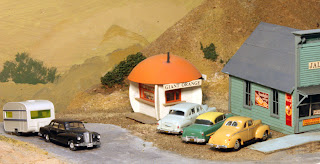 And yes, they are indeed readable, a you can see in this close-up, though the model 1953 Chevrolet doesn’t look too great from this angle. This plate is of course a new 1953 plate with no corner tag. 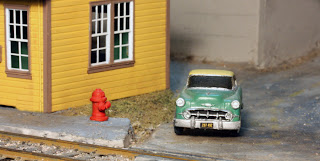 I know there are those who regard the whole topic of HO-scale vehicle plates as way excessive refinement, but I have found it fun to research, learn about, and create accurate automobile and truck license plates for my modeled era and locale. The specifics of my 1953 California plates are only presented to illustrate what can be done if you wish.
Tony Thompson
Posted by Tony Thompson at 5:13 PM