There have always been modelers’ jokes about helium cars, all the way from “what’s with the carload of torpedoes,” to the creaky old saw, “it’s lighter full than empty” (not close to true, by the way). And some modelers seem to think that helium cars were as rare as hen’s teeth on the prototype. But helium had a number of aerospace uses, starting with U.S. Navy blimps for coastal patrol work, and much more extensively in rocket engine and experimental science work. Since there were a number of aerospace facilities in California after World War II, the helium car is actually a realistic and characteristic freight car for modelers of any west-coast railroad and certainly the Southern Pacific.
The “torpedoes” are in fact high-pressure tanks. The helium is shipped under considerable pressure (3000 to 4000 pounds per square inch), and the thick-walled tanks (30 in number in most of the helium cars) added up to a very substantial weight, around 235,000 pounds, an extremely heavy car in the 1950s. Many of the cars still exist, some at museums; a number were still in service just a couple of years ago (helium is still used for several purposes at Cape Canaveral).
Most helium in the U.S. is found in natural-gas fields in the Texas-Oklahoma Panhandle region, and thus is shipped from there to wherever it is needed. Originally helium extraction and sale was controlled by the federal government for Navy use. Major plants were located on the Santa Fe and the Rock Island. A listing of the principal plants, and some of the major destinations, is included in the Jay Miller web page cited just below. Today, however, the federal government is no longer the supplier of the helium.
There are a number of resources on this topic; I especially recommend the sensible and complete summary page prepared by Jay Miller for the website of the Santa Fe Historical & Modeling Society. It can be viewed at: http://www.atsfrr.org/Reviews/HO/Freight/Helium/Index.htm . At that site you can also download a copy of Jay’s clinic handout. Jay includes a 1953 photo of car 1019 as it was at that time (perfect, of course, for me, since it matches my own modeling year). Here is that image:

The car is lettered for the U.S. Navy, reporting mark USNX, and at that time all the cars in service were Navy-owned.
The large doors at the A end of the car provided access to the fittings on the end of each tank. Here is an unloading view of that area with doors open. 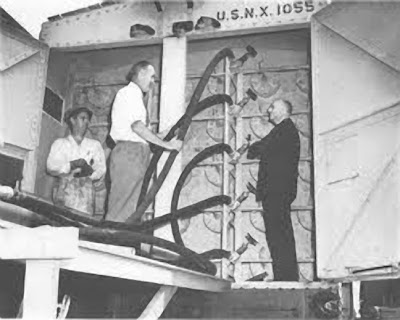 In 1955, the Navy turned over most of the fleet to the Bureau of Mines, Department of the Interior, with some cars going to the Atomic Energy Commission. The Bureau of Mines, under the title “Mines Helium Activity” or MHA, continued to produce and ship helium, now in cars with the perhaps obvious reporting marks MHAX. The cars were also repainted from their former Navy gray to silver within a few years after the handover.
There have been three models of these cars in HO scale, to my knowledge. First was the Ambroid “One of 5000” kits, second series, which of course was a wood model with all the finishing challenges of any wood kit for a steel car, and the tanks looked like sharpened pencils. The side bracing was wood channel shapes with no rivets, and details were crude by today’s standards, though considered good when the model was released in the early 1960s. The kit could certainly be upgraded.
The second model was the AHM plastic car. Instead of the later 45-foot length, AHM delivered a 40-foot car (correct for 1942-built cars) and used their standard 50-ton car trucks under it, but much of the detailing was far superior to the Ambroid version, with a very reasonable representation of the complex ends, even though the side and top framing is cast on rather than see-through.
Lastly, Pecos River Brass did a brass version of these cars, but they chose a 1961-built Magor car as their prototype. It does look very much like the older cars but differs in some details. So all three models contain real compromises for a 1950s modeler, and any would have to be considered a stand-in.
Contemplating these three models, the interesting challenge is the AHM car. It does offer a reasonable starting point for a “mainline” car, despite its cast-on details. When AHM sold these, they were often molded or painted in dramatic colors, such as New York Central bright green. This view of the box end shows the four railroad names offered, none of which were prototypical.

Here is the SP-lettered car I found at an auction, missing its running board (which is no loss). The model of course has no relation to any actual SP car.

The car for my era should be gray and have a wood running board and Ajax hand brakes. The model’s usual AHM “Talgo” trucks go into the trash–well, not quite yet, as their journal box covers are salvaged, see below–and the underframe is modified to receive proper trucks and couplers, as described in a previous post (see: http://modelingthesp.blogspot.com/2012/03/replacing-snap-in-trucks.html ).
Another issue to be resolved is the car weight. These cars come with a thin sheet steel weight, as shown here; this weighs only three-fourths of an ounce, and leaves the car seriously underweight.

I simply removed the weight, bent it in half and hammered it flat. This was attached to the center of the interior floor with model airplane canopy cement (excellent for joining dissimilar materials), and then I added a 5/8-inch steel nut, which weighs about one ounce, bringing car weight up to 3-3/4 ounces. Since the recommended NMRA car weight is 4 ounces for a 40-foot car, I think it’s close enough.
Trucks are a challenge. The car really is a 100-ton car, and trucks of that type (larger journals, for one thing) are uncommon. Here is a view of a helium car which stood on a siding in Oakland, California (on the siding of Pacific Oxygen Company on West Grand Avenue) for many years, still with “period” solid-bearing trucks. The photo was taken by John Rodgers. 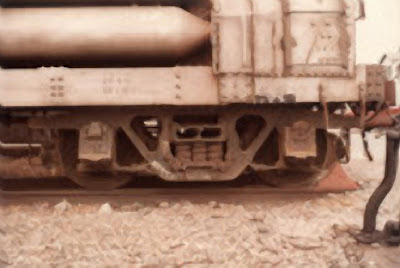 These trucks are remarkable in some ways: they are Andrews-design 100-ton trucks with triple spring groups, and have extensions at each end to support the clasp brake shoes (brake shoes on both sides of the wheel) needed for adequate braking of these very heavy cars.
In later years, the cars still in service naturally got roller-bearing trucks, and here is an image taken by Gene Martin at Vandenberg AFB about 1970, showing a similar-design truck but of a more modern one-piece sideframe design. (The Jay Miller handout mentioned above has considerable information on trucks.) 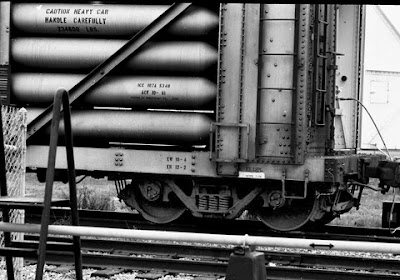 In both photos, incidentally, the black-painted end sill can be seen (I will address paint and lettering in Part 2 on this topic).
The modern trucks in particular will suggest to modelers the truck produced by Model Die Casting for their model of the SP Class G-100-1 ore gondolas, which also had the protruding “horns” at each end for clasp brakes on the 100-ton cars. It also has the triple spring groups and is thus attractive for conversion to this car’s trucks.
You can do the conversion this way. First, slice off the roller-bearing caps with a hobby knife, then slice off the plain-bearing journal box covers from the car’s original trucks that you’re throwing away (or some other snap-in truck, if your helium car came with roller-bearing trucks). File mating surfaces flat, and attach the new box cover with CA or canopy cement (styrene cement won’t work on Delrin). Then mock up the Andrews tie bar with a piece of styrene scale 1 x 4 or 1 x 6, again using CA. The result isn’t exact but it looks about right (not yet repainted):

That completes what I want to describe for Part 1 of this topic. I will continue with completion of the modeled car in Part 2.
Tony Thompson
Posted by Tony Thompson at 10:40 AM