Waybill systems for model railroads have a number of components. In several prior posts on this blog, I have discussed design and preparation of various waybill formats which are more prototypical. I have also discussed the scheduling of car movements which are controlled by those waybills (for example, at: http://modelingthesp.blogspot.com/2011/11/operations-demand-based-car-flow-2.html ). A full analysis of repeating cycles of movement, however, may be needed to recognize patterns which can develop. These may be the intended and desirable patterns, but they could also be unexpected and undesirable patterns.
Such a problem arose on Otis McGee’s layout, and I will describe it, and its apparent solution, not because Otis’s layout is necessarily typical of anyone else’s, but because it illustrates the point of analyzing how scheduling patterns develop over multiple sessions, and then to decide, if the pattern is undesirable, how to counter it.
I will begin with a schematic of Otis’s layout, in fact the schematic which has been prepared for visiting operators and posted at various places around the layout, especially at Dunsmuir Yard, where train make-up takes place. As you can see, the layout is operationally Y-shaped: 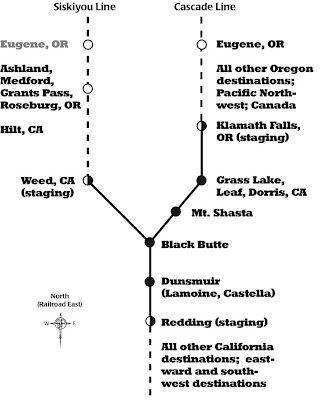 Trains coming from the south (railroad west) leave Redding staging and arrive at Dunsmuir, where they are sorted into trains to travel over either of the two northward (railroad eastward) routes, the Siskiyou and Cascade lines. Also separated out are cars for on-layout switching, which are handled by various locals and turns.
(To see the physical layout and a moderately current track plan, the best published version is in the 2011 issue of Kalmbach’s Great Model Railroads, pp. 36 to 43.)
The destinations listed on the schematic, shown beyond the names of the three staging locations, are intended to help visitors know which waybills go to which line, even if they are not familiar with northern California and Oregon geography. Example: where does a car waybilled to Medford, Oregon, go? The schematic has the answer. And note that although cars can reach Eugene, Oregon via the Siskiyou line, through cars for Eugene or beyond would normally move on the Cascade line, which is why the name “Eugene” is grayed out on the Siskiyou branch of the map.
Now consider a train from Redding, arriving at Dunsmuir, with a mix of car destinations. They will usually be about half to two-thirds Cascades, since that was the “main route” north and carried the bulk of traffic, and the remainder will be divided between Siskiyou and local cars. As more trains arrive, eventually there are enough cars in Dunsmuir yard to send out trains with all Cascade cars, or all Siskiyou cars, and these traverse the layout and go to their respective staging. So far, so good.
In the next operating sessions, those Cascade and Siskiyou trains will have had their waybills cycled. If, as is presently the predominant case, they have just a pair of waybills or Empty Car Bills in their sleeve, the “other” bill will direct them southward (railroad westward) via Redding. When they arrive at Dunsmuir, these trains can be forwarded as-is to Redding staging. Again, so far so good.
The problem arises in the next session. Now, each train at Redding, when its waybills are cycled, will contain all Cascade or all Siskiyou destinations, carried over from their previous sorting at Dunsmuir. This is not good, both because it’s unrealistic, and because it eliminates switching work at Dunsmuir. There are a number of solutions, but one of them, to switch and rearrange trains in staging, is neither practical nor desirable.
Here is what we are doing about it. A certain proportion of cars have been given additional pairs of waybill documents in their sleeves, so that when waybills are cycled, say after reaching Cascade staging and returning to Redding staging, the next cycle brings into play a waybill for a local or Siskiyou destination. Two cycles after that, it will again be a Cascade destination. Creating additional waybills is also an advantage for any car which is at all distinctive, so that, for example, that Lake Superior & Ishpeming car doesn’t always carry a load from Bend, Oregon.
Creating the additional waybills need not be onerous, since the existence of a “pairs list” for Otis’s freight car fleet (as I described earlier at this link: http://modelingthesp.blogspot.com/2012/02/waybills-17-pairs-list.html ) makes selection of additional origins and destinations easy.
For example, let’s say we have this southward boxcar load, with the car returning empty to Portland for loading (a Cascade Line cycle):
from: Gladding McBean, Portland, OR;   cargo: glazed tile
to: Valley Brick & Tile, Fresno, CA
Now I can go to the pairs list and find a Siskiyou Line cycle to balance it:
from: Southern Oregon Plywood, Grants Pass, OR;   cargo: plywood
to: Litchfield Lumber, Glendale, CA
and of course there would again be a northward Empty Car Bill for loading at Grants Pass. This box car will now travel alternately on the Cascade and Siskiyou lines.
As already stated, these problems, and the steps to their solution, are specific to a single layout, but are intended to show the importance of understanding how repeated cycles of car movement with waybills need to be examined, and any patterns understood, to ensure that the desired patterns are being achieved.
Tony Thompson
Posted by Tony Thompson at 10:37 AM