In a previous series of posts, I described a number of loads for open cars, starting with gondolas, including loads of pipe (you can read it at: http://modelingthesp.blogspot.com/2012/01/open-car-loads-pipe-in-gondolas.html ), and I also described how I build loads of bulk materials (see: http://modelingthesp.blogspot.com/2012/02/open-car-loads-bulk-materials.html ), and even a little bit about lumber loads in gondolas (at: http://modelingthesp.blogspot.com/2012/03/open-car-loads-lumber-in-gondolas.html  ). There are others as well, which you can find by searching on a term such as “open car loads” in the search box at upper right of this page. But loads for flat cars have been only lightly treated, just touching on crate loads (see: http://modelingthesp.blogspot.com/2012/03/open-car-loads-crates-and-machinery.html ), though lumber is perhaps the quintessential flat car load.
Owl Mountain Models has just released a really excellent new kit for flat car lumber loads, kit no. 3001. These kinds of loads, if built board by board, are really a lot of work, as well as consuming quite an impressive amount of stripwood (ask me how I know). After doing that job once, I pretty much decided that once was enough. Now this Owl Mountain kit immensely simplifies the task. You can see some pictures of the kit and a completed model at their website, http://www.owlmtmodels.com/lumber/3001.html , but I will show the basics here also.
Here is the package you get with kit no. 3001, which is priced at $24.95. The poly bag alone is 5 x 13 inches. It contains four sprues of board panels (about which, more in a moment), a sprue of bracing and dunnage boards, and excellent, detailed directions.

The back of the kit label shows in a nutshell how this material is assembled to make lumber stacks. (The direction sheet is much more detailed.) 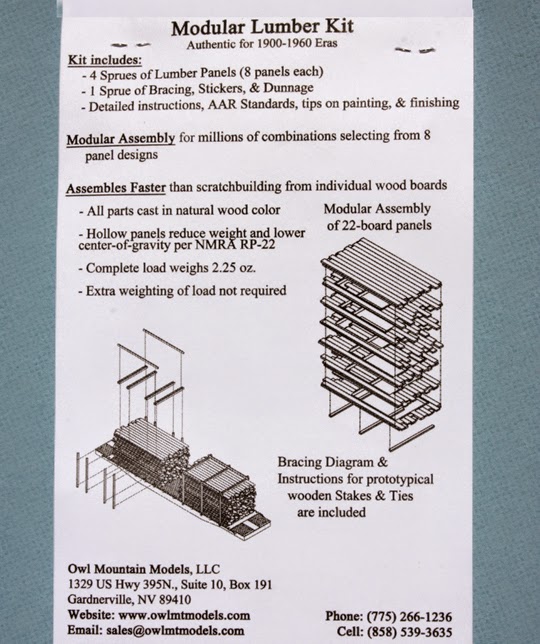 When you open the bag, you can see all the panels, eight to a sprue; each panel is eleven boards wide and two deep, making 22 boards per panel. If you were to stack all eight panels from one sprue together into one lumber stack, that’s 176 boards, which I leave to your imagination to consider doing one board at a time. Then multiply that by all four sprues (four stacks) to see what this kit really gives you.

The individual boards are dimensioned to represent 3 x 10-inch boards. And by the way, if you would like even more sprues to make bigger stacks, Owl Mountain has an add-on kit no. 3012 with more of them.
When you look at these panels, you immediately realize that this is, in a sense, an implementation in styrene of Paul Chandler’s lumber load method, which used individual panels of real wood. That method was written up in the Southern Pacific Historical & Technical Society magazine Trainline, issue 112 (Summer 2012 ), page 41. You can still buy that issue from the Society’s web site at http://www.sphtsstore.org/servlet/the-Trainline-back-issues/s/105/Categories .
To start on the Owl Mountain kit, I used a conventional sprue nipper to separate the panels. This is the only part of the job really requiring any clean-up, as the cutting scars can’t be avoided even with the sharpest of nippers (I found the corner of an X-acto chisel blade very helpful cleaning scars).
Once the panels were all cleaned up, I took the advice in the directions, and gently applied medium sandpaper to the tops and edges of all panels, so they wouldn’t have the shiny plastic surface. The directions also discuss weathering of the panels, though freshly cut and dried wood would not accumulate much weathering in its journey to market, nor even in the drying yard unless on the outside of a stack. I may weather some future stacks, but decided not to do more to the present panels than vary individual boards with Prismacolor artist’s pencils.
Assembly of the stacks goes quickly with any styrene cement. I often use Testors, or Plastruct’s Plastic Weld (more powerful), and found both worked well on this job. Remember that rather than one really tall stack, the loaders usually divided the load into two parts, with the same separator boards in the middle as underneath the load. The kit provides exactly this. Here is a pair of stacks, with separators. The slight color variation from the artist’s color pencils is visible.

You can see that I chose the option of making one end of the stack much more irregular than the other, something often seen in photographs of lumber on flat cars.
By the way, a full set of stacks, using all the panels in the four sprues, along with dunnage, weighs about 2.25 ounces, so you should not add weight to these loads.
The assembly continues with stakes, cross-ties, and longitudinal ties. One slick idea in the directions: on a flat car such as the SP F-70-7 or F-70-10, with deck notched at the stake pockets. setting the stakes a little low allows them to fit right into that notch (though oversize for the pocket itself), thus aligning the load. Here is a photo supplied by Owl Mountain, of a weathered load on a Class F-70-7 car:

I think this kit is a terrific addition to the modeler’s arsenal of ways to make loads, and several aspects of its design represent clever thinking. I will review it in my upcoming column in Trainline, so the SP Society membership can learn about it. I think the kit is a bargain at the price, and cannot recommend it highly enough.
Tony Thompson
Posted by Tony Thompson at 9:45 AM