In my first post about the new Owl Mountain lumber load kit, their no. 3001, I showed the process of assembly of simulated wood panels into lumber stacks, which are then joined to make the load units. You can read that post at: http://modelingthesp.blogspot.com/2014/08/open-car-loads-lumber-from-owl-mountain.html . And for more information about the kits themselves, additional photographs, and a direct purchase option, visit their web site at: http://www.owlmtmodels.com/lumber/3001.html .
In that previous post, I left off at the point of completing a stack of lumber, and showed a photograph provided by Owl Mountain, of a completed load. In this post, I show briefly the process of completing my own kit.
Once all the stack separators are glued onto the bottom of each stack, they can be glued together into a load unit. Then you have to decide how the load will be used in your operation. You can glue the load onto a suitable flat car, and with that approach, can glue the side stakes of the load so they line up with stake pockets. This is probably the most secure way of using these loads.
On my layout, nearly all loads are removable, and I thought I would see how well this Owl Mountain load works in that mode. I followed the suggestions in the kit directions to make the load that way. For the stake spacing on the load, I chose a to use the deck of a Southern Pacific Class F-70-7 flat car. This model was originally produced by Red Caboose, and is now produced from time to time by the Southern Pacific Historical & Technical Society.
I carefully aligned the load stacks in the desired position, then carefully began to glue each stake in succession onto the stacks, with their bottom end projecting into the notch in the car deck, above each stake pocket. This goes pretty quickly, as styrene cement softens the stake and allows it to “take hold” of the stack easily. In the photo below, I am adding the next stake to the near side, with the far side already staked. I trimmed a few of the stakes to a different length, as most photos of the prototype show stakes of varying length.

Once all stakes are attached, the cross-ties and longitudinal ties are added in the same manner, again with styrene cement making the job go quickly. Here is the finished product, now on a flat car with weathered sides and deck. (I have described my method for this weathering in a prior post, which is at this link: http://modelingthesp.blogspot.com/2011/05/weathering-flat-car-decks.html .)

The bracing here, photographed in sunlight, is a little translucent, despite an overspray of Dullcote. I will likely add another coat to reduce this, although in indoor lighting the effect is absent. By the way, the caution in the kit instructions about weight is well taken. In combination, the entire load weight of more than two ounces is very evident when it is picked up.
I mentioned above that I was concerned how well the loads would perform in removable mode, because the side stakes extend below the bottom of the load (so as to index into the stake pocket notches), and these could be vulnerable. I believe some careful storage technique would need to be devised for when the loads are off the flat car. But I’m happy with how I made mine. Here is one stack removed (and set down gently on its bottom stakes!). 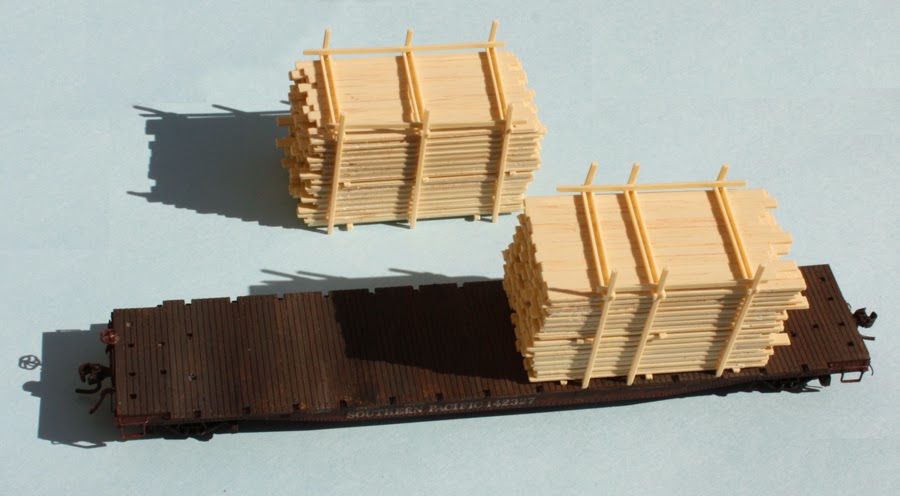 There has been some comment in on-line discussions that this is not a big lumber load. Since it is as tall as a 1937 AAR box car, I would disagree with that comment.

I will repeat my recommendation, that this is an excellent and well-thought-out kit, and produces a very good-looking lumber load. I like it, and strongly recommend it to anyone wanting a load like of this type.
Tony Thompson
Posted by Tony Thompson at 9:02 AM