The road behind the roundhouse

I described awhile back the construction of my roundhouse for Shumala, which is the Banta Models kit based on the Port Costa, California one, at: http://modelingthesp.blogspot.com/2014/02/a-roundhouse-for-shumala-part-5.html . Layout scenery around that area is still developing, and I realized I needed a way for roundhouse employees and train crews to reach the roundhouse and park their cars. This would likely be a dirt road in the 1950s, with a simple grade crossing over the main line, built from ties.
My plan was to install the tie-built grade crossing, then for the dirt road to simply align in width and height, with the ties lining the edge of track, so obviously the ties at the grade crossing had to be put in first. I have a fairly giant box of pre-stained Model Hobbies HO ties, so set about using a razor blade to split them the long way, parallel to the broad face, so they will sit below the rail head. That may not make a good grade crossing in the prototype, but for model purposes, where track gets cleaned from time to time, it is vital for rails to be “proud” of the grade crossing. And a low Kadee trip pin, of course, is really good at finding any high points between the rails.
There is also ballasting of the track in this area which needs to be done, but again, that awaits the grade crossings being installed first. Here is the area: 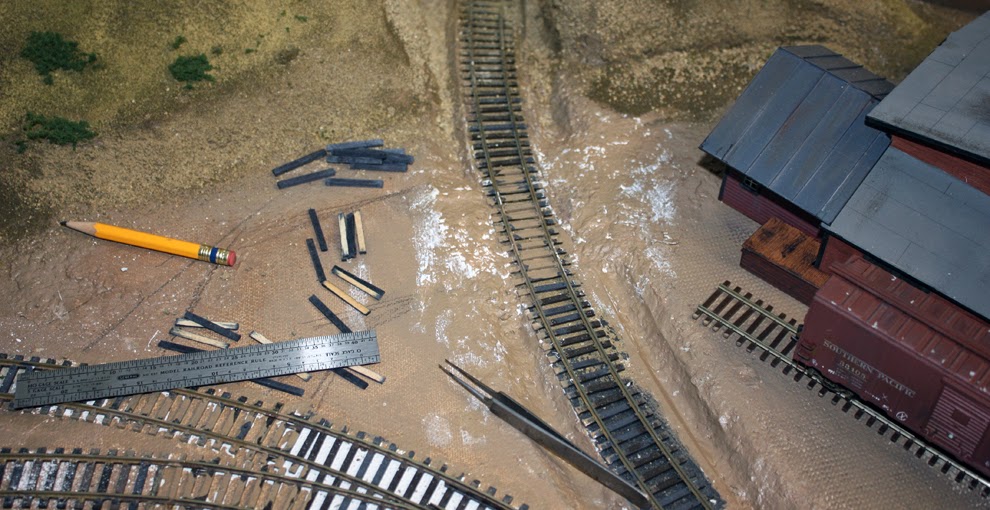 The roundhouse is at right. The whitish areas are where the painted Sculptamold has been sanded lightly to smooth it, but a final road surface has yet to be added. Piles of ties can be seen, many of them already split.
The next step is start gluing the split ties in position, for which I use canopy glue. (If you are not familiar with this useful, general-purpose adhesive, you can read my comments about the glue and its modeling uses at this link: http://modelingthesp.blogspot.com/2013/05/a-few-words-in-praise-of-canopy-glue.html .) I also check with the steel straightedge (visible above) to make sure all added ties lie below the height of the rail head. When partly done, this is what the area looked like: 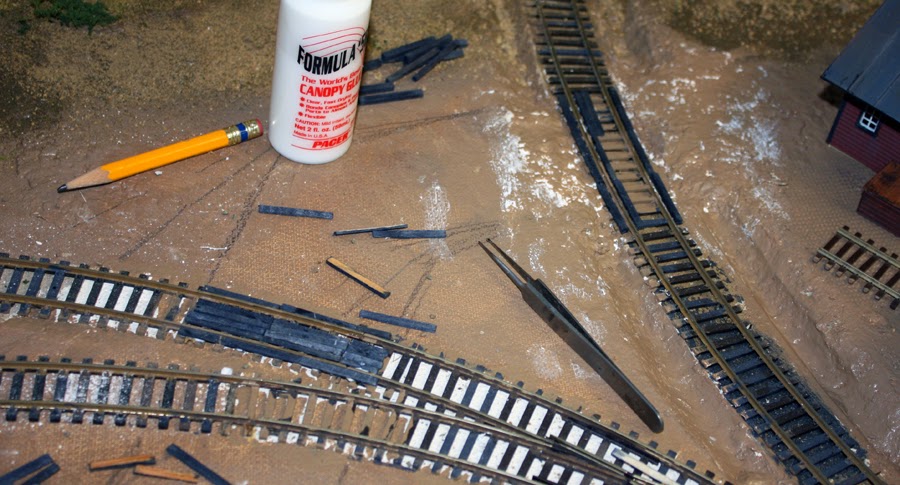 In this view you can see my bottle of canopy glue. The center crossing is complete, while the one at upper right on the main line is just partly done.
Some ties had to be cut in half for shorter length; others have to be cut in half the long way to fit between the rails. When all three crossings were complete, it looked like this. 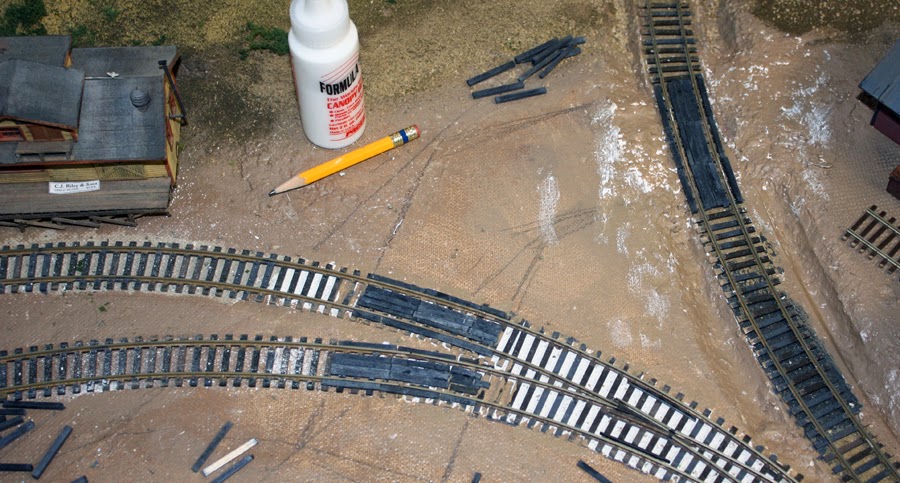 With some of the construction debris cleared away, you can see here the pencil lines defining the path of the road to the roundhouse (just visible at the upper right corner), though I probably won’t make a sharp angle as the pencil lines suggest, but a gentle curve.
With these grade crossings in place, I can proceed with the road surface; with ballasting the track visible in these views; and with ground cover and other scenic materials, now that I know where everything goes.
Tony Thompson
Posted by Tony Thompson at 12:57 PM