In the previous three parts, I introduced materials and the method used, and showed how the wet application of the acrylic wash led gradually to a dry car side. (Third one at: http://modelingthesp.blogspot/2014/09/my-acrylic-weathering-method-part-3.html .) Here I take up a few finishing touches which can be added.
Some highlighting or streaking can add to the effects of the overall wash in this method. As I have described the process so far, the pigment will have accumulated around rivets, corners, or protrusions of any kind, but if you have been careful as I described in previous posts, color will be pretty uniform. But photos of real cars often show more variation. Here are some ways to depict those variations.
First, some cars show either light or dark dirt near ladder rungs, presumably from the boots of yardmen or brakemen. In this photo, I have used some pure black to dash on a little such color on the lower part of the ladder (pure Burnt Umber works well too). Note again here that truck side frames have been weathered too.

In the photo above, I am just turning to the door area. Around door latches, there are often dirty streaks or patches, and if the door rollers or door track have been greased, there can be dark brown or black stains in those areas. In the photo below, I am adding those, again with a little straight Umber or black. 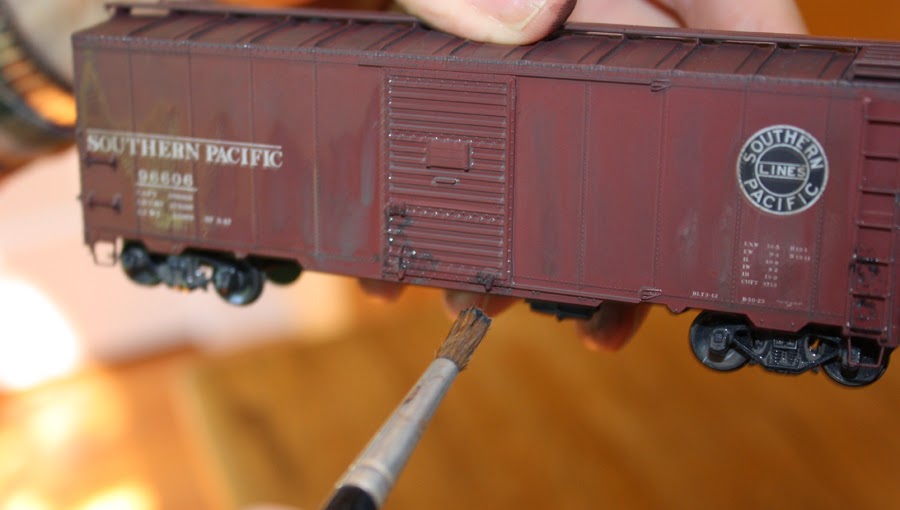 As dirty water drains from the roof in a rain shower, it is channeled along the top of the car side and drains preferentially from the ends of door tracks. This is an effect visible in some prototype photos. Dilute the straight pigment a little by adding water to the palette, or minimize the amount on the brush by just stroking it onto the newspaper under the work area, and then stroke downward at either or both ends of the top track, as you see here. 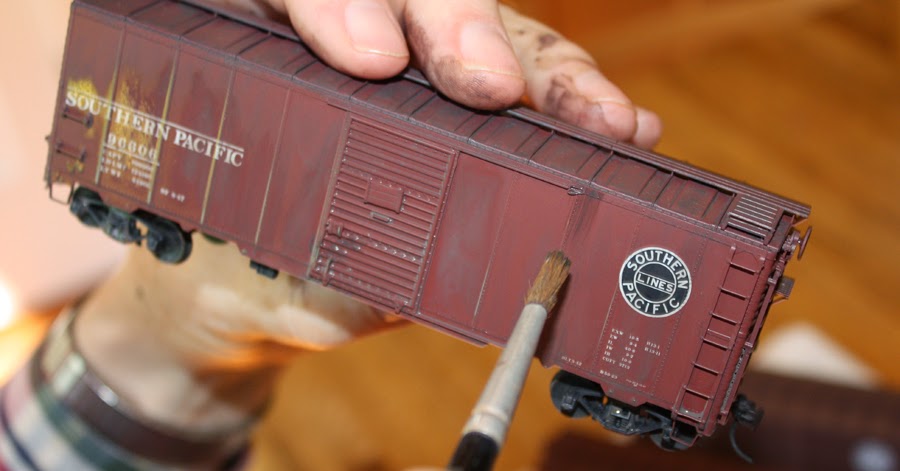 Note that my fingers atop the car have accumulated some paint. This comes off with water in seconds once you are done, so don’t worry about this development. Most fabrics, however, absorb the pigment, and thus are a different story, so I do try to keep from weathering my clothing.
One other point. Sometimes the effect turns out too mild for what you had intended. It is easy to go back and add more pigment after everything is dry (sometimes I add a protective overcoat of Dullcote first). Below is a reefer having a little more dirt added to the roof (the yellow “color” is actually reflected light). But always remember that although it’s easy to add more color, it’s a lot harder to “add less,” that is, to remove pigment, unless you do so fairly soon after application. Better to work up to the desired level of dirt from the lighter end of the scale.

Last, I like to allow all water to dry, even in crevices , behind ladders, or in other places water can hide, before adding the final Dullcote layer. That layer not only protects the acrylic pigments from scratching, but will also kill any shine, which sometimes can happen with this method. Where I live, sunshine is common all year round, and warming up in sunlight has proven a very effective drying technique.

Here you see the two cars for which I did roofs only in the session shown in the first post of this series, at right, and then at left, the two cars for which I did the car sides and ends in the second post (roofs had been done earlier).
These details complete the overall process of my acrylic weathering technique. There is more to say about car weathering for specific car types, which I will take up in future posts, but this covers my basic method of acrylic weathering and some key details.
Tony Thompson
Posted by Tony Thompson at 8:57 AM