In the previous post about this layout project, I showed the track changes, including cutting the existing pavement on Bromela Road to accommodate the new spur track to serve a Chevron bulk oil dealer. You can read that post at: http://modelingthesp.blogspot.com/2014/08/a-new-grade-crossing-in-ballard.html . In this post I describe the work to move forward with the project by adding the repaving.

One option in the repaving would be to match the color of the new paving to the old, but I decided it would be more interesting to show the new paving darker, to look like a paving repair.
My previous grade crossings on Bromela Road all used ties along the outside of the rail, a common application in the prototype to ease the transition from pavement to rail. Within the rails, I paved with rail edges, as shown at: http://modelingthesp.blogspot.com/2014/02/modeling-grade-crossings.html . These represent old rail used to contain the paving material, and I use a size smaller rail for this. The spur track here is Code 70, so the old rail will be Code 55.
So the first step is addition of ties along the outside of the rail, for which I used split Model Hobbies ties (which are pre-stained black). The vital point here is to keep the top of these ties below the rail head, to facilitate rail cleaning. I attached these with canopy glue. (If you are not familiar with this useful adhesive, you can see comments about the glue and its modeling uses at this link: http://modelingthesp.blogspot.com/2013/05/a-few-words-in-praise-of-canopy-glue.html .) Then I used the same glue to attach two lengths of Code 55 rail, cut to the length of the crossing, again to ensure that the tops of these pieces of rail are below the track rails. Here is the crossing at this point. 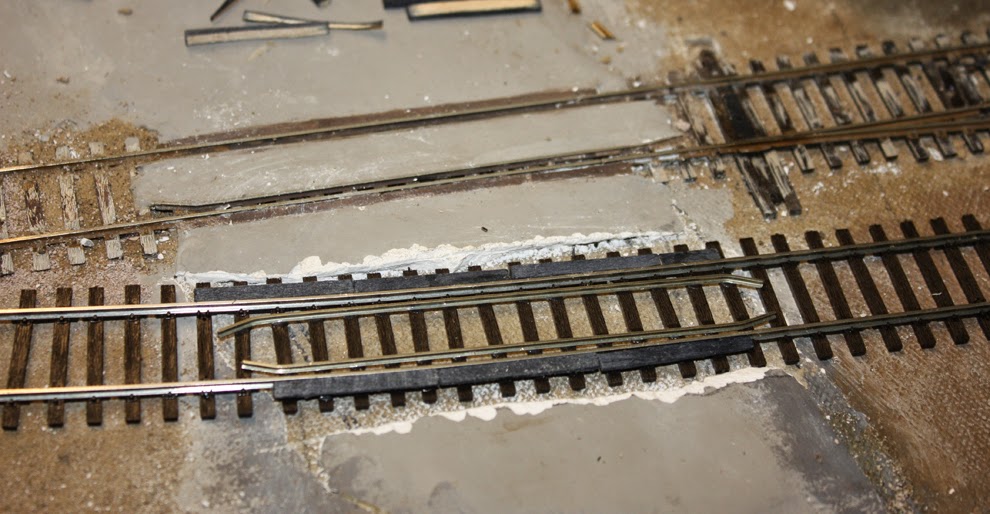 The rail has not yet been painted brown on the sides.
For roadway material, I like to use styrene sheet. I have done this in several places on my layout, and been happy with the result. In fact, in an earlier post (at: http://modelingthesp.blogspot.com/2014/02/modeling-grade-crossings.html ) the Chamisal Road crossing (the second photo in that post) is partly built with styrene. This is hardly a new idea; one written description of making a road this way is by Marty McGuirk in Model Railroader, May 1997, page 92. But I also had to match the existing roadway appearance of Bromela Road. I decided to just use the fine-grained paper mache that I normally prefer, Brandt’s Paper Mache Compound, a taxidermist’s mix. (It is, or has been, available from Robert Ruozzi of Irwin, PA.) Any difference in texture from the existing plaster roadway could be a result of the new paving being simulated.
Here is the first application of Brandt’s paper mache to the crossing area. (I think a second application probably won’t be needed.) When dry it will be sanded for greater smoothness, then the pavement color will be added. Note that rails have been painted.

Once the paved surface is painted, I will proceed to cosmetics: ballasting of track, ground cover and vegetation, etc., as I continue to complete this added Bromela grade crossing and its new spur track.
Tony Thompson
Posted by Tony Thompson at 8:46 AM