Where to start. Richard Hendrickson died from a heart attack on June 28. He was 83. He was one of my closest friends, in the hobby or elsewhere, and was so for more than 25 years. His loss is a real blow to me. But I want to collect here some thoughts and memories of him and his contributions.
Many model railroaders came to know Richard because he was unfailingly generous with his time and information, and loved sharing with anyone who was interested. He had an immense amount of information, so this sharing had an impact on many, many modelers. I am just one of them. There’s an old saying, “When anyone dies, a library of knowledge dies with them,” and of course that applies to Richard; and his library was bigger than most. But he was also someone who freely and happily shared his abundant knowledge whenever he could.
He published more than 400 magazine articles on model railroading, authored or co-authored four books about Santa Fe freight cars, along with the book, Billboard Refrigerator Cars, co-authored with Ed Kaminski. Below is the author photo he submitted for that book. He always advocated sharing information, and he had few peers in the extent to which he did so. 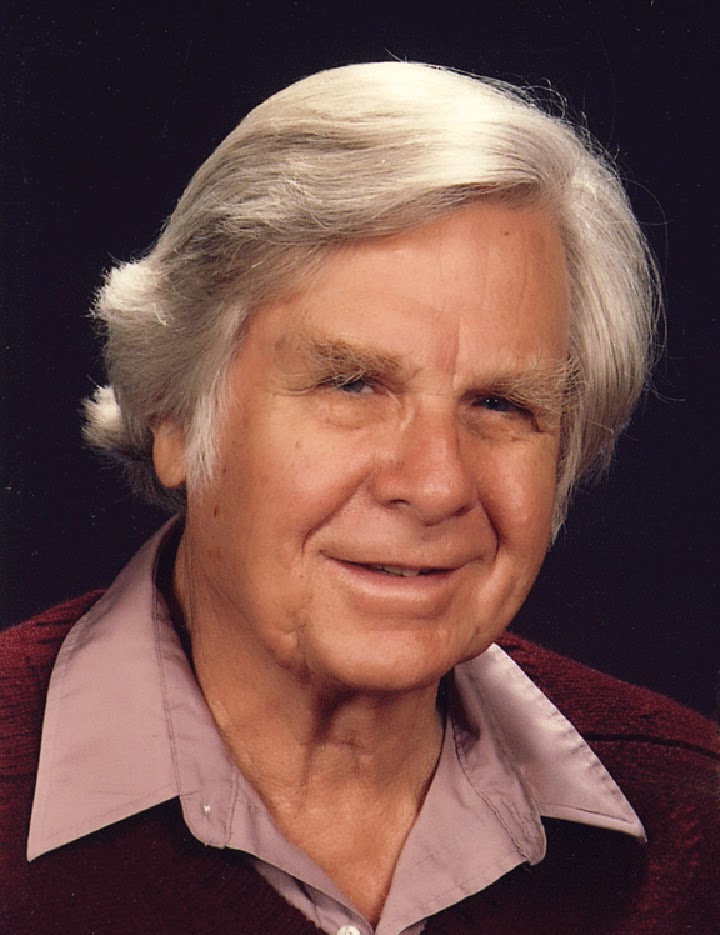 We first met by telephone, when I called him in the middle 1980s about one of his articles in the old Prototype Modeler magazine. We hit it off immediately on the phone, and the next time I had a consulting trip to California (I lived in Pittsburgh at the time), I visited him at his house, in Penn Grove. Getting together in person just increased our sense of having a great deal in common, and we were close ever since. He was a central part of the large get-together of freight car modelers I helped organize at the NMRA National Convention in Pittsburgh in 1990, and thereafter he and I conducted get-togethers of the highly informal “Friends of the Freight Car” modelers’ group.
Richard had led a remarkable life. In his youth, he raced sports cars, and held a competition license for a few years, so it was no surprise that he always drove peppy cars. He also worked as a racing mechanic in both the U.S. and Europe. He was an experienced backpacker, loved to ski, and rarely found a ski run that he couldn’t readily master; he could ski circles around most people on the hill, and continued to ski until recently. He raced small sailboats (especially International 14s) for a number of years, and loved to tell stories of those days, such as the exhilaration of completing the upwind course leg westward in San Francisco Bay to the Golden Gate Bridge, turning eastward and setting a spinnaker, and feeling the boat leap under you as it accelerated away downwind.
He earned a Ph.D. from the University of Connecticut in linguistics, and had a career as a professor of English, first at San Diego State University, and then at Sonoma State, from which he retired in 1995. After retirement, he and his wife Sandra built a new house in Ashland, Oregon, and moved there from Cotati, California. He soon discovered that his great enthusiasm for and knowledge of wines could flourish with Oregon and Washington wines, as it had in northern California. And few were his equal in enjoying a great meal with a fine wine.
He had always been interested in airplanes and knew a great deal about them, and as retirement approached in the 1990s, he arranged to take flying lessons. Then, after a few years renting airplanes, he bought a Citabria and loved to fly it. He and I made a number of memorable trips in that and other planes, including one to the Portola Railroad Museum. Soon after moving to Ashland, he obtained the rent of a hangar at the Ashland airport for the Citabria, and later was appointed to Ashland’s  Airport Commission.
Our real connection was model railroading, and he was an unfailing source of information. I never ceased to marvel at his memory for detail. I know the Southern Pacific and PFE well, and he was a Santa Fe modeler, but he knew the rolling stock of many railroads as well as I knew the SP or PFE. He had collected more than 30,000 photographs, primarily of freight cars, and it was most impressive to see all the three-ring binders of prints on his shelves.
Here is a photo of Richard in his office in Ashland, taken by John Signor in 2006. At lower left and behind him are a few of the photo binders. 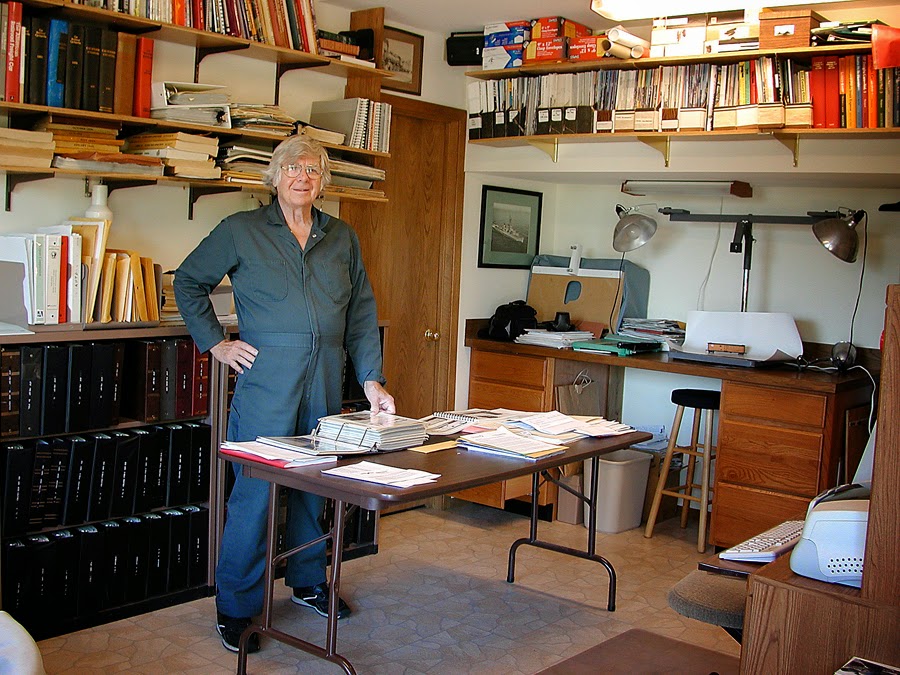 At right is his photo copy stand, with railroad books on the upper shelves all around the room. The black and white photo on the wall near the copy stand is the destroyer on which he served during the Korean War.
In the late 1980s he and Sandra started a company called WestRail, to offer essentially kitbashing projects based on Athearn “Blue Box” cars, such as replacing ends or doors, etc. For example, one of them made it possible to model a Santa Fe War Emergency box car, using superb resin castings of new sides from a master by Lloyd Keyser. As more and more accurate resin kits came along, together with accurate brass freight cars, WestRail became an anachronism, and none too soon for Richard and Sandra, who had already tired of the endless, finicky work of keeping all the detail parts in stock, and picking all the parts to fill kit boxes. But the company was a pioneer in showing the way to more accurate freight car modeling.
One of Richard’s favorite places on the planet was the La Mesa Model Railroad Club layout at Balboa Park in San Diego, modeling joint SP and Santa Fe operations on Tehachapi Pass. And one of his favorite jobs there was as an operator during one of the 1952-era operating sessions. Here he is on duty at Caliente, obviously happy in his work. As he often said, “This is the closest thing to a time machine that I will see in my lifetime.” 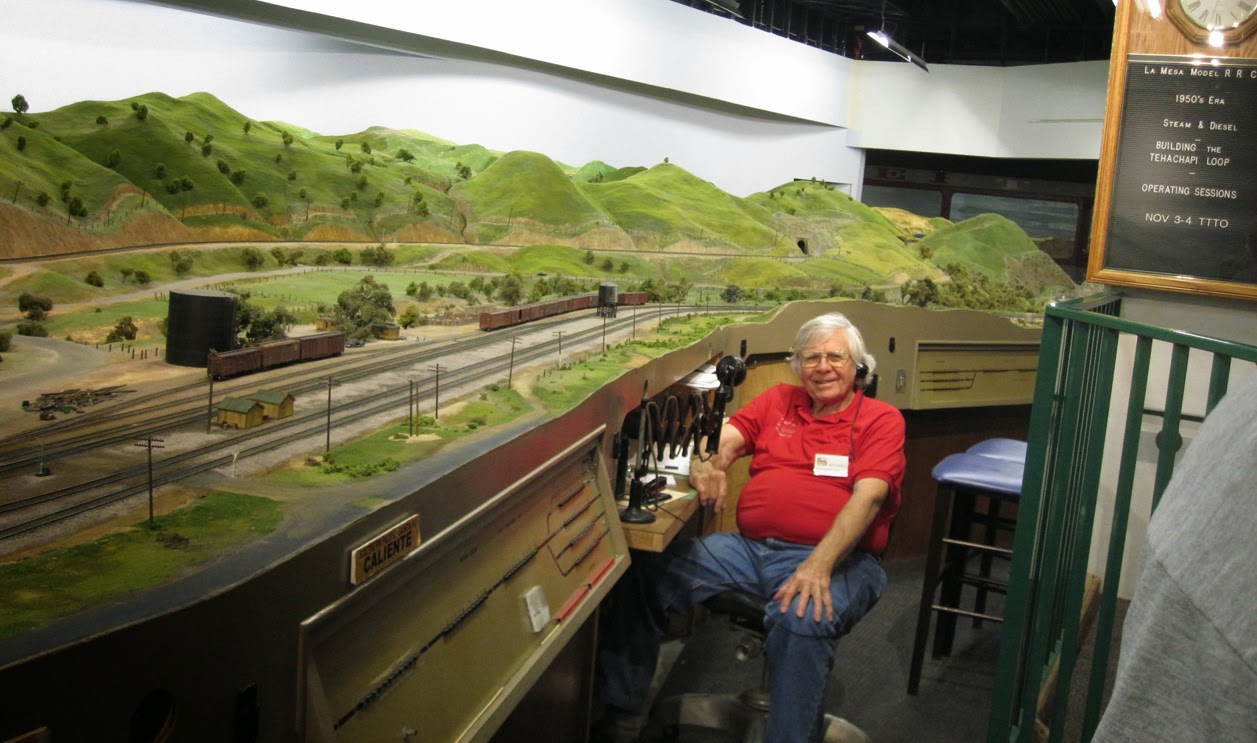 Another of his favorite places to operate was at Bill Darnaby’s layout in the Chicago area, annually visited when he and I would go the the RPM meet at Naperville. In the fall of 2013, this photo shows him at Bill’s East Yard, with Kadee’s Sam Clarke at right, handing him a throttle. 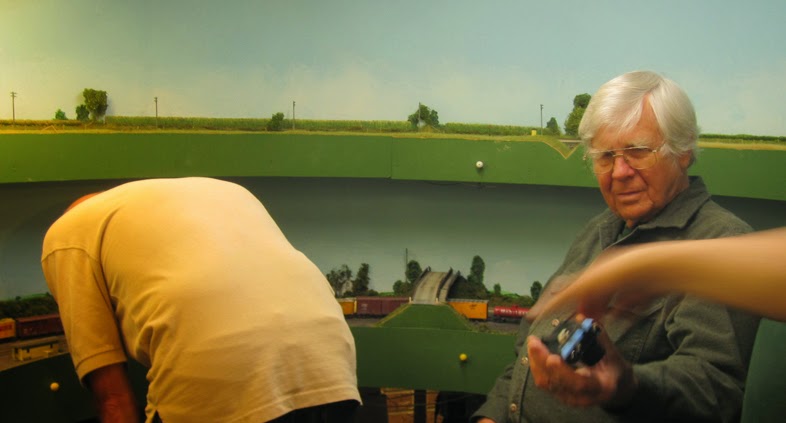 As a teenager, Richard not only grew up around steam locomotives, but had some memorable experiences actually operating Santa Fe steam in the Oceanside area. He retained quite a soft spot for steam, and often enjoyed seeing restored steam power running in various places. In August of 2013, he and I and our wives attended the Santa Fe Railway Historical & Modeling Society convention in Flagstaff, Arizona, and of course went on the convention’s excursion to the Grand Canyon behind this 2-8-2, a former Burlington locomotive. Here are the two of us by the engine, during a photo run-by, in a photo taken by my wife. 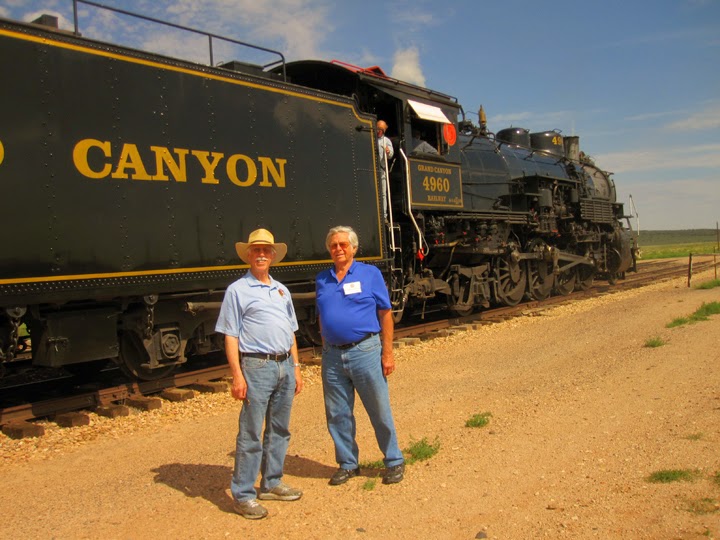 One more example of someplace Richard always looked forward to going, is the annual modelers’ meeting organized by Mike Brock in Cocoa Beach, Florida. One of our traditional activities there has been to go to an excellent Cuban restaurant called Roberto’s, and this photo, supplied by Dave Hussey, shows a dinner group there in 2012 (three of us wearing red “Friends of the Freight Car” shirts). 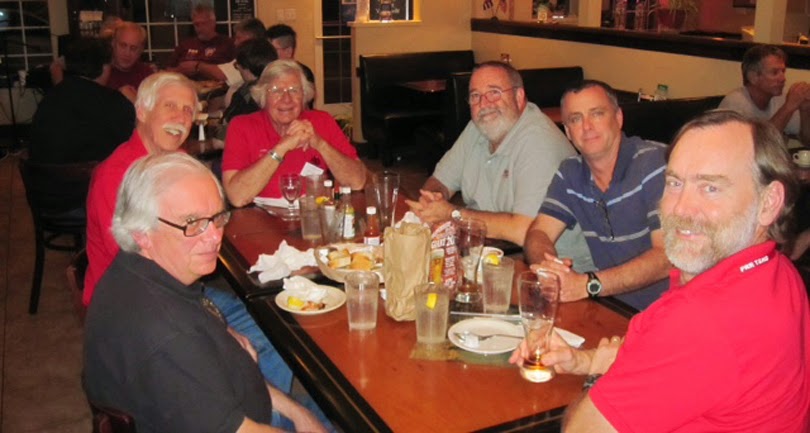 At near left is Larry Kline, then me, Richard, Dave Hussey, Lindsay Raley, and Bruce Smith at right. Larry, who passed away just this March, was another long-time modeling friend, so this photo does tend to choke me up a little.
From the first time I knew him, Richard consistently had one theme about modeling: the only way to get more accurate models to be manufactured, and for modelers to care about such models, is to get information out there about the prototype, by publication, presenting talks, or privately. Richard did that tirelessly and often urged me to do more of the same. Looking back, one can only think he was exactly right. Today there is far more good information available, and many more modelers are informed enough to try and model accordingly. We all owe him a great debt, but no one more than me.
Tony Thompson
Posted by Tony Thompson at 3:19 PM