Waybills, Part 33: more on the role of the agent

I continue to receive email and other comments about the waybill process, especially when I give one of my talks about the model layout use of waybills. I have presented earlier posts in this blog about waybill preparation, including the summary recently of an article by Dave Sprau (you can read that post at: http://modelingthesp.blogspot.com/2014/04/waybills-part-32-waybill-preparation.html ) and one back in 2013, quoting an eminently readable and detailed description of the process by Harry Dolan (which is at this link: http://modelingthesp.blogspot.com/2013/06/waybills-29-waybill-preparation.html ). But at least some readers (or talk listeners) seem not to grasp the point(s) even now. So I will add one more summary to the pile.
This one comes from Don Douglas, who worked many years for Southern Pacific. Part of his article in an issue of The Ferroequinologist (journal of the Central Coast Chapter of the National Railway Historical Society), issue 723 for May, 2012, was used as the Afterword in the book, Southern Pacific Standard Depots, by Henry Bender Jr. (Signature Press, Wilton, CA, 2013). Here is the part of that Afterword having to do with waybill handling.

“Felton, California [a one-man SP agency], located in the redwoods of the Santa Cruz Mountains, was a fun place to work. At 8:00 a.m., I would drive up to Olympia to make a check of the yard tracks at the sand quarry, then return to Felton to make a list of cars on the team track and storage tracks. Other duties including making demurrage reports and filling out various accounting reports. During mid-morning, Pacific Motor Trucking would deliver less-than-carload and Railway Express Agency shipments, and consignees would be notified.
“After lunch the local from Santa Cruz arrived and was provided a switch list of cars to be pulled and spotted at Olympia and Felton. Waybills would be typed up and delivered to the conductor on the local for his return to Santa Cruz and then Watsonville Junction.
“The agents at these one-man depots knew almost everyone in town and had a close relationship with the shippers and receivers of freight in their local communities.”

I think this makes as clear as can be, the responsibility for making out waybills when the loads are picked up, as well as the responsibility for providing the switch crew with the information they need to do their car spots and pickups. I went through a similar description in my post back in 2011, describing “The Role of the Agent” for model railroads (see it at: http://modelingthesp.blogspot.com/2011/10/operations-role-of-agent.html ). I think the image you ought to have in your mind for an agent on your layout is something like this (you can click to enlarge): 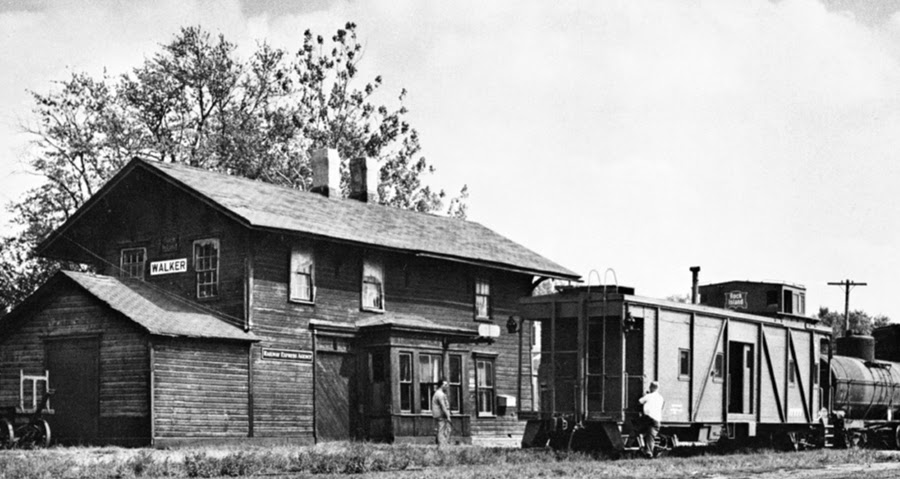 This is a Philip R. Hastings photo (used with permission from the California State Railroad Museum, where the Hastings collection is located), showing the local agent at left, and the conductor re-boarding his caboose after picking up waybills and car orders from the agent.
Waybill preparation and handling, along with the rest of the role of the agent, continues, I guess, to be poorly understood or even misunderstood by some modelers, judging from the questions I get after talks, or via email at other times. Hopefully this brief and clear account by Don Douglas will help.
Tony Thompson
Posted by Tony Thompson at 11:15 AM