In the previous post about the Shumala extension, I described the beginnings of a low ridge of hills that lies along one end of the extension (that post is at: http://modelingthesp.blogspot.com/2014/04/the-shumala-extension-part-6-basic.html ). These hills are partly to blend the transition from the backdrop onto the layout, but also to help conceal the backdrop hole though which the SP main line runs.
In that previous post, I concluded with a photo showing the added hill volume obtained with formed shapes of screen wire, covered with Woodland Scenics Plaster Cloth, which by the way is impressively convenient and effective for this job. Here is a repeat of that photo: 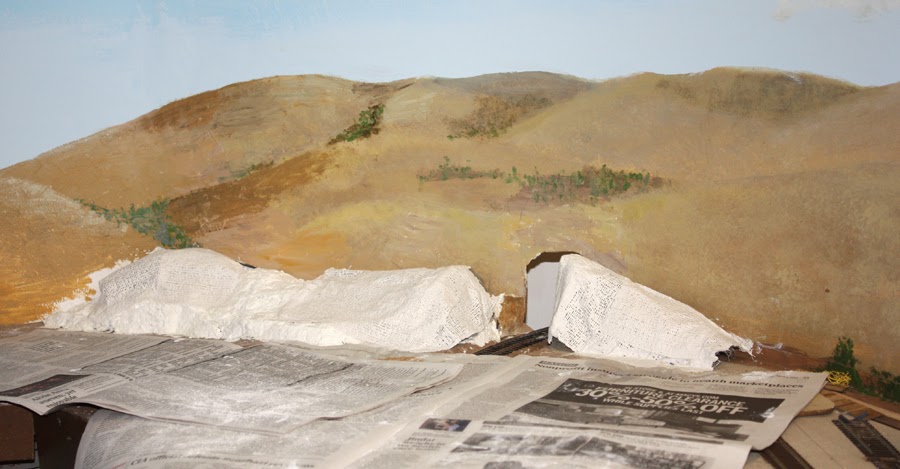 This contour was much better than what I had before, mostly in rising higher near the railroad cut, but still did not have convincing contours (to my eye), nor did it extend far enough to the left of the scene.
I added a few more chunks of styrofoam at the left end of the ridge, and blended the contour with more Sculptamold, while at the same time working to refine the contours around the cut, especially the left bank, which did not seem to rise enough to match the contour of the right bank of the cut. I will skip showing each iteration after each batch of Sculptamold, but here is how it looked when I thought it was approaching a satisfactory overall contour.

My next step was to smooth and refine the somewhat rough surface left by the Sculptamold, due to its coarser texture. For that refinement I use the taxidermist’s grade of fine paper mache, Brandt’s Paper Mache Compound. In addition to surface smoothing by the finer-textured Brandt’s, I also adjusted some of the contours and profile. Once that was done, I painted it all with Rust-Oleum “Nutmeg” brown, a water-cleanup paint which I have found in the past to have a good background color under scenic materials. Here is the painted hill:

You can just see the backdrop opening through the cut. But the Nutmeg color came out pretty dark, raising the question whether it was worth re-doing. I decided to repaint it, and mix it half and half with a color called “Almond.”
When I mixed the two colors, I found out why the Nutmeg had come out so dark—it had not been sufficiently mixed the first time. The pigments do take a lot of mixing for all of them to entirely emerge and contribute to the total color. But I went ahead with the half and half mix and re-did the hill. Comparing to the above photo, you can see that the color is now better. 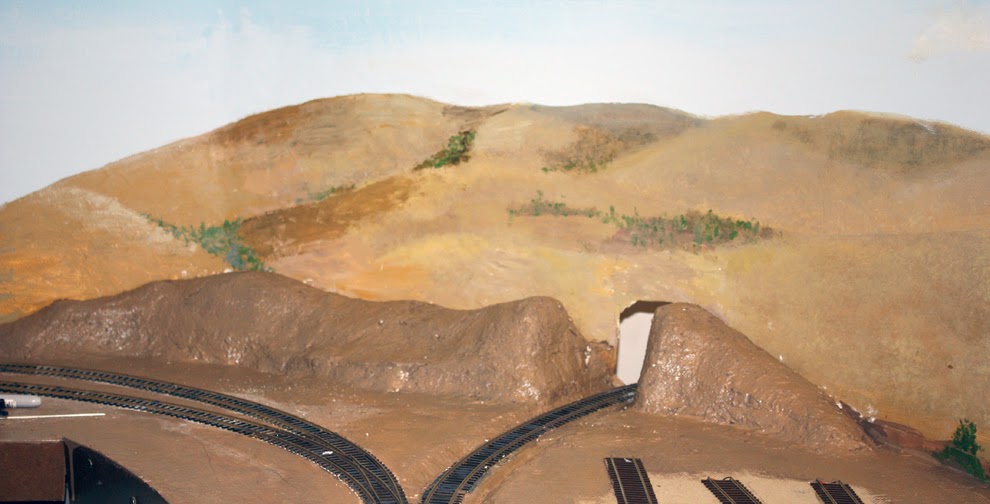 I mention all this not for any great intrinsic value of my repainting, but because to me it illustrates a vital principal, in scenery construction or in many other modeling tasks. If something doesn’t look right, don’t be exasperated and let it lie; change it. One little something “not quite right” can keep you from enjoying an entire project, or worse, can get you stalled on it, until you realize what has to be corrected.
Next I proceeded with my usual dirt and grass color applications, using Woodland Scenics turf materials. I described my approach in a prior post, which is at: http://modelingthesp.blogspot.com/2013/12/repairing-ballard-hill-part-5.html . That post also lists the various specific Woodland Scenics materials that I like to use for my Central California scenery.
As always, I used the Dave Frary approach, first applying a “base texture” with ground foam, followed by a “finish layer” to refine coloration, and to add shrubs and clumps of foliage. Using a folded piece of card, with scenic material in the folded “vee,” I gently blew real dirt onto the walls of the cut, freshly coated with matte medium.
With the roundhouse back in place, and the small warehouse in its location at left, this is how the refined hillside looked. The coloration of the various ground foam areas is, of course, chosen to blend with the backdrop painting colors.

The backdrop opening for the track is gray in this view. My final step (once foreground scenicking is done) will be to add a tree or two near the hillside at right. The purpose of the tree(s) near the cut is to obscure further the view of the hole in the backdrop, so placement will be done with that in mind.
Tony Thompson
Posted by Tony Thompson at 10:31 AM