I have posted several short comments about SP passenger cars (introduced at: http://modelingthesp.blogspot.com/2012/10/choosing-model-sp-passenger-cars.html ), with recent ones concentrating on head-end cars. But other passenger cars can also be important, especially one of my own favorite types, the sleeping car. On the Coast Route, SP ran two heavyweight night trains for many years, the Lark and the Coaster. The former was the premium service, while the latter was the economy train. The Lark, inaugurated in 1910, was from the beginning a deluxe, business-travel-oriented train. It became completely streamlined in March, 1941. The Coaster, a daytime train early in the 20th century, became an overnight train in 1926, and was so operated until its cancellation in October 1949.
This means that in my modeling year of 1953, there was no regularly scheduled Coast Route train using heavyweight sleepers. To operate them on my layout, then, would require one of three scenarios: first, that I declare a modest time warp, and operate the Coaster anyway; second, that I take advantage of many photos showing deadheaded heavyweight sleepers on the rear of the “Coast Mail,” likely moving to and from the Pullman shop at Richmond, California; or three, that a Special Train be operated, such as a convention or other group movement, which could have a wide range of consists. My preference is numbers two and three.
Those familiar with SP passenger train history will know there is one other scenario possible. The train which replaced the Coaster in 1949 was the Starlight, largely composed of streamlined Daylight articulated chair cars, plus a coffee shop and tavern, but with a few heavyweight sleepers on the rear end, and at least one baggage car, as late as 1954. This is a possibility if I should have enough Daylight equipment on hand.
Where does this kind of information come from? I have put a lot of miles on my  two volumes on Southern Pacific Passenger Trains, from Dennis Ryan and Joe Shine, especially Volume 1, “Night Trains of the Coast Route” (Four Ways West, La Mirada, 1986). Of especial value, train consists for various dates are included.
Back in the 1980s, when I started to put together some heavyweight sleepers, the best available model in HO scale was the Rivarossi (later AHM) car. It models a 12-1, that is, a 12-section, 1-drawing room car, by far the most common single floor plan in the Pullman fleet (about half of Pullman’s 9000 cars were 12-1 cars), and thus a good choice by Rivarossi. In those days, long before the SPH&TS had published its magisterial volumes on the SP passenger car fleet, one relied on one of Bob Wayner’s books, a reproduction of the Pullman Company List of Cars, 1950. Here you can look up car names (or numbers) and find out what kind of car it was, and to whom it was sold in the breakup of the Pullman fleet in 1948. 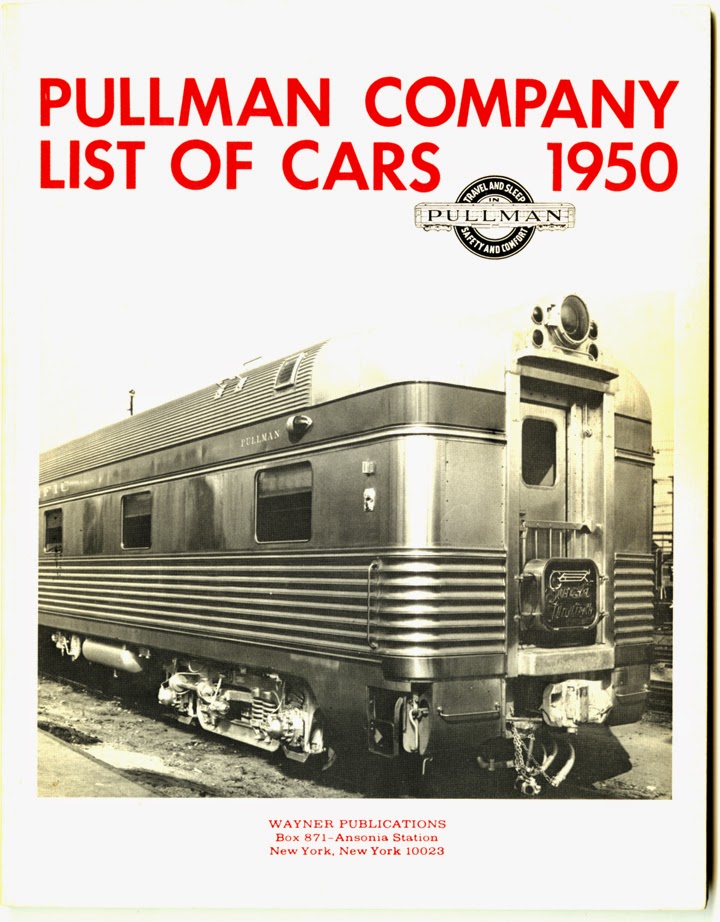 Using this book, I quickly found a couple of names of SP 12-1 cars I liked, and repainted and lettered a couple of Rivarossi model cars accordingly. The easiest modeling pathway is to ignore the fact that most of these car were air-conditioned by 1953 and just do a repaint, which is how I made the Tuolumne. (You can click on the image to enlarge.)

But as I say, in reality the great majority of these cars had air conditioning, meaning pretty darn visible rooftop ducts. (Air conditioning dates for SP cars are available in the SPH&TS series, Southern Pacific Passenger Cars, Volume 2 on sleeping cars.) I made these ducts the hard way, starting with wood shapes from Walthers, then working many, many layers of modeling putty to get the contours to blend smoothly. That makes my model of Inyo a bit more realistic than Tuolumne. This model shows the common arrangement, in which ducts did not extend over restrooms or aisleways.

Next I wanted to do one of these cars in Two-Tone Gray, though in 1953 that was not yet a standard scheme for pool cars. It was certainly in use on relief cars for particular trains, which is how I chose to regard Serra (at that time having no source of information of the dates of paint schemes on individual cars; see the SPH&TS series). The only modeling complication is that white lettering is needed.

My last 12-1 model was to capture the fact that sometimes cars from the Northwest railroads with which SP connected in Portland, NP and GN, traveled beyond their normal southward limit, the Bay Area, and reached Los Angeles. They would then return northward. I chose to model a GN Pullman with the name Columbia Glacier.

This is not an actual Pullman name, but is similar to the names of a number of Great Northern Pullmans, for example Harrison Glacier, Grinnell Glacier, Blackfoot Glacier, and Sexton Glacier. (Those cars were a series of duplex-bedroom cars.) The Pullman Company did have a “Columbia” series of 10-section observation cars, but not a Columbia Glacier in that series. Given that there is a real Columbia Glacier in the North Cascades of Washington State, and it is part of the headwaters of the Skykomish River there, it seemed like a good choice of name for a GN car.
But I really wanted to go farther than the 12-1. Yes, the SP owned and operated a fair number of 12-1 sleepers, but SP really seems to have preferred other types, usually cars with more room accommodations, such as the 10-1-2 (10 sections, 1 drawing room, 2 compartments), the second-most numerous floor plan after 12-1, and I wanted to see if I could model some of them, too. That will be the subject of the following post.
Tony Thompson
Posted by Tony Thompson at 10:05 AM