In a few prior posts, you might see the depot in my town of Ballard. This is a scratchbuilt structure (more on that in a moment), which I based on the look of Southern Pacific depots, though it was intended for my freelanced short line, the Lompoc & Cuyama. The L&C occupied the trackage of what is now an SP branch line. For more on the old layout, including a track plan, see this post: http://modelingthesp.blogspot.com/2012/03/survival-from-my-old-layout.html .
I set about designing the structure as a one-story depot (usual SP practice in towns where agents could rent accommodations, thus no need for living quarters to be included in the depot). There were a number of different one-story standard designs, as shown in the book Southern Pacific Standard Depots, by Henry Bender Jr., Signature Press, 2013. But when I was building my model, 25 or so years ago, I didn’t have a resource such as Henry’s book, but had to browse through photos. I now recognize that I used features of Depot No. 18, with a rectangular bay on the street side as well as a bay at track side, and otherwise followed typical SP depot floor plans.
Construction of the depot used wood clapboard sheet, some Campbell windows, and a variety of Grandt Line windows and doors, not necessarily the same as the corresponding SP-style components since an accurate SP depot was not intended. Walls were well braced with 1/4-inch square balsa and heavy basswood strips, as you can see here. In the foreground is the street side of the depot.

My roof was made removable, something I usually do, to facilitate later changes such as lighting or interior detail, if desired. I used heavy styrene sheet for the roof, both for strength and to avoid warping. The interior of it was braced with 1/4-inch square styrene tubing, and you can see the formers at center and each end to maintain the correct roof angle.

My L&C paint scheme for structures was a pale brown body, with medium brown trim. The roof (Campbell shingles) was left natural, though weathered. You can see that paint scheme in photos from the old layout, for example at: http://modelingthesp.blogspot.com/2011/01/layout-design-ballard.html .
In more recent times, as the transition grew more complete from the Lompoc & Cuyama to the SP branch, I painted the roof of this depot the SP roof color, Moss Green, using Tru-Color Paint’s item TCP-164. You can see an overhead view of the depot at this point in another of my earlier posts (here: http://modelingthesp.blogspot.com/2013/09/building-guadalupe-fruit-company.html ).
Here is the track side of the depot with its green roof (I am not happy with the coverage of this repaint, and will airbrush it again). This side is not as refined in detail, because it faces away from the aisle in my layout room and is thus difficult to see. The angled bay on this side would be unusual in SP practice.

One touch I added was to put the town name on a roof sign. In the original layout location, this helped with visibility. This next photo shows the way it was supported.

Placing the town name on the roof of a depot is rather untypical of SP practice. But there are examples out there. Here are two. The first is the old Roseville depot (torn down about 1973), in a 1969 photo by Rick Kang. 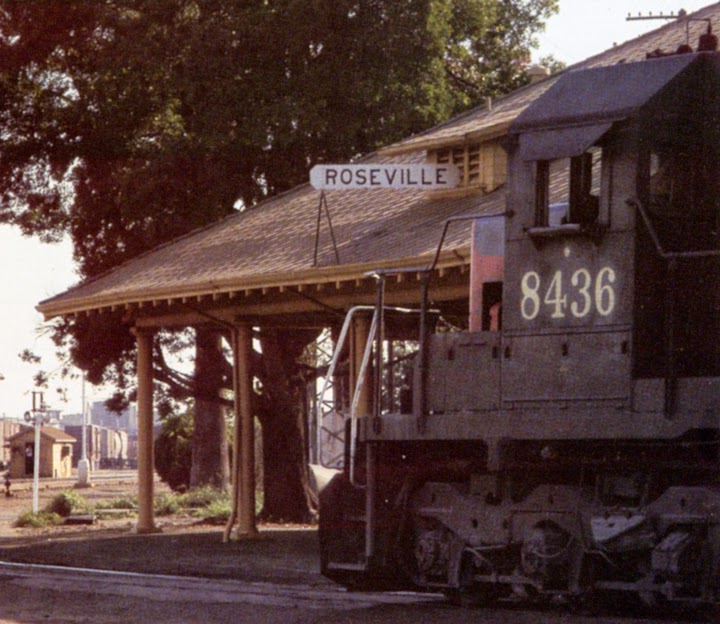 A second example is Truckee, photographed in 1958 by Fred Smith. Both these photos are from Tom Dill’s book, Southern Pacific’s Historic Overland Route (Four Ways West, La Mirada, CA, 1999); you can click to enlarge.

Among other depots with such signs was Colfax. Those examples are the basis for my adding roof signs to my depot.
To make my Ballard depot really have an SP family resemblance requires repainting of the building. I will have to remove the window glazing (and shades) so that I can paint all sash and mullions white, and then the body (non-trim areas) will have to be painted Colonial Yellow. Those are upcoming tasks.
Tony Thompson
Posted by Tony Thompson at 9:42 AM