One car type often seen in the Southern Pacific’s transition-era “Coast Mail,” trains 71 and 72, is a postal storage car. This was a car with nothing inside but vertical stanchions, floor to ceiling, to which mail bags could be tied. Sometimes it was a working car, adjacent to the RPO (Railway Post Office car), sometimes it was a sealed car of through mail (mail in closed pouches which did not require sorting or handling by postal clerks en route). These cars could be converted from a variety of other car types, but on the SP, it was often a former RPO, with the interior “postal apartment” removed and with the mail collector arm, the exterior signature of such a car, removed.
There is considerably more information about the mail handling in this kind of car, in two books published by the Southern Pacific Historical & Technical Society. One is a chapter entitled “Traffic,” in The Ghost Trains of SP’s Overland Route (Mail Trains 21-22), by Randall E. Cape and Robert G. McKeen (Pasadena, 2006); the other is the Introduction to Volume 3 of the series, Southern Pacific Passenger Cars, “Head-End Equipment” (Pasadena, 2007). The latter book even has floor plans of mail-storage cars on pages 45, 48, and 51.
To model a mail storage car, one approach is to use any available SP RPO model, remove the mail catcher arm, and reletter. Those are the most visible signs of the conversion from the outside. But I wanted something a little more distinctive, such as a clerestory car. A photo I obtained from my friend Clark Bauer years ago was an image stubbornly embedded in my memory, and I decided to see if I could model the car in that photo. Here is the photo, taken at Council Bluffs in 1954.

By referring to Volume 3, cited above, I learned that this was a 60-foot RPO car built in 1911, which came over to SP from the El Paso & Southwestern in 1924 (see page 392), and was immediately remodeled by SP to have bigger side doors and fewer side windows, for postal storage service. The original number, EP&SW 252, became SP 4263. There was even an interior photo of the car after conversion (from the Steve Peery collection), which shows the stanchions. 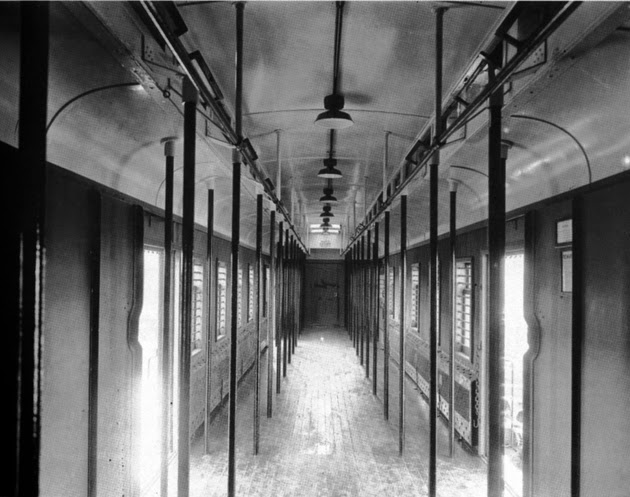 Having once figured out how to kitbash an Athearn baggage car (see: http://modelingthesp.blogspot.com/2014/06/my-baggage-car-article-in-prototype.html ) by slicing and reassembling it, the straightforward method of making this model (for me) was to start with an Athearn full RPO, and cut it down to 60 feet. To illustrate what is meant, here is an image of the Athearn clerestory RPO body from their website, with the cuts marked for my conversion. (You can click on the image to enlarge it.)

Cut number 1, at far left, removes the car end you need to keep. Cut 2, next from the left, removes the excess length you don’t need; in other words, you discard the piece between Cuts 1 and 2 (this is where you can choose the exact length of the final car). Cut 3 gives you the door edge, and Cut 4 removes the excess door width. The goal here was to create two equal-width doors, and end sections outboard of the doors which were of equal length. The SP car does not have equal-length outboard ends so this may not have been a good choice for modeling SP 4263. If you wish to remedy it, move Cut 2 to the left, about five scale feet.
Here are three of the cuts made, yielding three car sections: first, the car end at left, already glued to the segment between Cuts 2 and 3; second, placed above the car, is the discarded piece between Cuts 1 and 2; and third, at right, the remainder of the car. Cut 4 remains to be made.

Next, I made Cut 4, the cut surfaces were filed smooth, and the final car parts all were glued together (for joints like this, I like to use a styrene cement like Plastruct’s Plastic Weld, because it really softens the plastic and permits the joint to be pressed strongly together and eliminate any minor roughness in the cuts). I then used Squadron Green putty to fill any gaps and to ensure a smooth outer surface. I also added splice plates inside, of 0.015-inch styrene sheet, to reinforce joints. That completes the basic body shell.
I now added 0.012-inch brass wire handrails alongside doors and at each car corner, first shaving off the molded-on Athearn ones. I also added the Athearn brake wheel at the B end. Many SP head-end cars had lever hand brakes, but this one had a wheel (see photo at top). Finally, I have found over the years that a coat of gray primer serves well as a “witness coat” to make it easy to find defects which need more work. Here is the completed body in primer.

With the primer coat applied, I can turn to the kitbash of the underbody length, which is a whole new problem, and complete a few other details. I will return to those topics, along with lettering, in a future post, Part 7B.
Let me hasten to say that this conversion will not yield an exact model. There should be a side window at the B end, and the center-section windows should be equally spaced, as well as set higher on the car side. The doors are almost right, having the correct 4 foot, 10 inch width, though they have three instead of four window panes. But the model certainly captures the general look of this car, which was my goal in the first place.
Tony Thompson
Posted by Tony Thompson at 10:07 AM