In my previous post on this topic, introducing the modeling of heavyweight sleepers (see: http://modelingthesp.blogspot.com/2014/07/modeling-sp-passenger-cars-heavyweight.html ), I talked about using the Rivarossi 12-1 model, with only some added detail and interior, for several cars of interest. At the end of that post, I mentioned that I wanted to go beyond the 12-1 (which means 12 sections, 1 compartment), and that is the subject of this post.
But first, I have received some mail, essentially asking, “who or what was Rivarossi,” and the answer is that it was an Italian company, founded in 1945 by two men named, you guessed it, Rossi and Riva. For years their products were imported to the U.S. by AHM (Associated Hobby Manufacturers). In the 1990s, Rivarossi acquired a number of other European model railroad manufacturers such as Lima and Jouef, then in turn entered bankruptcy in 2004, and were acquired by England’s Hornby. The 12-1 Pullman is not in current production, but is readily found at swap meets and on eBay.
Returning to modeling of SP sleeping cars, my entire perception of this topic was formed when I read the phenomenal series of articles in Mainline Modeler magazine in 1981, by the late Thomas C. Hoff. There were five articles in the series, running in the January/February, March/April, May/June, July/August, and September/October issues in 1981, and Robert J. Zenk contributed to Part 4 and was sole author of Part 5 about underbody detailing. But Mr. Hoff’s conversion method was the core of the series.
His basic idea was founded in the fact that Pullman heavyweights were built as a basic car body of fixed length and width, and within it were built various “modules” to serve a variety of sleeping car needs. The only really visible external sign of these internal variations was the window arrangement. So Hoff realized that if you rearranged windows of a model, without otherwise modifying the car body, you could achieve a whole range of sleeping cars. The obvious starting point? the Rivarossi 12-1.
Here is a page spread from Part 2 of the series, showing some of the process of doing this job. 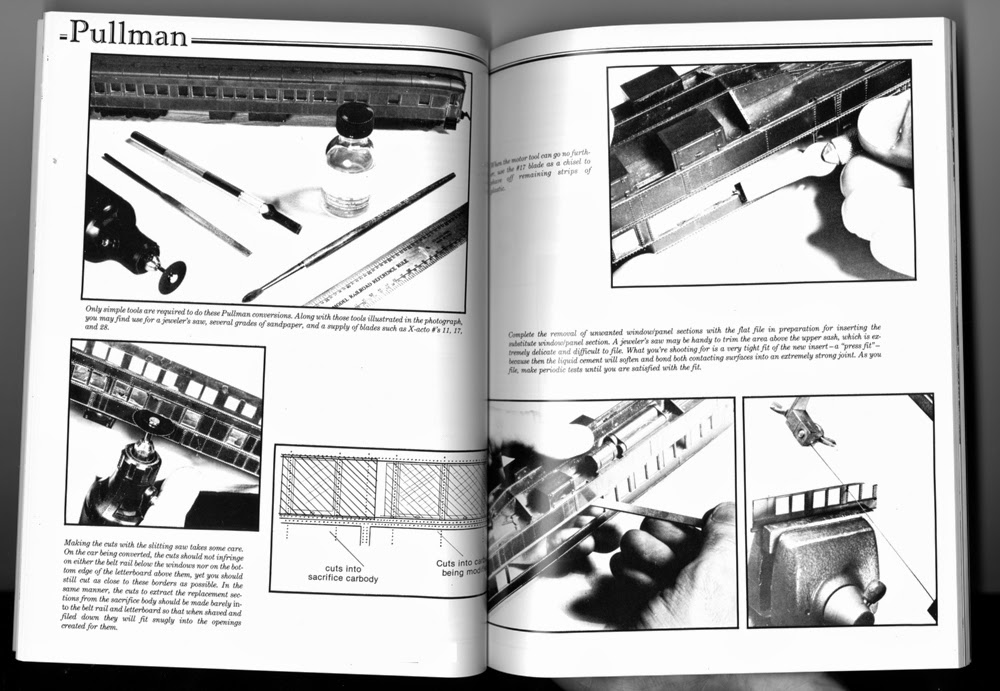 You can see, left page, lower left photo, cutting out the window or windows from a sacrifice body, then cutting out a destination for those windows in the “good” body, right page, top, and filing the opening to fit, right page, bottom left. My own work removing windows just used an X-acto knife instead of the slitting saw. This is all pretty easy because the Rivarossi car body plastic is rather soft, and the real challenge is to avoid removing too much material.
Here is one more photo from the article, to show inserting a window section into the “good” body (with care, it is easy to ensure a snug fit), after which the joint is flooded with styrene cement: 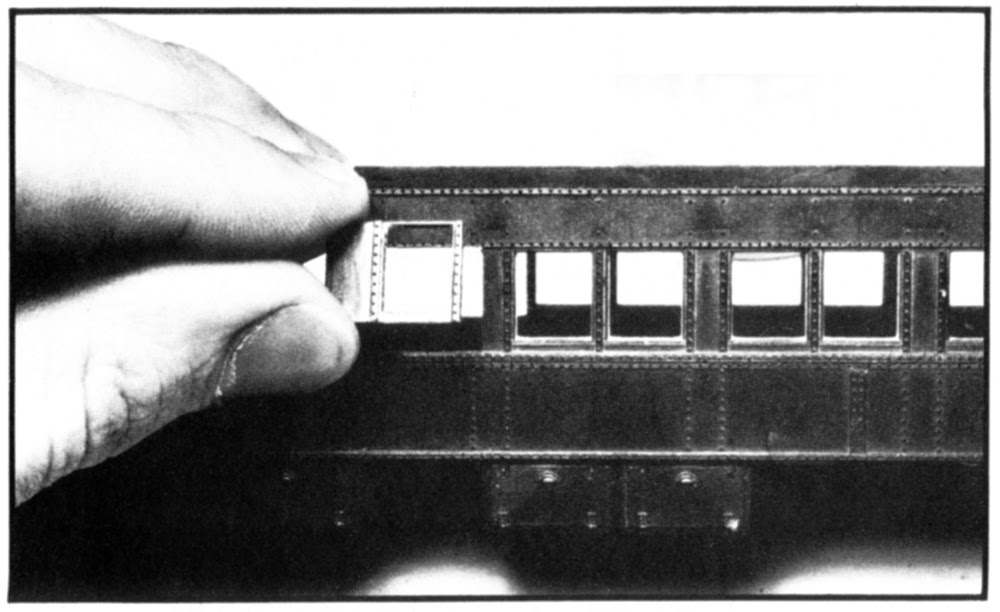 Turns out a single sacrifice body can provide windows and panel material for a bunch of conversions.  Here is one side of my sacrifice body after almost all the window sections had been removed for conversions:

This particular car body was fortuitously convenient, because the window section was a pale cream color, making the removed parts easy to see on a new body.
Here is a conversion to a 10-1-1 car in progress (that is, 10 sections, 1 drawing room, 1 compartment), showing both sides. You can click to enlarge.

On the second side (lower photo), it is a window pair that has been inserted, but the far side of the car is visible through the left-hand window of the pair, making it look like a solid panel and not a window. These changes simply follow Hoff’s description in his article. Incidentally, the entire Hoff series was reprinted in the “Best of Mainline Modeler” book, Passenger Cars, Volume 1 (Phoenix Publishing 1991), in case you cannot find the magazine issues.
It won’t fit into this post, but I will show in a future post the additional steps I took for completion of that car body you see above.
I should mention at this point that New England Rail Service now sells separate windows of all the Pullman sizes and styles, so you no longer need a sacrifice body. They also sell a well-designed air conditioning duct that can be cut to the desired length for the car being modeled. For descriptions of all their parts, and photographs of many of them, you may visit their site at: http://www.newenglandrail.net/products.htm ; all are designed to work with the Rivarossi body. The NERS parts are also sold through Walthers and thus can be ordered direct, or through your local hobby shop, as you prefer.
The original Rivarossi cars came with undersize wheels in their trucks, about 29 or 30 scale inches in diameter, and had oversize flanges. A standard 33-inch freight wheelset will fit fine and operate better. Passenger cars typically had 36-inch wheels, but wheelsets this size don’t fit well in the Rivarossi sideframes, and also create a coupler height problem. I have usually used Kadee 33-inch wheelsets in my cars.
To conclude, I show one of the cars I completed using the Hoff method, an 8-1-2 from the Pullman list, name chosen as Rock Pass (8-1-2 means 8 sections, 1 drawing room, 2 compartments). This model has a number of relocated or replaced windows, and has had air-conditioning ducts added. Although the prototype Rock Pass actually had been assigned to SP service once it was air conditioned in the 1930s, it returned to the Pullman pool in 1942. I chose to depict the car as still carrying the Pullman name, as though it remained in pool service, though there is one indication it was sold to the Wabash some time after 1948.

You can count the four paired window sets, just left of car center, where the four sections are located. Incidentally, the Rivarossi interior molding has also been kitbashed to suit the revised interior arrangement.
In a future post or two, I will say a few more things about modeling SP heavyweight Pullmans and other sleepers.
Tony Thompson
Posted by Tony Thompson at 10:48 AM