I have used several flats on my layout, both as photo backdrops and for industries being planned. I wrote a post about preparing for use the fine building flats sold by KingMill Enterprises; you can read that prior post at: http://modelingthesp.blogspot.com/2012/08/background-flats.html . I also wrote a second post on that topic, to show how I kind of “kitbashed” one of the KingMill flats to reduce the building height to better suit my layout (see: http://modelingthesp.blogspot.com/2013/02/background-flats-2-kitbashing.html ).
In this post, I want to illustrate making a building flat by taking photos of a prototype building. The structure is a poured concrete building, on 98th Avenue near the Oakland Airport, which was built shortly after World War II. For many years, it has housed a company called “California Airframe Parts,” a company which collects and warehouses old (not to say “ancient” in some cases) airplane parts of all kinds, which of course are in demand for maintenance of older airplanes and for various kinds of restorations. It remains a thriving company today. There are Flickr photos of their old parts at: https://www.flickr.com/photos/lostamerica/sets/72057594100613805/detail/ .
I decided I could include this warehouse on my layout, and accordingly took a number of photos of the building. Lighting that day wasn’t too great (the public side of the structure is north-facing), and in some photos you can see my hand trying to shade the lens. Still, I persisted in taking a series of images, because I really liked the hand-painted look of the building sign. 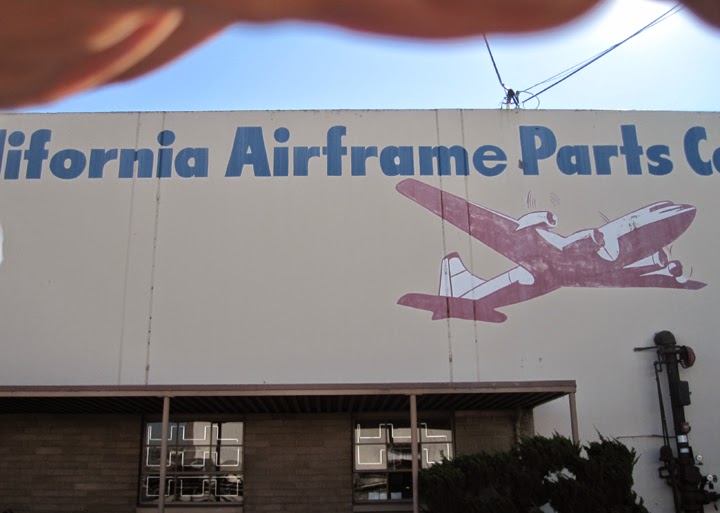 I did manage to get a full set of images of the front of the structure. I pieced them together in Adobe Photoshop, and where the images had some “keystoning” (natural for ground-level shots where you can’t back up much), I could use the tools in Photoshop (Edit > Transform > Distort) to correct each image to a rectangle. I cropped off any sky or background visible past the sides of the building, and arrived at this.

Now I could print the image on glossy cardstock. For this step, I go to my local copy shop, which has a high-resolution color printer, so the print is pretty inexpensive. In the photo, the foreground office structure, attached to the warehouse behind it, could remain on the final flat (its windows look all right), but my plan is that it will be partly obscured on the layout by a “shipping and receiving” building for California Airframe Parts.
Next I used rubber cement to attach the cut-out print to some foam core backing, both to stiffen and support the flat. Rubber cement has the advantage that it won’t affect dyes in the color print. I use it in the “contact cement” mode, as I described in a previous post about assembling building flats (see: http://modelingthesp.blogspot.com/2012/08/background-flats.html ), though with rubber cement, it isn’t really a “contact” adhesive; you can lift and reposition the glued-down object a couple of times and still get good adhesion, one of the great features of rubber cement as an adhesive.
The ultimate location of this flat is along the backdrop in my town of Ballard, but here it is with a freight car (a Broadway Limited model), just to show it as a model building. 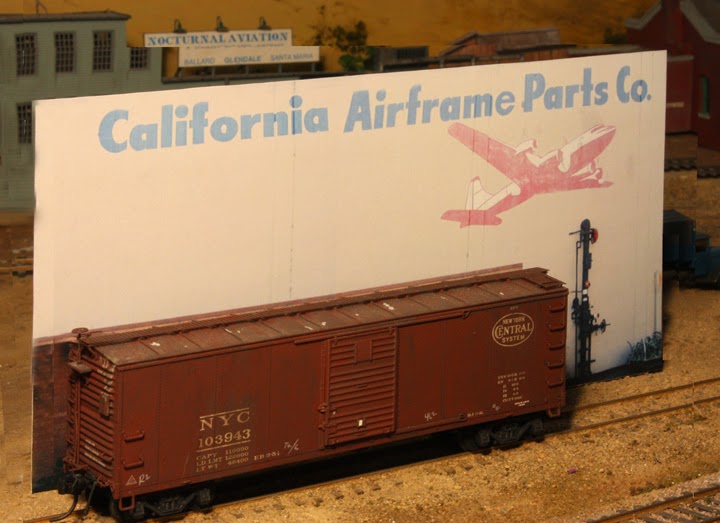 Many people have used this technique, of using prototype structure photos in layouts, so there is nothing original at all about the idea. What I am emphasizing here is using a group of photos assembled into a composite, and then making a flat, rather than pasting the photo to the backdrop.
Tony Thompson
Posted by Tony Thompson at 11:52 AM