The earlier posts on this topic can be found by using the search box at upper right; the earliest three were linked from Part 4, which can be found at: http://modelingthesp.blogspot.com/2014/06/modeling-sp-passenger-cars-part-4.html .

In my second post of the series, I mentioned the fine kits for SP head-end cars from Southern Car & Foundry. I have had two of them on my workbench, kit 1002 for a 70-foot baggage with windows, and kit 1003 for a 60-foot baggage. I had Dennis Williams build one of each, and paint them for me.

Nearly all my head-end cars are painted in the standard Dark Olive Green scheme. This was discontinued as standard in 1954, but since I model 1953, it is necessarily my standard scheme. A few SP heavyweight head-end cars were painted in other schemes, such as Daylight or Union Pacific Yellow, for relief service in the relevant trains, including a few in Two-Tone Gray. But before 1954, the Two-Tone Gray was not generally used for cars in pool service. For more on this, refer to the SPH&TS book, SP Painting and Lettering Guide (for passenger equipment), and to Volume 3 on head-end cars, in the series Southern Pacific Passenger Cars (SPH&TS).
In my third post in this series, I mentioned what was then my choice for painting Dark Olive Green, the Star brand color STR-29 from P-B-L (you can read that post at: http://modelingthesp.blogspot.com/2012/11/modeling-sp-passenger-cars-coast-mail.html ). I still regard STR-29 as an excellent choice. But there is now also a Tru-Color Paint option, their color TCP-135, SP Dark Olive Green, which airbrushes beautifully. Dennis painted my cars with the Tru-Color paint.
In my second post of the series, see the link to Part 4, at top, I mentioned the arrangement of lettering for most SP round-roof (sometimes called “Harriman”) baggage cars. The B end of the car can be identified in some classes by an external handbrake lever, but always by the end toward which the brake cylinder “points” (that is, indicated by the pointed end of the cylinder). That is the end of the car which, on both sides, carries the legend “BAGGAGE,” while the other end, on both sides, says “RAILWAY EXPRESS AGENCY.” Also, when facing the car end from between the rails at the B end, the car side to your right is called the the right side. On most SP baggage cars, that right side was the location for the single battery box (if the car had one).
For this lettering, there is a truly excellent decal set out there, from Thin Film Decals, their set HO-160, “SP Heavyweight and Harriman Dulux Gold Lettering.” This set was shown in my third post of this series, which is at: http://modelingthesp.blogspot.com/2012/11/modeling-sp-passenger-cars-coast-mail.html . The film truly is thin, and the gold color excellent over a Dark Olive Green color.
Here is the 60-foot car, SC&F kit 1003, painted and lightly weathered. The body here is removable, so glazing can be added, and glazing could also be replaced someday if necessary.

But having shown the final product, I should mention a difficulty that any modeler may need to worry about. Dennis used stacks of pennies for weight in the center of the model floor, as he often does, but the floor, which has no real center sill and is thus a fairly thin casting, bowed in the center: 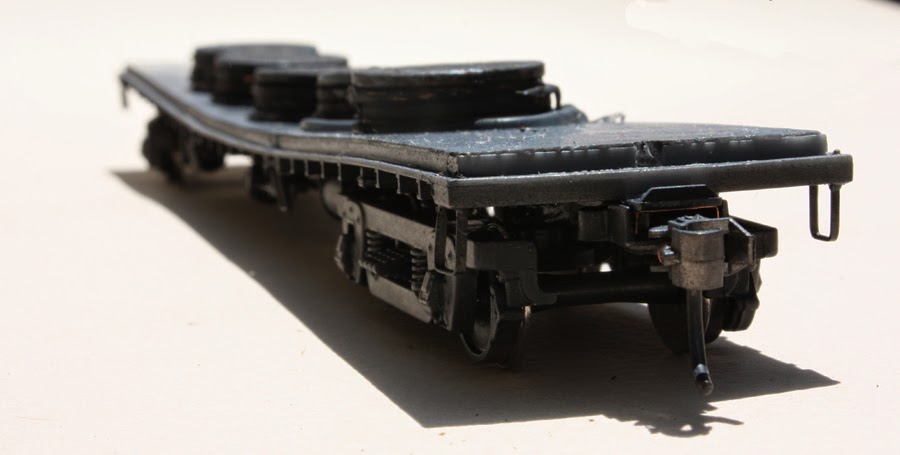 I should emphasize that I believe the car did not leave Mr. Williams’ shop this way, and the curve developed gradually. When I first noticed it, it was slight, but slowly got worse.
After some cogitation, I added stiffening beams in the form of rectangular brass tubing, 5/16 x 5/32 inches, to span from bolster to bolster. I drilled and tapped the approximate center of the edge of each beam for 2-56, then drilled a clearance hole for 2-56 in the matching location on the underframe. Putting a screw through the floor into each beam and drawing it down tight fixed the problem rather cleanly. Here is the modified floor and underbody section (you can click on the image to enlarge it).

I think if the car weights were not placed in the center of the car, but were at the ends or around the truck screws, this problem would not occur.
This said, I am delighted with the excellent detail of the Southern Car & Foundry body, and am pleased to be able to add this car to my Coast Mail train.
Tony Thompson
Posted by Tony Thompson at 11:48 AM