In my previous post about the town of Santa Rosalia, located at the end of my mythical Southern Pacific branch line, I described how far I have gotten to date with painting the backdrop for this section (you can read that post at: http://modelingthesp.blogspot.com/2014/01/constructing-santa-rosalia-backdrop_29.html ). I envision Santa Rosalia located at the mouth of the Santa Maria River, just at the Pacific Ocean shore; see my earlier post at: http://modelingthesp.blogspot.com/2011/01/layout-design-locale.html .
With that location, Santa Rosalia can have a modest waterfront, and should be able to serve as a home port for fishing boats. [I will discuss the Central California fishery and its boats in a future post.] Before I went to the next step and began arranging track for this part of the layout, then, I needed to identify where I would place a waterfront scene. This post takes up that subject.
As is probably evident from photos of this part of the layout, I really don’t have enough space to model very much seafront or piers of any size, so I decided to settle for a modest wharf. Anyone setting out to do this ought to look over John Pryke’s fine article in the September 1997 issue of Model Railroader, pages 60–65, as he presents a number of nicely worked-out details you can add. Pryke did another nice article on waterfronts in the Model Railroader issue for February 2010, or see the  series in Model Railroader from last year, on their “Rice Harbor” layout, especially the March 2013 issue with an article on building the harbor. My main difference with these articles is in the method of making water, about which, more in a moment.
I decided that a seawall would be an adequate way of depicting the shoreline near my future fish cannery. As it happens, Frenchman River Model Works makes a nice set of cast resin parts (part no. 1573) which are rows of pilings, one way to make a seawall. I reasoned that if I added details like bollards or bitts or cleats along the edge, I could tie up a model boat to this seawall. And Frenchman River offers detail parts of all those mooring devices, so I ordered a selection of them.
Here is how the Frenchman River seawall parts look in the package. Each of the three sections is five inches long and about 1-1/8–inch high, a little taller than fits my situation, but if need be they can be cut down. 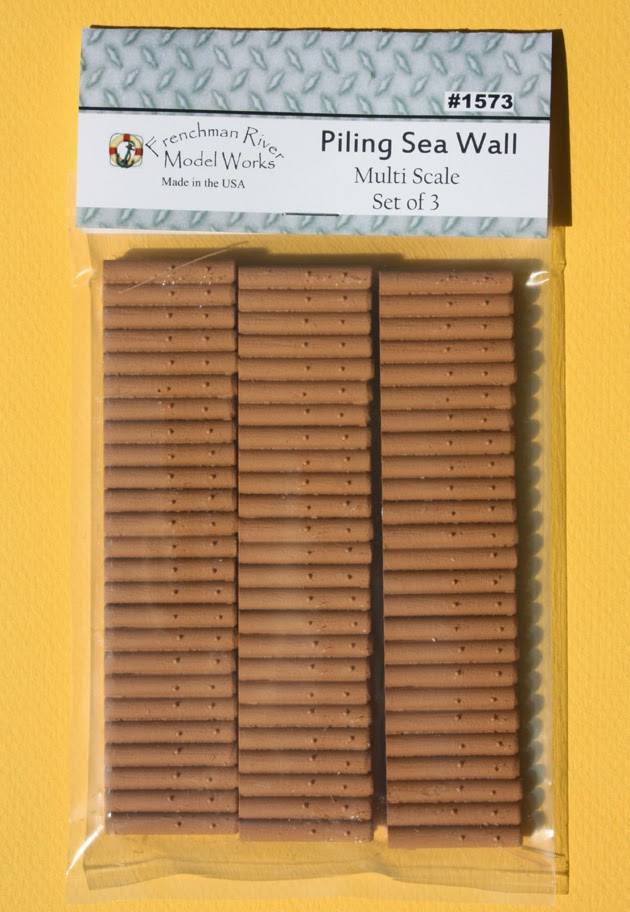 The molded brown color is too light and too brown for realistic pilings, but this is easily changed, and is an excellent base color.
I approximated the size of the area I wanted to model as water, and cut the Homasote in that area accordingly. This is in the back corner of the Santa Rosalia extension structure. I only sought to have enough water to include a tied-up fishing boat [I will return to the boat in a later post], so this is not an extensive marine scene. I also added a raised walkway along the edge of the seawall, as is often seen.
This photo shows the corner where the water will be (the exposed plywood, at this stage). It is the far corner of Santa Rosalia, visible in the second photo of the post cited ate the top of this post. At this stage, the walkway is just Homasote strips. 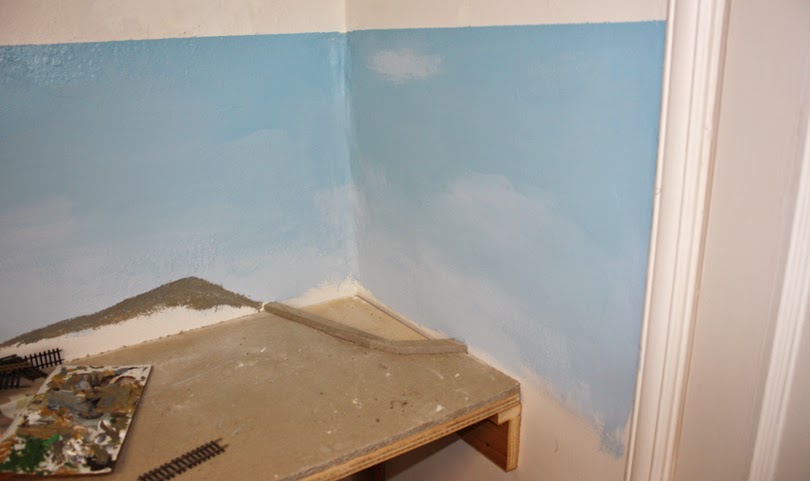 The next step was to prepare the area for the water coating. I like to make a small-radius cove along the edges where the backdrop meets the horizontal surface, so that the corner is not obvious.
My usual method of making model water does not use clear casting resin. Aside from the complications and mess of placing the resin, I have noticed on the layouts of others, that over time that the resin surface becomes dull and cannot really be cleaned. I long ago decided to represent water some other way.
In my ocean beach scene, I painted the color of the water, then used gloss medium as a top coat, which dries clear and nicely glossy (you can read about it at this link: http://modelingthesp.blogspot.com/2013/11/rebuilding-my-ocean-beach.html ). Not only does it seem to clean well with a damp sponge, it can readily be re-coated with more gloss medium if needed. I’ve been very happy with my ocean water in that beach scene, and will use the same method here at Santa Rosalia.
Tony Thompson
Posted by Tony Thompson at 10:07 AM