I began this thread on the heavyweight sleepers operated by Southern Pacific (in my modeling year of 1953) with a fairly broad introduction to the topic (see: http://modelingthesp.blogspot.com/2014/07/modeling-sp-passenger-cars-heavyweight.html ), and showed some examples of unmodified Rivarossi (later imported by AHM) Pullmans of 12-1 configuration — that means 12 sections, 1 drawing room.
But although SP did purchase a large number of 12-1 sleepers from Pullman in 1948, they purchased even more with additional room accommodations, which SP evidently preferred, such as the 8-1-2 car (8 sections, 1 drawing room, 2 compartments). To get to cars like that from the 12-1 Rivarossi model requires modification. My second post (you can read it at: http://modelingthesp.blogspot.com/2014/07/modeling-sp-passenger-cars-sleepers.html ) showed the modification method published by Thomas C. Hoff in Mainline Modeler, and presented the window movement/substitution process for modifying Pullman configurations.
I showed in that second post (cited above) the first steps in modifying the 12-1 Rivarossi body to the 10-1-1 configuration (10 sections, 1 drawing room, 1 compartment). Once the window-correction part of the modeling was complete, I sprayed the car body with a light gray primer (I used Testors “Flat Dark Aircraft Gray,” their #1226, though I sure wouldn’t call it dark gray), which serves as a “witness coat” to help spot areas needing further work, as well as a base coat for the final color.

The interior is also sprayed gray, though later I will repaint the interior with a sort of buff color to look like a Pullman interior.
With the primer in place on both the interior and exterior of the body, I was ready to address the roof and other details. Essentially all of the “room” accommodation cars purchased from Pullman by Southern Pacific were air conditioned, so I needed to model the roof with the kind of add-on air ducts which Pullman applied.
In previous models, I used the wood duct shape once sold by Walthers, and that approach required not only a lot of filing and fitting of the wood part, but a lot of fussing (and a whole lot of Squadron Green putty) to make the faired ends of the ducts. Today the New England Rail Service (NERS) part #250 is the way to go, with ducting which fits the Rivarossi roof very well. You get two full-length ducts, and an assortment of duct end fairings, with instructions. 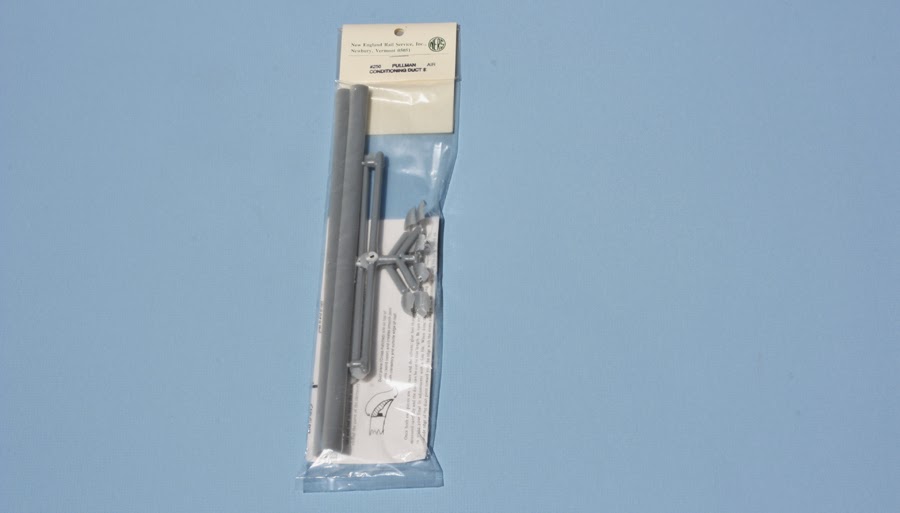 Your hobby shop can get it from Walthers, or you can order direct.
Each specific Pullman received particular ducting. In the early days, it often only served the sleeping part of the car, with aisles and restrooms left un-air conditioned, but as the retrofitting of air conditioning progressed through the fleet, cars tended to receive more and more duct length, with a fair number getting full-length air ducts on both sides. You need to find a photo to model from, if you want to reproduce a specific car accurately. I used the photo of one of SP’s 10-1-1 cars on page 174 of Volume 2 in the SPH&TS series, Southern Pacific Passenger Cars (Pasadena, 2005).
The Rivarossi roof part is entirely molded in clear styrene, since it also serves as the window glazing. Here is the Rivarossi roof prior to painting, with the NERS ducts applied on each side (this happens to be the roof for a 12-1, my model of Tuolumne, shown in the first post cited at the top of this post). I found these ducts really easy to apply.

Final rooftop color will be a pretty dark gray, to suggest weathered black roof cement. For this, I like the Tamiya “Gunship Grey” color, their no. TS-48.
I also like to make a modified car interior for Pullmans, since these cars have enough window space that the interior is actually visible in passing trains. But that topic can be a little complex, so I will defer description of it to a future post.
In another future post, I will show the result of airbrushing the car sides and ends with Tru-Color Paint #135, SP Dark Olive Green, and then lettering.
Tony Thompson
Posted by Tony Thompson at 12:19 PM