The virtues of variety

I have been rediscovering something I guess I knew long ago, but keep running into. It has to do with variety. Like everyone, I have occasional projects which are big and truly all-consuming and can give great satisfaction when completed. But there are other projects which kind of elude control and have the opposite effect.
I have written in previous posts about the roadblocks to completing projects that can arise from lack of planning, or poor planning (for example, http://modelingthesp.blogspot.com/2013/10/planning.html ). But here I am talking instead about the kinds of projects that “grow like Topsy” (a phrase which developed from Uncle Tom’s Cabin—you can Google it) and become too large or too repetitious to enjoy.
To illustrate, I once decided to build about six or seven Red Caboose box car kits all at once, reasoning that repeating the individual steps like attaching brake gear would be relatively quick, and doing it six times would hardly take longer than once. Any reader who has tried this probably realizes the flaw—for any one step, the belief in efficiency is true, but when continuing with entire kits, with lots of parts and thus lots of steps, the process becomes way too much like work. It seems to take forever, and none of the cars are getting finished, because of course all are at the same stage of incompletion. The satisfaction when you do finish doesn’t seem to compensate—at least for me.
Or I have fallen into the trap of picking up “similar” projects when starting on one. For instance, I need to build a loading dock for a structure, and decide to build four loading docks for four different structures which need them. Again, I get bogged down in what was supposed to be a quick job, and get tired of the detailing, instead of moving ahead with the structure I was originally doing. Jack Burgess has a principle he adheres to in his own modeling, which would apply here (I hope I’m stating it correctly): do each project to completion, whether it is a structure, or a small area of layout scenery, or a locomotive, or whatever. That way, you stay focused on that one project’s needs instead of having to think of several projects at once.
Sometimes it helps to simply let my imagination jump to something completely different. Here’s an example. I am not sure I will find room on my layout for a barn, but even though I’m not a farmer, I do know one important thing about barns. Having lived in and driven through different parts of the country, I recognize that barns are very regional in appearance. A New England barn is not like a Pennsylvania barn, nor an Iowa barn. Since I model California, the distinctive old-style California barns are what I would need to model. Here is just a single example, located south of Livermore, California. 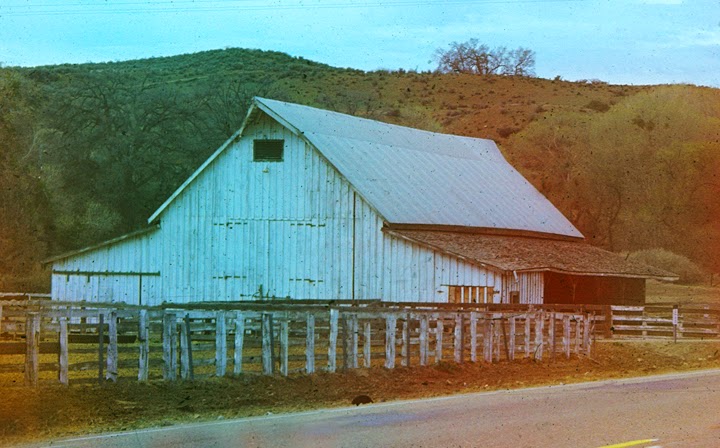 This barn is typical of many, in having the different roof angle to the additions on each side. This particular barn is painted white, though it is common in California to see barns which are either unpainted, or have their paint weathered away. This one also happens to be built with board-and-batten siding, though plain planked siding is common too.
Thinking about building such a barn for the layout, and finding a spot where it could be placed, is liberating just because it is a different kind of project from other things I’m doing. I have often found it refreshing to do this kind of varied thinking—and at the same time avoid those oversize or over-complex projects which bog me down!
Tony Thompson
Posted by Tony Thompson at 10:55 AM