In an earlier post, I described several alternative approaches to waybill design, all stemming from prototype practice, but with different formats and waybill sizes. It was entitled “Waybills-20” and can be found at this link: http://modelingthesp.blogspot.com/2012/03/waybills-20-other-approaches.html . In the present post, I want to update this a bit.
An aspect I had not considered in thinking about waybill design is the problem of the person with weak eyesight. In the latest issue of NMRA Magazine (yes, that’s its full name), for April 2012, there is an interesting article by Jeremy Dummler (pages 34 to 37) about a range of model railroading issue for “a low-vision person.” He mentions the matter of type sizes on model waybills, and of course recommends that both type and document size be larger than might otherwise be desirable. I was flattered that he both followed the general pattern of my waybill designs, and also gave the URL for this blog, as part of his article.
I should also apologize to Jeff Aley, who likewise followed some aspects of my waybill design in devising a waybill system for Tom Weissgerber’s fine layout in Folsom, California. I have mentioned Jeff’s work previously, in comments about the last Cocoa Beach meeting (here’s a link: http://modelingthesp.blogspot.com/2012/01/cocoa-beach-meeting-comments.html ), but that’s not an excuse for failing to describe Jeff’s work more fully, not only because I’ve operated at Tom’s a couple of times and used those waybills, but also because Jeff contributed a segment of the clinic I’m currently giving about waybill design.
Jeff made several interesting changes. First, he wanted to have the car initials and number in the correct prototype location on the final document, so unlike my own bills with car sleeves, he has the blank area at the top. Second, since train crews typically only care about consignee information and ignore the shipper side of the story (which is one reason prototype waybills were typically folded in half the long way, so that only the consignee part was visible), Jeff only showed that part on his bill. Here is what it looks like; you can see the car information (which is on the sleeve, not on the waybill inside the sleeve) in the upper part. 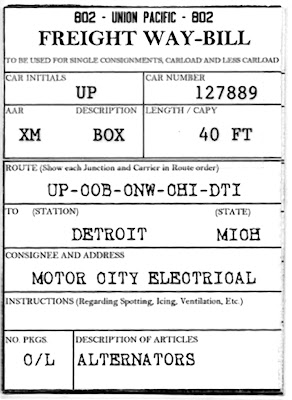 Jeff also simplified his Empty Car Bills, so that all cars moving homeward, that should not be confiscated, have white Empty Car Bills, while yellow Empty Car Bills are used only for cars which can be confiscated. This makes the job of yardmasters on Tom’s layout easier (they also wear the hat of car distributor), because they can easily spot the cars they can confiscate for use, by the yellow color of the paperwork. Even though this is a compromise with the prototype paperwork, in which all Empty Car Bills were the same, it is a compromise which expedites operation. And we all make lots of those.
These two examples expand further the point I wanted to make in my prior post about alternative approaches to a more prototypical waybill: there are various ways this can be done, and more and more modelers are doing so.
Tony Thompson
Posted by Tony Thompson at 11:41 AM