Survival from my old layout

The layout which I had when I lived in Pittsburgh, PA, up until 1994, no longer represents my modeling goals, so I wouldn’t make too much of what it was like. And in any case, much of it no longer exists. But I have had a couple of requests by e-mail to show my current track plan. The peninsula in the old E-shaped layout became the core of my current layout, and much trackage on that peninsula remains the same, so it may be useful to show that portion of what I had done on the old layout.
I was honored to have my layout story on the cover of Railroad Model Craftsman or RMC in the issue for June 1990 (pages 64 to 69). It was there partly to help publicize that year’s NMRA National Convention in Pittsburgh, for which I served as Clinic Chair. I will (with RMC’s permission) reproduce here some of what was in that article.
The cover shot was an interesting experience, as the publisher of RMC in those days, Hal Carstens, pretty much insisted that RMC cover photos feature locomotives. I had not done such a photo for my submitted article, so was requested to create one. The resulting cover was dramatic, and RMC staffers even included the emblem then used for my freelance short line, the Lompoc & Cuyama.

I have a copy of this magazine cover framed in my layout room, even though the Lompoc & Cuyama is no more.
Photos inside the magazine (which were taken by me) were, frankly, not great, but one had a dramatic angle that I still like, so I include it here. It’s a local train returning from Ballard. Most of what can be seen in this view of Jalama (now Shumala) is still part of the layout.

The track plan was presented in the magazine in two parts, and the part which remains relevant is the peninsula. It is shown below, along with a key for the structures as they were then (room size shown is the old room). Not all features shown remain exactly the same, and a number of structures are being replaced or repurposed. Some of those changes were described in presenting the current town plan for Ballard in an earlier post (available at: http://modelingthesp.blogspot.com/2011/01/layout-design-ballard.html  ). And as I’ve discussed in a previous post, the town of Jalama is now Shumala; see my comments and explanation of the current layout locale at: http://modelingthesp.blogspot.com/2011/01/layout-design-locale.html. But despite changes, hopefully this drawing conveys the general arrangement that my current layout follows. (Click to enlarge.) 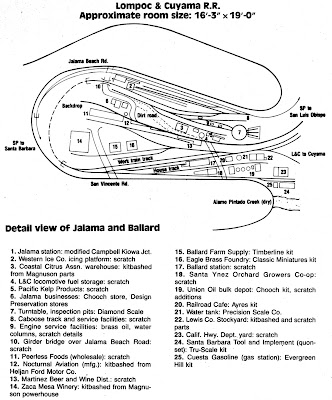 The SP main line shown entering a tunnel at the left end of the peninsula (identified as “SP to Santa Barbara”) now swings around under Ballard, where my staging table is located, and rejoins itself at the right side of the plan (near the notation “SP to San Luis Obispo”), making a full loop. In addition, the peninsula is now more nearly parallel-sided, instead of tapering toward the right-hand side, as shown in the drawing.
As other parts of the current layout become suitable for viewing, I will post about them. At some point I will also draw a current track plan.
Tony Thompson
Posted by Tony Thompson at 11:02 AM