A common flat car or gondola load is the large crate or item of machinery which is too large to load through a boxcar door. Crates are easy to make and can represent a very wide variety of cargoes, from assembled automobiles to machine tools to replacement parts of any kind.
In the 1950s, some machinery might be shipped without a crate, especially if it was “outdoor” equipment which wouldn’t be harmed by a little rain. Non-crated machinery might well be covered with a tarpaulin, but this is not easy to model convincingly. Most modelers have seen the commercial cast resin versions, in which the tarp looks like it is stretched as tight as a drum head. I don’t know if prototype tarped loads are ever done that way, but I have never seen one like that. Instead, tarps are loosely gathered and nailed or tied down around the load. My experiments in reproducing this kind of appearance with paint-saturated facial tissue have been only mildly successful, so I won’t address those here.
I will begin with a cast metal diesel engine. These were painted yellow and I attached a Caterpillar sign. All or nearly all of my open-car loads are removable so that cars can run empty as well as loaded. With these engines, I noticed that they tended not to remain straight on the flat car deck when simply placed there, even though they are fairly heavy, so I added a “locator” strip. This is a thin brass strip, glued beneath the load supports, which drops into the car’s stake pockets. When painted black, it is all but invisible. Here’s an end view of it; note the end bracing on the end of the engine frame.

Here is a pair of these engines on a flat car. The only drawback to this method is that the width across model flat cars is not always consistent, and this kind of locator may not work for all the flat cars in your fleet. 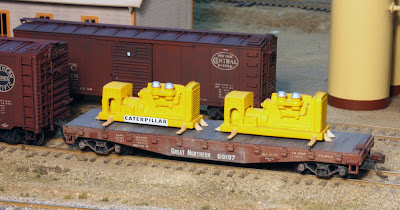 Crates are more commonly used than uncovered loads of machinery. Protection from weather or theft is one reason; multiple parts in one crate is another. (It was common for uncovered machinery to be accompanied by one or more crates of additional parts.) Prototype crates come in all styles and sizes, and may be made from a variety of materials.
I will just show a few examples of crates on my layout. Since my track plan has no reversing loop, all cars always show the same side to the operator/observer (unless physically reversed in staging). That means that crates might as well have different information or logos on each side, providing two loads (according to waybills) for each one built. This is one of them; I’ll show the Allis-Chalmers side first. 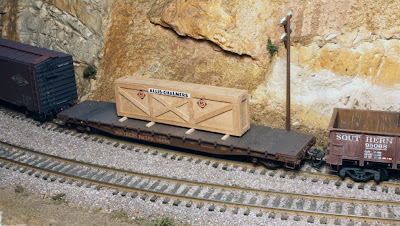 Here is the other side, with info for Wagner mining machinery. I made color copies of actual logos from ads in old mining journals for the signs on these cars. This crate fits either flat cars or gondolas.

Here is a different crate, again with two sides (this crate will only fit on a flat car, and has a brass-strip “locator” on it, as I described above for the Cat engines–it should be easy to spot). The first side advertises the Fort Worth Steel and Machinery firm (a maker of oil-field equipment):

The other side shows a logo for Hardinge Company mineral processing equipment (other products then included lathes and other metalworking equipment): 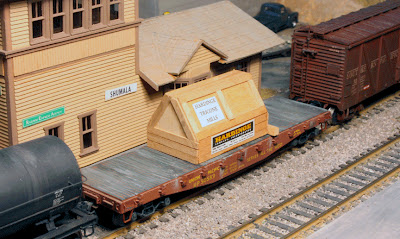 An inspiring example comes from modeler John Golden. This load of metal or plywood containers (no two alike), painted and addressed to the U.S. Navy Supply Center, Norfolk, VA, looks realistic and would be easy to make from styrene. I plan to make one or more loads like these, and will arrange the tie-downs so the loads are removable. John’s load on this car is in fact a commercial resin product, from Sunshine (Sunshine called it the “Overseas Crates” load, now out of production), but I include it because it would be a simple matter to do the same from scratch. The flat car is Tichy (John tells me that its car number needs to be corrected), and John took the photo.

These examples can easily be multiplied, but I think the point is evident, that this kind of load is simple to make and effective in use.
Other than John Golden’s load photo, I haven’t included commercial loads in this post, but may do that in a future post, because there are some good ones available. Since that seems to me like a separate subject, I will treat it that way. In the meantime, consider making a couple of simple crates for your open-top cars.
Tony Thompson
Posted by Tony Thompson at 10:05 AM