I received an interesting e-mail, asking about the distressed top chord in my model of the Pennsylvania 65-foot mill gondola (class G26), from the E&B Valley kit, shown in my post on long gondola loads (available at: http://modelingthesp.blogspot.com/2012/03/open-car-loads-poles-and-girders-in.html ). The question was about the distressing method and results.
The model was assembled pretty much as E&B Valley directed, but the car, if built stock, rides much too high above the trucks. This was noted in the original reviews of this kit in both Model Railroader (August 1981, pp. 44-48) and Railroad Model Craftsman (November 1981, pp. 101-105), and the obvious corrections were shown. I followed these suggestions. This E&B Valley kit was later sold under the name “Eastern Car Works” and is often seen at swap meets.
I removed the kit’s coupler pocket from the center sill and sanded down the coupler pad on the floor, so I could install a Kadee coupler box flush with the car floor. I also cut down the truck bolster nearly to the level of the side sill. This resulted in a more realistic car height. If you’d like to read a fuller account of how to do these modifications as well as additional detailing, an excellent source is Elden Gatwood’s article in the electronic magazine, the Keystone Modeler, issue No. 9, page 32. You can access it at: http://www.prrths.com/Keystone%20Modeler/Keystone_Modeler.htm .
Now to the distressing of the car sides. I have tried two methods with plastic freight cars like this gondola. One is to warm the car side with a nearby but not touching (and hot) soldering iron, then using the sides of a nail or screwdriver to press the top chord outward or inward. A second method tried was to use a hair dryer, instead the soldering iron. The first method is good at softening local areas only, if you want a very local irregularity, but care is definitely needed not to touch the model with the iron (don’t ask how I know). The second method heats a bigger area, and it can be too easy to make major bends in the car side, but you have a little more scope in what you do.
Here is a top view of the Pennsy gondola, and if you click to enlarge the image, you can see all the various bends and dents. 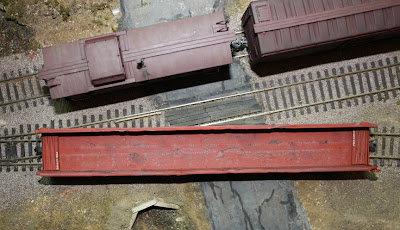 These bends are probably too gentle, compared to what happens to prototype cars when subjected to abusive loading, but in HO scale they look all right. Here are some close-ups of the same car sides: 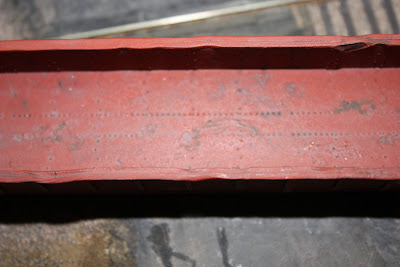 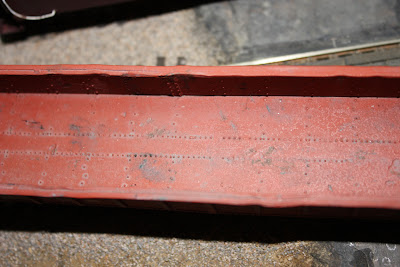 The car is represented as fairly recently repainted, thus the weathering is not very extensive, on either sides or interior, but a more heavily distressed and dirty interior would probably be more realistic.
I haven’t done this process to that many of my steel gondolas, and would suggest that as long as you have at least some of your cars distressed, the “look” of your fleet will be improved. But if I were modeling a steel mill, where abusive loading of heavy steel shapes was practically a daily occurrence, I would want to show a lot more damage in these cars.
A friend in the days I lived in Pittsburgh told of having worked, when he was a teenager, as a crane man in one of the area mills, and watching the experienced crane operators vying to see who could make the structural shapes bounce the highest when dropped into gondolas. I would guess it is hard for modelers to exaggerate the resulting damage to cars.
Tony Thompson
Posted by Tony Thompson at 9:01 AM