There have been several modelers around the country in the last few years who have been experimenting with ways to do model waybills in more prototypical fashion. I am one of those, and have been describing my results in a number of posts to this blog, of which this is the 20th. Those prior posts are readily identified in the archive of this blog by the thread title, “Waybills.”
One notable discussion of choosing a waybill system and experimenting with details is that by Bob Sterner, for his Soo Line layout. Bob is planning to use a somewhat different format than mine, and has usefully described the thought process behind his choices so far. He does use a clear “car sleeve” like the ones I’ve described. Several of his posts can be found at this link: https://sites.google.com/a/bobsworkbench.com/bobsworkbench/operations/layout-waybills .
In a similar vein, Frank Hodina is choosing to make a large waybill, about 4 inches square, which will be folded in half–as were prototype bills in many cases–and then placed in the same kind of 2 x 4-inch sleeve which a number of modelers are using, and which I’ve described for Otis McGee’s layout (see: http://modelingthesp.blogspot.com/2011/07/waybills-9.html ). At one stroke this provides more space for information, and duplicates the prototype arrangement of the center fold of the document.
Here is an example of Frank’s waybill, which is prepared in Microsoft Excel. He has a coding box in the upper left to help crews get cars into the right trains (and to the right sidings). It can be compared to the prototype waybill I showed in an earlier post, at http://modelingthesp.blogspot.com/2011/02/waybills-4.html . 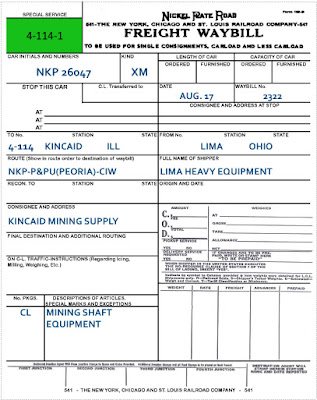 In my view, this is an extremely realistic waybill. But when folded in half, the crew will be even more unlikely than ever to look at the information on the right half of the bill. It’s an individual choice if this is seen as a drawback.
Many readers of this blog will have seen Ted Pamperin’s fine article in Model Railroader, in the issue for February 2012 (page 45). Ted not only describes the system he, Tony Koester, and others in the New Jersey area are using, but provides a number of very interesting details on how the Chesapeake & Ohio (Ted’s prototype) handled the complexities of coal traffic. Ted is the person who first found the very useful 2 x 4-inch side-entry sleeves many people are using. He has also done a fine job of compactly describing the intent and implementation of a prototype bill system. Ted gives outstanding talks at modeling meetings, and they are well worth your time if you find one on the schedule of a meeting you’re attending.
I do have some minor issues with what Ted describes. I personally don’t like the non-prototypical inclusion in Ted’s waybill of directions identifying the siding at which a car is to be set out. I also disagree with his use of lower case letters when prototype waybills of his era were all upper case, and I suspect he has already corrected that feature. But those are details, and overall, I highly recommend this article for anyone with any interest in the current movement toward more prototypical waybills.
In an earlier post giving comments about last fall’s meeting at Lisle, Illinois, I summarized an outstanding talk by Dan Holbrook, and a fine accompanying talk by Perry Sugarman. (My summary can be viewed at: http://modelingthesp.blogspot.com/2011/10/meeting-highlights-lisle.html .) Dan’s waybills are a little larger than most, and somewhat resemble the Frank Hodina version shown above. My understanding is that Dan plans to write an article about his current waybill system, so I won’t go further into detail here.
These are not the only “alternative waybills” out there, but these should give a flavor of some thing that are being explored. As more come to light, I will post about them.
Tony Thompson
Posted by Tony Thompson at 11:14 AM