Last Saturday, March 10, was the annual meeting in Northern California called Winterail (supposedly named by analogy with the famed drag racing competition called the Winternationals). It started in the late 1970s with a small number of avid rail photographers who got together to look at each other’s slides, in the early years in motel rooms. Of course, the 35 mm slides of former years have given way to digital presentations. Today the meeting is held at the Masonic Center in Stockton, where the meet has taken place for most of the last 20 years, and because of the auditorium size, attendance has to be limited to 1000 people (give or take).
This year was the 34th Winterail in succession. For years, Dave Stanley, later with the help of Ken Meeker, was the producer, while today Vic Neves and Cheryl Meeker handle the duty, with the help of a considerable additional staff and a team of roadies. The same logo has been used for many years, originally created by John Signor and now the iconic emblem of the event. 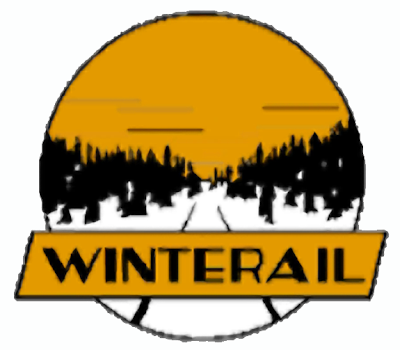 Over the years, many of the great rail photographers of the nation, not just the West, have presented at Winterail, though the emphasis is definitely western. This year was no exception, with Dick Dorn, Tom Gildersleeve, and Mike Danneman among the presenters, and Stan Kistler narrating a presentation of photographs by the late Al Rose. The presentation quality is dauntingly high every year, and for many railfans, these shows, starting at noon, are the core of Winterail.
But there are also world-class railroadiana sales rooms, starting at 9 AM, where everything from railroad photos, paper and books, to complete Mars lights or semaphore blades, are for sale. I have built most of my collection of SP employee timetables and other documents from sales tables at Winterail, and have often found other valuable items, particularly photos.
An important aspect for many of us is the camaraderie. This is a gathering of many, many railfans, railroad historians, and modelers from much of the west coast, and in many cases a chance to see old friends that one doesn’t see elsewhere. I have been attending now for almost 25 years, and it never has come close to getting stale for me.
There is a sampling of photos from various aspects of Winterail on their web site (though not from the current year); you can view them at this link: http://www.winterail.com/Winterail_Pictures.html .
This year, in addition to some useful books, I found a couple of items which fit perfectly into some blog subjects I had been toying with, so those posts will be coming along shortly. For me, Winterail is one of those events that is foremost on the annual calendar, and it would take a pretty major competing event for me to miss it. If you’ve never attended, consider it for next year. It is always on the second full weekend in March, so it will be Saturday, March 9, 2013.
Tony Thompson
Posted by Tony Thompson at 9:26 AM