In the previous post on this topic, I showed the pre-1960 prototype placards which were in use during my modeling year of 1953 (see: http://modelingthesp.blogspot.com/2012/03/tank-car-placards-prototype.html ). This post addresses the question, how are these applied in modeling?
The first issue is to identify what placards go with which cargoes. This turns out to be easily found. The Appendix to Ed Kaminski’s book, Tank Cars, American Car & Foundry Company, 1865 to 1955 (Signature Press, 2003) lists cargoes and identifies their category. Here are the abbreviating initials for the categories: 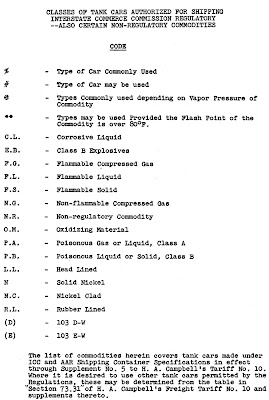 Among these can be seen the categories corresponding to the placards shown in the previous post, such as flammable, Class A poison (Poison Gas placard), Class B poison (Poisonous placard), corrosive, and non-flammable compressed gas (Compressed Gas placard).
The second step is to look up a particular cargo in the body of this Appendix and see which cargo category it has. For example, the chemical consignee on my layout, Pacific Chemical Repackaging, receives methyl acetate in tank cars (it’s a low-toxicity solvent used in paint and some other products). Here is the entry for this material, in the Appendix just described (you can click on this item to enlarge it):

This table entry shows it is a Flammable Liquid and is often carried in ICC 103, 103W, 104 or 104W tank cars. So just like the petroleum products delivered to bulk oil plants, such as gasoline, kerosene, heating oil, and diesel fuel, it will carry an Inflammable placard when loaded. The same process can be repeated for any commodity to be transported in model form.
How should these placards be displayed on models? Obviously the loaded placard should be applied when the car is being delivered to a consignee, and the empty placard (if needed) should then be applied for movement of the empty car. One possibility is to apply the loaded placard to one side of the car, the empty placard to the other side. This could be a problem for layouts with reversing loops, because on those layouts, both sides of cars will be seen at different times, but on layouts like mine, where only one side of a car is ever seen (unless the car is physically rotated to show the other side), it works fine.
If different placards on each side of the car won’t work for you, maybe you can make a placard holder which can rotate in its mounting hole. Then the two needed placards would be applied to each side of each holder, and when the car is in service, the holders would simply be rotated to show the proper placard to match the waybill.
The former Proto2000 tank car models, now called WalthersProto, are delivered with Dangerous placards when they are in the form of ready-to-run models. These look fine, as can be seen in this photo of a Union Oil tank car on my layout. I need to place Empty placards on one side of such models.

Unfortunately, the availability out there of good model placards is limited. Here’s a brief summary from the viewpoint of a 1953 modeler like myself. The “correct” set is Microscale 87-975, but it’s currently out of stock (more on that in a moment). Microscale has two other sets for later years: 87-228, which is for the 1970s, and 87-840, which is for the 1980s. As I’ve said, these are entirely inappropriate for the 1950s. Sunshine no longer sells decal sets separately, except at some shows, but they have done a nice set called “Placards and Tags,” which can be used for a few of the needed tank car placards in HO scale.
What about Microscale 87-975? I contacted Microscale recently, and they do intend to reprint this set, but as they put it, it doesn’t have “a print date set as of when.” The set has a number of very useful placards, though some are printed all in red. Certainly some placards, such as the Inflammable placard, of which I showed a prototype, clearly says on its face which part is to be printed in red, and it is only the word “inflammable.” I don’t know what was the most common color for the various one-color placards. But the Microscale version of the Explosives, Dangerous, and Dangerous Empty placards appear correct, and a great many other placards for box and other car types are included too.
In the absence of this set, what else can you do? I have simply used images of the placards seen in the previous post (once again, here is the link: http://modelingthesp.blogspot.com/2012/03/tank-car-placards-prototype.html ), reduced them to HO scale (while correspondingly increasing the resolution), to about 0.175 actual inches across the diagonal of the diamond, and printed them on a laser printer. These can be glued to the placard holders on model tank cars (click to enlarge).

These placards readily show their distinctive shapes (doubtless an intent of their design), with the half-black Empty placard at left on the acid car, and the round-center Corrosive placard on the caustic soda car at right. (Construction of the acid car was described in Railroad Model Craftsman, January 2012, p. 61; see also my post at: http://modelingthesp.blogspot.com/2011/12/new-tank-car-article-in-rmc.html .) The Corrosive placard, shown here in black, seems to have been sometimes printed that way, and sometimes in red, as in the Microscale 87-975 set. Decals would be sharper than these laser-printed placards and I will probably make myself a decal set with some of these black placards at a future date.
This is far from exhausting the subject of model placards for tank cars, but it provides an introduction for now.
Tony Thompson
Posted by Tony Thompson at 12:06 AM