The loading of poles and girders in gondolas follows the ideas already shown for lumber in gondolas, if the load is stacked and extends above the sides of the gondola. The interesting exceptions are girders shipped on edge, which I’ll describe in this post. But first I will show a pole load I use.
Many modelers will have heard of the idea to use chopsticks from Chinese restaurants, appropriately re-tapered if necessary, and stained a very dark brownish-black to represent creosoted poles. I’ve done that in some cases, but I have also used simple dowel, since not all poles are strongly tapered. My choice here was a 5/32-inch dowel, probably a little on the slender side, but photos do show some “city” poles of this approximate size.
My load was originally created for the very first Sunshine resin kit, numbered kit no. 1.1, for a Missouri Pacific panel-side 45-foot gondola. (I reviewed it for Railroad Model Craftsman in January, 1990, p. 104). The car sides in the kit were not modeled with the indentations on the interior which should be present in a panel-side car, so I wanted to make a load which would pretty well fill the car and hide the lack of a correct interior contour, while remaining removable. This is the loose load of dowels in the car:

Girders make an interesting and relatively easy load for gondolas (or flat cars). The old Atlas styrene through-girder bridge is a cheap and easy source of girders, which can also be kitbashed to greater or lesser lengths as desired. I just cut the sides away from the deck and proceed. If they need to be lengthened, I make an overlay strip of 0.005-inch styrene (approximately matching the ones already on the Atlas molding) to cover the joint. I used to impress rivets into such strips with a scriber, but now Archer rivets are a much easier and better-looking alternative (if you don’t already know this product, visit http://www.archertransfers.com/SurfaceDetailsMain.html .
Here is one such lengthened girder, as a load in the Athearn mill gondola. It is sufficiently long that the working end doors of the gondola need to be dropped to accept this load.

As you can see, I painted the girder a bright oxide red, like the color used on Union Pacific or Pennsylvania freight cars, which is like the “rustproof” paint used on steel assemblies. I used a Bethlehem Steel logo from an old magazine ad to adorn the girder.
Of course, girders like this might be painted in the final color to be used when they were installed as part of a bridge. I represented that in a different girder load, with aluminum paint, and another possibility would be black. Here is my silver girder, with a Jones & Laughlin Steel logo:

The gondola is a reworked E&B Valley model, representing PRR Class G26, with some distressing of the top chord with a heat gun. The girder has a low bracing arrangement which should probably be replaced by something like the bracing in this next project, a short girder.
My shorter girder was built from Atlas bridge remnants, and I have arranged it so it can be loaded on either a gondola or flat car. A girder this size might equally likely be loaded flat, but I have arranged it for loading on edge. Most of the Loading Rules diagrams for such loading are for loads across two or more cars, but they have in common diagonal braces on each side of the load (somewhat as shown above for the long Bethlehem girder), as in this drawing from the 1926 Rules: 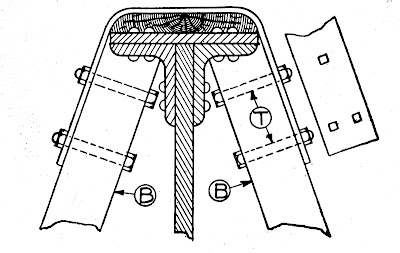 I used scale 6 x 6-inch stripwood for the bracing, with a strip of styrene scale 1 x 6-inch for the iron top strap (angled bends like these in styrene strip can be made with care), which I painted medium gray.

You can see in this view that I added flanges with holes for future rivet or bolt assembly on each end of this short girder. When in a gondola (this is a Detail Associates model), this load looks this way: 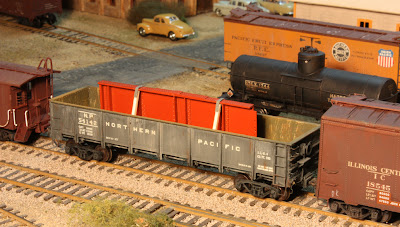 There are lots more long-load ideas in the Loading Rules books, and they are fun to build as well as fun to operate on the layout.
Tony Thompson
Posted by Tony Thompson at 11:47 AM