In several prior posts about freight traffic and waybills, I have mentioned an institution called the “bill box.” One such post was about “The Role of the Agent,” at: http://modelingthesp.blogspot.com/2011/10/operations-role-of-agent.html .) This box was for the purpose of communication between an agent and conductors who worked that location, when the agent was off duty. It was a small box on the exterior of the depot, typically locked with a switch lock, sometimes painted the color of the depot walls, sometimes a contrasting color such as red.
The agent could leave messages directing the work of the local switch crew in this box, which a conductor would retrieve on arrival; and the agent would have put waybills and Empty Car Bills for outbound cars there too. The conductor would then place in the box any waybills for arriving loads his crew was going to spot, and the Empty Car Bills for any empties to be spotted. The next time the agent was on duty, of course, he or she would retrieve the contents of the bill box.
A bill box can sometimes be seen in photographs of depots from trackside. I will show a couple of SP examples here. Both photos are from the Shasta Division Archives, and I’ve added an arrow to indicate the bill box. First is the depot at Goleta, California, on the Coast Division:

The second image is the freight house at Gervais, Oregon (about three miles south of Woodburn), on the Portland Division, some 40 rail miles from Portland: 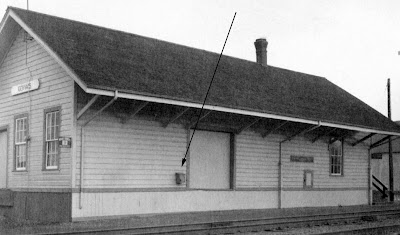 Both these boxes appear to be a contrasting color to the structure wall, though some other photos show a bill box seeming to match the wall color.
Given the above background, and my interest in the subject of freight paperwork and operations, perhaps you can understand my amazement, quickly followed by excitement, on seeing an actual SP bill box for sale at Winterail earlier this month (for a description of Winterail, you may go to: http://modelingthesp.blogspot.com/2012/03/winterail.html ). The seller did not even seem to have a price in mind (perhaps because of the full complement of original, prototype cobwebs inside the box), and we quickly struck a deal.
Of course, I immediately realized I would need an SP switch lock so I could accurately lock the box, and a switch key. Well, no better place to look for that kind of item than Winterail, and within minutes I had acquired both an SP lock and a matching key.
The box is fairly weathered and decrepit, but I’m tempted to leave it as-is, an authentic item relating to freight operations. Here it is, complete with SP switch lock. 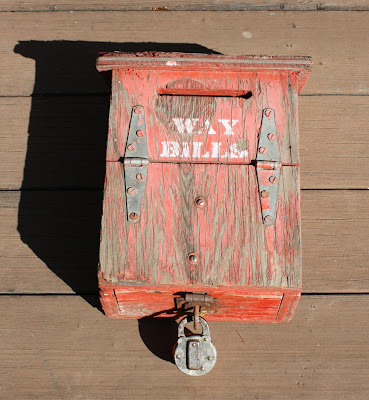 The hasp on the bottom, of course, shows how the box was opened. Here is a view with the lid propped open: 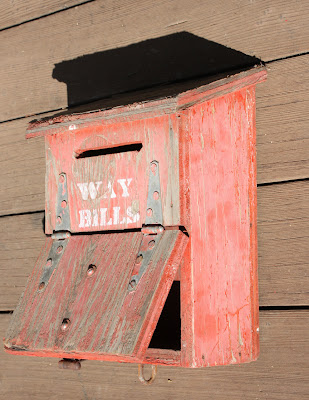 Given the box, and knowing that waybills were exchanged between agent and conductor by this means, what else might have been in the box? Often the agent left directions to the crew. Here are a couple of examples which may be indicative of the general type of thing I’m describing. I must admit surprise at how detailed and explicit these comments are, and I assume they are comparable to what the agent would have told the conductor in person. First, a 1967 example from Dixon, Illinois, provided by Chet French, in which the agent directs exactly which cars to get at each location (you may click on the image to enlarge): 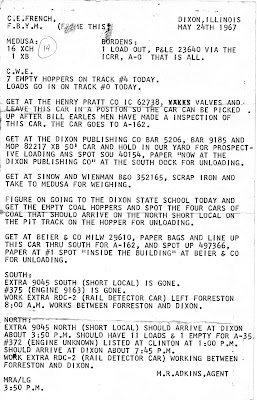 Every bit as explicit is this UP example, provided by Jeff Aley, from Hanna, Wyoming. It’s typed with upper and lower case and thus probably came from a conventional typewriter, not a billing typewriter (which typically could only produce upper case, as in the example above). 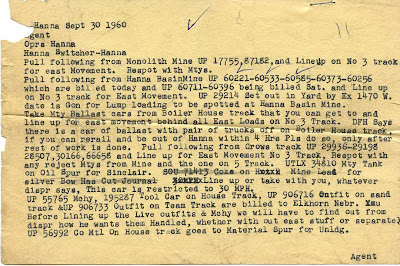 and interestingly, the following day the issue about the work cars has been solved: 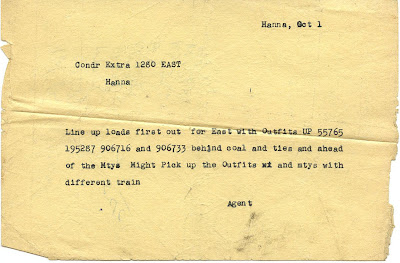 I don’t think I or many other modelers are going to contemplate directions to crews this explicit, when a bill box is in use in an operating session, but it does mean that directions can be pretty direct without exaggerating reality. What more could you ask?
Tony Thompson
Posted by Tony Thompson at 12:12 PM