Lumber loads were very important parts of traffic in the Far West in the 1950s, much directed to building booms in Southern California and in the Bay Area, but much also headed eastward to other destinations. Broadly speaking, in that era there were two categories of lumber shipments: rough lumber, and finished lumber. Finished lumber traveled whenever possible in box cars, with double-door cars preferred for ease of loading and unloading. Rough lumber was typically shipped on flat cars, but perennial shortages of suitable flat cars by several Western railroads led to frequent use of gondolas also. I intend to post later some modeling approaches for flat car loads, but this post today is for gondola loads.
There were AAR Loading Rules for such loads, as there were for practically all categories of open-car loads. As it happens, the rules for lumber were essentially the same for flat cars and gondolas. Here is a Rules diagram from 1926, which shows the basic approach (note that the cross-ties connecting the stakes are drawn as boards): 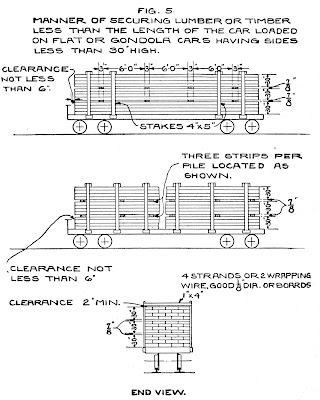 You can see that the minimum size shown for intermediate strips, called “binders” or “stickers,” is 3 x 7/8-inches, so nominal 1 x 4 lumber would be appropriate. These were required at that time to be spaced at not more than 30-inch intervals, but below the sides of gondola, no strips were required. The minimum number of vertical stakes per pile is three. These are to be tied together at the top with wire or boards.
The Rules stated that two piles, as in the middle sketch above, were preferred to single large piles on a car. It was later suggested that piles also be divided across the car width, in other words that the end view of the car would show two piles; in combination with the side view, this would make four piles per car. There were to be vertical stickers between the width-wise piles. In later years, a requirement was also added for stickers underneath the load, and the vertical spacing of intermediate stickers was increased to 48 inches.
For photos, a useful source is the issue of Railway Prototype Cyclopedia (no. 20) with an article on open-top loads. However, it is only about flat cars. The article also contains a number of reprinted Loading Rules pages, so is valuable for that also.
One advantage to building gondola loads generally is that the side stakes are set in folding stake holders on the inside of the gondola. Those stake holders can’t be seen with the load in place, so it’s not possible to tell if they are spaced correctly, and the modeler is free to space the stakes as convenient. As I will discuss when I post about flat car lumber loads, the situation is entirely different for flat cars.
Here is an illustration of an SP train in Oregon, headed for California in 1948. The head end is all lumber cars, and 22 are visible in this shot (SP photo N-1660-14); it happens that 9 of the 22 are gondolas. (And note that the composite gondola closest to the camera is an L&N USRA car, from their 74000 series. Though SP used its own cars very heavily for lumber traffic, cars of other railroads can certainly be seen in SP lumber trains.) 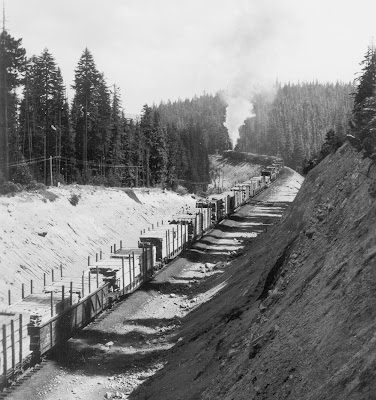 These loads almost all are in accord with the rule, of three stakes per lumber pile, and most are tied together across the top with wire. Stake heights in this photo are quite variable and in several cases greatly exceed the height of the lumber piles.
My approach to this type of load is much like what I described for gondola loads of pipe, to build up the material without full-length pieces on the bottom, where they are invisible. I sized the load I describe in this post to fit the Red Caboose steel GS gondola, because the interior width of that car is slightly less than the Detail Associates model of the same car, or the width of the Challenger brass cars (of which I have a couple, provided in return for my supplying Challenger with information on the cars–in all candor, I don’t often find brass freight cars worth the investment).
The material I used for this load was from a bag of wood strips purchased at a craft store. They are called “plain craftsticks.” The ones I found were sold under the name “Sovereign” (I think they are made in China), and they were attractively cheap (1000 sticks for $4). Some of the sticks were warped, but their ends can be used in the lower rows of boards. They are about 8 x 8-inches square in HO scale. This is what they look like:

I cut a strip of waxed paper the width of the gondola floor, and put it into the car, so that the first row or two of boards can be set up and glued in place, making sure the load fits in the car, while not gluing the load to the floor. This is a top view of the first three layers of such a stack: full-length sticks on each side and a few inside the load, but lots of intermediate rows having only short pieces at the ends:

This is continued to the desired height (this load became an eight-high stack), and the top layer of course is solid. Then I place three side stakes, using scale 4 x 4-inch stock, as squarely upright as possible, on one side. I then use a machinist’s square to make sure the stakes on the opposite side are located perpendicularly across from the first set, to facilitate later application of the cross-ties. Here’s how I apply the square to the middle stake:

Next the second-side stakes are glued on, and then I use scale 1 x 4-inch stripwood to make cross-ties. Wire was a more common cross-tie by the 1950s, and I’ve experimented with strands of copper wire from lampcord, but it’s fragile and hard to handle. Pending development of a better way to simulate wire, I will stick with wood cross-ties, which after all are shown in the Rules drawing, above. Here is how a completed stack looks:

Two of these stacks make a reasonable gondola load--I plan to make some bigger stacks too--and will serve as one of my gondola cargoes. To illustrate, here is SP 92947 (a Challenger brass model of Class G-50-12) being spotted at the team track in Shumala with a load of lumber by Consolidation 2829:

Lumber traffic is so visible on the SP in the 1950s, particularly on the West Coast, that it represents an essential part of any freight traffic plan. It is definitely part of mine, and gondolas need to be included as lumber carriers.
Tony Thompson
Posted by Tony Thompson at 9:44 PM