One of the distinctive characteristics of any railroad location was its depot. So part of creating a believable branch line of any railroad is to make sure depots are typical in style, or even are exact copies of standard depots. That was my goal in replacing the former Shumala depot, as I described in my first post on the topic. You can view it at: http://modelingthesp.blogspot.com/2012/09/a-new-depot-for-shumala.html .
In that post, I mentioned that the construction process for the structure would be written up for my November column in the on-line magazine Model Railroad Hobbyist or MRH. That issue has now been published, and can be downloaded free at: http://model-railroad-hobbyist.com/magazine/mrh-2012-11-nov . In the present post, I will mention a few details of that work.

Model materials. This depot was sheathed with “rustic” or drop-lap siding, 8 inches wide. Evergreen makes a novelty siding with 0.083-inch spacing which is 7.25 inches in HO scale, close enough. The SP plan then enables one to lay out the window locations and cut them out. I also used a number of sizes of Evergreen styrene strip on this structure, as listed in the column. All the Evergreen materials can be seen in their catalog listing at:

http://www.evergreenscalemodels.com/ .
Good approximations of all the windows are available from Grandt Line. You can view the architectural details part of their catalog on-line at: http://www.grandtline.com/products/arch/ho/ho_scale_architectural_windows.html . And the roof was made from Pikestuff shingle material, which I think gives a realistic “snug” shingle appearance, unlike the uneven look typical of applying Campbell shingles or equivalent. I used their part no. 1015. The entire listing of the Pikestuff (Rix Products) catalog is available at: http://www.rixproducts.com/prod02.htm .

Construction. I won’t say more about the construction process, as it was pretty fully described and illustrated in my MRH column. But there is one detail perhaps worth mentioned, which didn’t make it into the column. Though I am a firm believer in the old adage, “measure twice and cut once,” I nevertheless managed to mess up and cut the left-hand piece of the depot front wall too short. The fix? Rather than make a new, longer piece for the freight house section, since I had already cut out the door and window openings in the short piece, I just spliced on an additional piece of the Evergreen siding.
I glued the extras piece as a butt joint, lining up the boards on the front, then, on the back of the sheet, I added a splice piece of scrap material (the piece to the left—the extra piece on the right is the freight door):

The front of the wall section now looked like this (the original wall had been prepainted before assembly):

The joint is pretty tight, but to avoid any chance of it showing in the final model, I simply placed the downspout at this location, a trick learned from my friend C.J. Riley many years ago. Then I painted the new piece. Here is how it looked without the freight platform. Note the bill box just to the right of the bay window. 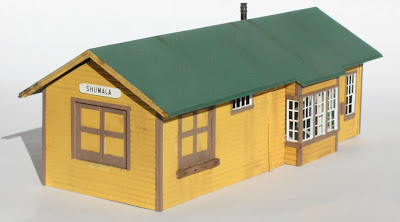 Colors. The colors used were described in my post on this topic, at: http://modelingthesp.blogspot.com/2012/10/modeling-sp-structure-colors.html . Latest news from Tru-Color Paints is that they now plan to issue all three of these major SP colors, Colonial Yellow, Light Brown, and Moss Green, as additions to their line. To see their on-line catalog, you can visit them at: http://www.trucolorpaint.com/index.php?p=1_2_Paint-Products .

This depot project has been an interesting and also satisfying piece of modeling from scratch. The availability of Grandt Line doors and windows which are similar though not identical to the SP items means that the project was pretty straightforward. The structure is now in place on my layout, including that vital bill box on the front wall.
Tony Thompson
Posted by Tony Thompson at 8:47 AM