Last weekend I joined about 25 others for an operating meet called “Desert Ops 2012” in Phoenix, Arizona. I really enjoyed the four layouts on which I operated, all of which were switching-intensive, exactly my preference. They were these: the late Gary Gelzer’s Great Northwest Coastline, David Doiron’s Southern Pacific, Rick Watson’s Southern Pacific–Exeter (and vicinity), and the Pebble Creek Club’s Great Lakes Western. I had a great time at each of them.
What I want to show in this post are a couple of interesting industries at David Doiron’s layout, primarily a cotton compress called Le Sueur, which had inbound and outbound tracks of a couple of kinds. He built it from the Walthers modular structure components, and though it isn’t finished, he allowed me to photograph it and describe it here.
This first view shows the side of the building where inbound light cotton bales are unloaded (the foreground track is a team track).

On the other side of the long building is the loading of outbound heavy (compressed) bales under a canopy, as well as a supply spot at the end of that siding, here occupied by a double-door box car. The nearer track in front of the box car is a cottonseed oil spot. The overhead bridge between the two buildings adds interest. 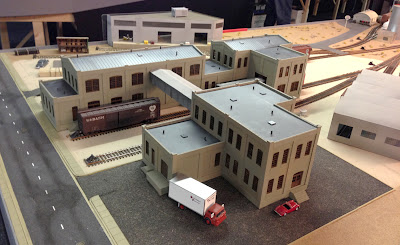 Finally, this third view shows the heavy-bale covered spot more clearly, with two box cars spotted. Even in an unfinished condition, this is an interesting and good-looking industry. Dave has also modeled the equipment inside the long building, with removable roofs so it can be viewed.

I liked the overall complex and thought it was interesting and convincing.
Behind the compress in the second and third photos above is O’Malley Hardware, a nicely done cut-off structure with three boxcar spots. Here is the building front on the track side. The opposite side has a clear plastic sheet over it, and the entire interior is detailed and open to the aisle behind it.

This was part of the area I switched while at Dave’s layout, and it was a fun part of my job. I’ve often commented that I’ve never visited a layout that didn’t give me a couple of ideas for things I could do, and this weekend was no exception.
Tony Thompson
Posted by Tony Thompson at 2:55 PM