I have been asked if I try and upgrade all my older models. (I realize the question may have been somewhat tongue-in-cheek . . . ) The answer is certainly “no,” because a fair number get replaced by a more correct or better detailed version of the same car. For example, I used to have a stand-in model for the important D&RGW box car series, numbers 66000–67499, a single-sheathed and distinctive car that was a mainstay of the Rio Grande boxcar fleet until after World War II.
The stand-in was a Train Miniature box car, with lots of detail shortcomings as well as inaccuracies relative to the D&RGW prototype, but with largely correct decal lettering. It really wouldn’t be possible to upgrade it without practically starting over, and I’ve sold it off. The replacement? The Westerfield kit for this car, kit no. 6453, which is accurate and very well detailed (this kit remains available from the new owner of Westerfield Models, Andrew Dahm, at his web site: http://westerfieldmodels.com/ ). 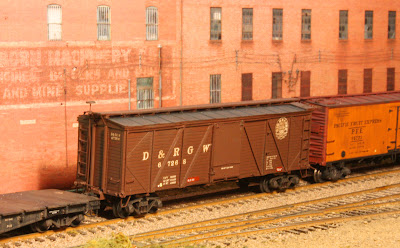 This model was built by Dennis Williams and decaled and weathered by me.
There are other examples of cars which really are not candidates to save, as the bodies are simply too far from accurate to try and modify. One example is the old AHM six-dome tank car. The design folks who worked on this one must have started from a photo of a smaller car, and just inflated the tank part (perhaps with air pressure!) until it was large enough for their 40-foot underframe — or large enough to “look good,” as one designer for a major manufacturer once said to me. But the car is over 12,000 gallons in size and is far larger than any prototype car of this type ever found. 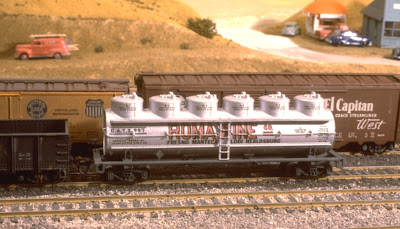 There is no answer for this one but to discard it. I sold off a couple of these that I had, but did keep one for my display case, where I have a collection of oddball cars that are fun to look at. These do surface at swap meets, and I can only counsel resistance to any impulse purchase.
Another such model, and one unfortunately still very much available commercially, is the by-now very old Athearn three-dome tank car. Although not at all badly done for its era, in its detail and overall realistic look, it is again simply way oversize. Despite years of searching, no one has ever found a prototype three-dome car as big as this. Here is one of these models, with a bogus paint scheme to go with the bogus body (Union only ever painted a car with this blue and orange scheme when a car was donated to a museum). 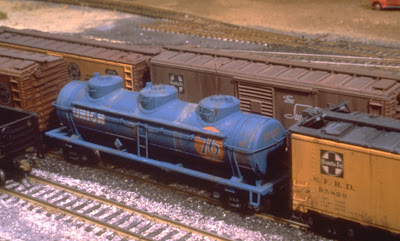 As some readers of this blog may recall, I do use Athearn three-dome bodies as sacrifice sources of extra dome tops to increase dome height, as I showed in my post about making a correct SP tank car. (You can view it at: http://modelingthesp.blogspot.com/2011/05/modeling-sp-tank-cars.html .) But as an operating model? Nope.
One more example. Back in the day when HO scale had very few tank car models of any kind, one tended to keep almost anything, just for variety. But some of those oldies are now being discarded. An example is this LifeLike tank car (a copy of an older Varney product). In past years, I added brake gear and new trucks and couplers, repainted it, and then lettered the car with decals for UTLX. And one other improvement I’ve made to cars of this heritage, the dome-top modification described in a previous post, can be viewed at: http://modelingthesp.blogspot.com/2010/12/upgrading-old-models-3.html .

So what’s wrong with it, even with the changes I’ve already made? Long list. The vertical brake wheel stand is a very unusual arrangement; the sill steps are crude and the walkway terribly thick (and a poor representation of a metal-grid walkway); the handrail supports are crude and unprototypical; there is no side ladder on either side; the dome-top manway cover is a strange and oversize arrangement; there is a ridge along the tank top, instead of the correct double row of rivets where tank sheets overlap; the end head is an odd shape; and the rivets representing the attachment of the head to the tank are far too far apart. I could go on, but you get the idea.
Are these defects correctible? Most are, but there are so many. And at the end of the day you would arrive at an 11,000-gallon tank car, pretty big for the steam era. I am not upgrading these Varney/LifeLike/Walthers tank car models except for a very few, kept mostly for nostalgia reasons.
So that’s it. I definitely have had and still have models on hand, that just cannot justify being upgraded. They not only need replacement for accuracy and detailing, but at present cannot even serve in mainline trains, under my existing standards. Many are already gone; the rest will follow.
Tony Thompson
Posted by Tony Thompson at 11:28 AM