Most of my posts about traffic, cars and operations have been about freight cars and freight trains, the area which is indeed the core of my interests. But SP’s Coast Line also hosted some interesting passenger trains (in addition to the iconic Daylight). I have long worked toward modeling some of those trains, and will summarize the background in this post.
In my earlier post about Coast Line schedules (you can view it at: http://modelingthesp.blogspot.com/2011/01/modeling-freight-traffic-coast-line.html ), I mentioned the principal passenger trains on the Coast, and also stated that since I don’t plan to model the hours of darkness, I lose out on operating the handsome Lark as well as the not so interesting Starlight (speaking just about modeling options), and also the “Overnight” black box cars of Trains 373 and 374. That really only leaves the mail train, numbers 71 and 72 in my era, in addition to the Daylight, as a scheduled passenger train. (I can always operate a passenger extra.) After 1948, the official name of 71 and 72 was merely Passenger, though employees and railfans alike generally called it the “Coast Mail.”
What were the schedule times in my year, 1953, at Oceano, the nearest station to my mythical junction of Shumala? Westward, Number 71 was due at Oceano at 8:35 AM, while eastward Number 72 was due at 9:12 AM. (I make Shumala about five minutes east from Oceano.) Thus I need to operate mail trains in opposite directions in rapid succession, about 45 minutes apart, during the morning hours of an operating session. In contrast, the Daylight trains were about a hour and twenty minutes apart at this location. I will discuss my modeling of the Daylight in a future post.
What consist should the mail have? Mail trains are an intriguing and somewhat neglected subject. I can recommend three important sources of background on this topic. First, the Introduction to the SPH&TS book, Volume 3 of Southern Pacific Passenger Cars, contains very valuable information on mail operations. This is supplemented by another SPH&TS book, The Ghost Trains of SP’s Overland Route, by Randall Cape and Robert McKeen. For information specifically about the Coast Line trains, I have spent a lot of time with Dennis Ryan and Joe Shine’s book, Southern Pacific Passenger Trains, Night Trains of the Coast Route (Four Ways West, La Mirada, Calif. 1986); Chapter 5 is about the “Coast Mail.” It’s both detailed and informative.
From those sources, and from numerous published and unpublished photos of nos. 71 and 72, it is obvious that the consist was dominated by 60-foot baggage cars, normally with a single RPO and a single rider coach. Often seen as well were 70-foot baggage cars, 80-foot baggage-horse cars, and 40-foot express box cars. At times, express reefers were included, and it was not uncommon to see deadheading passenger cars in either direction, heavyweight Pullmans, lightweight coaches, or other passenger equipment, normally on the rear end. In 1946, as shown in SP’s Equipment Circular No. 14 (MHP reprint), the train normally had nine cars in its Central Coast portion of the run, including two coaches, and after 1949 only a single coach, making eight cars. I can run a full-size version of this train.
The consists shown in Equipment Circular No. 14 have the RPO behind the baggage cars and ahead of the coach, but a few photos show the RPO at the head end. Power in the 1950s was usually a 4-8-4 (including SP’s handsome GS-1 class) or a 4-8-2, and occasionally a heavy Pacific. Let’s look at some examples.
First, a fine Wilbur C. Whittaker shot of Number 72 at King City on July 13, 1947. The train is powered by Class Mt-1 no. 4311 and has seven cars: three 60-foot baggage cars, an 80-foot baggage-horse, the RPO, and two coaches. 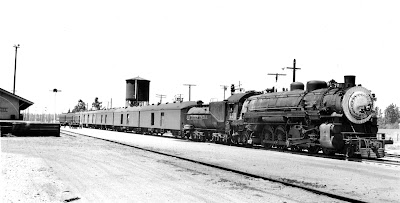 Next, a dramatic Frank J. Peterson photo (from the Robert McNeel collection) of Number 71 at Gaviota Trestle on October 15, 1949, with seven cars, this time with the 80-foot baggage-horse leading, and a single coach; the second car is a 70-foot baggage. Power is Mt-3 no. 4335. 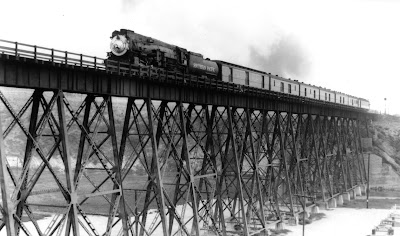 Both these photos show trains that are readily modeled and will operate comfortably on my layout. With the ability to vary consists with express reefers and express box cars on the head end, and deadhead coaches or sleepers at the rear, the mail trains can be an interesting part of my line-up. I will address modeling of individual cars in a future post.
Tony Thompson