I’ve long been fascinated by the J.M. Huber Company, because at one time they were major manufacturers of printer’s ink. The thought of entire tank car loads of printing ink intrigued me, and indeed, there are photos of the tank cars they leased over the years. I’ll come back to the tank cars, and my project, in a moment.
First, a few words about this interesting company. J.M. Huber is the founder’s name, and he began the company in New York in 1883, when he was a newly arrived immigrant from Germany. His company was to be the American arm of his family’s company in Munich, but by 1891 the American company became independent. At first the company made the dry pigments which go into ink. By 1916 they were manufacturing special ink for high-speed presses, and soon began to produce carbon black — a principal ingredient in black ink. During the 1920s, they also got into the kaolin clay business, because glossy coated printing papers are made that way with kaolin. They also got into oil and gas, and by the early 1950s had Oil & Gas, Carbon Black, and Clay divisions, along with a new Chemicals Division. Today they are an “engineered materials” company, with a wide and impressive range of products (though no longer including ink), and they remain privately held.
Let’s get back to the tank cars. There is evidence that Huber normally leased about a half-dozen cars at any one time, in a range of sizes, usually from Shippers Car Line. Here are a couple of examples, using two AC&F photos, courtesy of Ed Kaminski. First, a two-compartment, 8000-gallon car from the 1930s. Note that this is a four-course tank car. 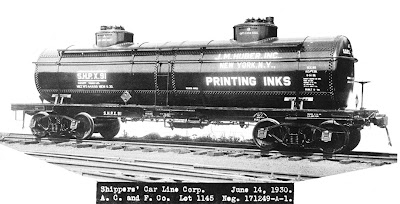 Here the full company name and location, as well as the cargo, are spelled out on the right side of the car. A second example is a single-compartment car of 4000 gallons capacity, with a slightly different lettering arrangement. This car was one of two built in 1937 and leased to Huber.

I decided to do a single-compartment car, and liked the idea of having a four-course tank car, so naturally I chose to use a Tichy four-course tank for the purpose. I included Huber lettering in the decal set I made up for Stauffer, El Dorado, and General Chemical cars (see my previous post at: http://modelingthesp.blogspot.com/2012/10/small-modeling-project-icc-104-tank-car.html ), and simply applied it to the model, using the above photos as guides. Here is the model which resulted, and you can see it is lettered like the single-compartment car above. 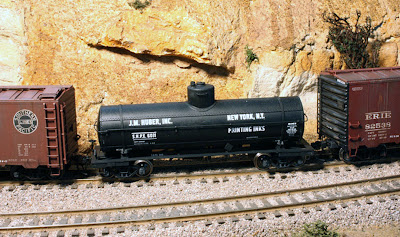 This is a simple project, the only challenge being to research and create the artwork for the decals. I don’t have specific proof that Huber leased a single-compartment car exactly like this. But I enjoy seeing, from time to time, a carload of printer’s ink in a passing train on my layout.
Tony Thompson
Posted by Tony Thompson at 4:19 PM