I received some comments after my two oral presentations at Naperville, and via e-mail subsequently, that a couple of parts of the handout material were not very clear. With that in mind, I intend to add a couple of short text summaries to supplement what was provided in the first two pages of the “bare bones” handout. The handout itself can be viewed via this link: http://modelingthesp.blogspot.com/2012/10/naperville-tank-car-handout.html .
One area of confusion was my formula for calculating tank car volumes. Nowadays, model manufacturers largely follow actual prototypes for tank cars, and the volume stated in the product name, such as 10,000 gallons, is pretty dependable. But in earlier days, that was rarely true, and a number of manufacturers appear to have simply cobbled up something that looked good to them. So a way to measure a model and know its gallonage seemed like a good idea.
The problem, of course, is that although a tank car is essentially a cylinder, it has domed heads of a complex contour, and hardly anybody is eager to do the geometrical analysis, followed by the algebra, needed to mathematically describe such a volume accurately. Instead, I sought for a simplification that would give a good approximation.
Before going further, I should mention the dome. It was there to accommodate expansion of the cargo in many tank cars. But it was normally empty. In fact, the convention in loading transition-era and earlier tank cars was to load them “shell full,” which meant filling the liquid just to the top of the horizontal cylindrical tank. This is easy to judge visually, and when a tank was shell-full, it contained the number of gallons stenciled on the car end.
Tank car cargoes were almost always billed by gallonage, not by weight, so the exact gallon capacity had to be on the end of the car. In fact, that gallon capacity was in a way similar to the light weight of a box car – it might not be the same for any two cars, but was essential to billing cargoes. So the dome size is not part of the tank car capacity. Expansion domes, however, were required to be a minimum of 2 percent of the tank capacity (or the capacity of the compartment, in multiple-compartment cars).
Anyway, returning to the tank volume calculation, the main cylinder is easy, since we all learned the formula for volume of a cylinder in high school. But you need to recognize where to measure. Here is my crude sketch, and the associated formula: 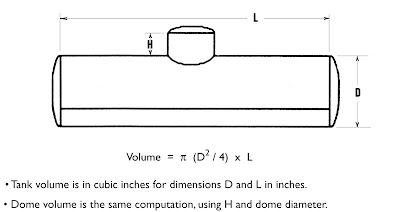 So with measurements over the cylindrical segments, L or H, with measurements in scale inches, one obtains the volume in cubic inches.
Now of course we have neglected those pesky tank heads (or the dome top). The key point in my method is to try and find an adjustment or “fudge” factor which would correct for those omissions. Here is what I found. Using a conversion of cubic inches to gallons of 225, that is, assuming 225 cubic inches per gallon, gave excellent agreement on prototype tank car volumes (I will document that statement in a moment).  In other words, divide your calculated cubic inches by 225 to obtain tank gallonage. The handbook value is 231 cubic inches per gallon, so the difference of a few percent accounts for tank head shape, etc.
Here’s my documentation that it works. The following table contains both prototype and model tank gallonages; the prototype values in the right-hand column were calculated from tank car drawing dimensions (D and L) in Car Builders Cyclopedia volumes, for cars of the nominal gallonage listed in the left-hand column. It can be seen that the agreement is good, which was the basis for deriving the 225 conversion factor. I don’t show dome volumes in this table, but dimensions are given for anyone wanting to calculate them.
As for the model dimensions, note that a lot of older tank car models are pretty big. Only the Athearn model, clearly based on the SP prototype tank car of 12,500 gallons, is really an accurate size. But newer ones, like Red Caboose and Tichy models, would be expected to be accurate, and are indeed so.

This table is also in the handout previously mentioned, but its origins and use were not explained.
I hope this clarifies the volume measurements, which can be done in any scale for any kind of tank car.
Tony Thompson
Posted by Tony Thompson at 11:12 AM