The annual convention of the SP Historical & Technical Society was held this year in Ventura, California, on October 10–13. The Society’s own website (at http://www.sphts.org/ ) will eventually have photographic coverage of much of the event, including our fine train ride on the Fillmore & Western, though several aspects, like the clinic program, cannot really be covered photographically (I gave one of the talks, and the handout for it was posted via this link: http://modelingthesp.blogspot.com/2012/10/ventura-pfe-talk-handout.html ). There would ordinarily also be coverage of the prize-winning models in the Trainline magazine next January. So between other coverage and the wide range of activities, I won’t try to summarize anything but the model display.
I didn’t try to photograph the entire room, but just wanted to show representative views. One major feature of nearly all our conventions is the “Wall of Trains,” a display which permits long trains to be displayed in their entirety. The convention theme was the Coast Route’s “Overnight” train, so a couple of models of “Overnight” trains are visible here. 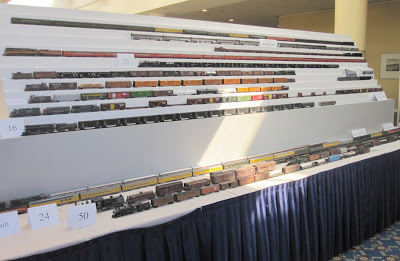 On the table below the “Wall” were displayed additional entries of entire trains. One was my entry of a transition-era SP freight train, behind Consolidation SP 2763. I always put out slips by each car to indicate what the prototype is, and how the model originated. It’s the second train from the front, 14 cars and a caboose. 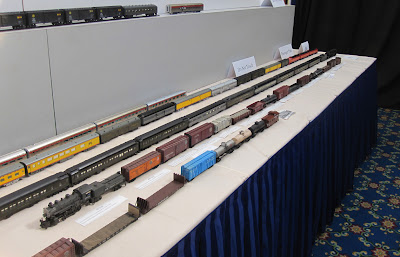 Among the fine dioramas displayed was one by Andrew Merriam, of the sand house and sand tower at San Luis Obispo. I really liked the realistic structures and setting. 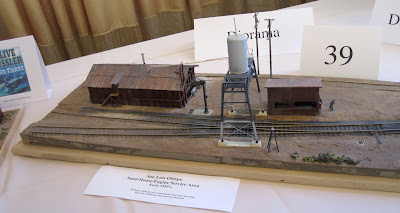 Another favorite area for many people at the convention is the always-extensive array of locomotive model entries. Here is a snapshot of just some of the fine steam and diesel power entered. 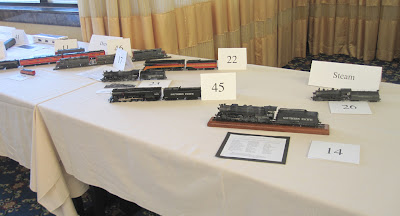 Last, I will show one of the freight cars displayed, Dick Harley’s fine job of modeling a PFE R-70-13 from the Red Caboose kit, involving a new roof and narrowed door. Dick also presented an excellent double clinic about PFE’s mechanical reefer fleet. 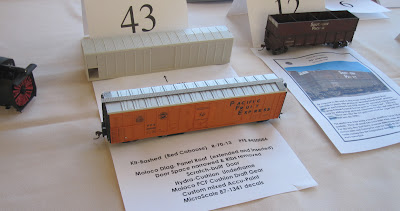 With all these fine models, and many more, on display, it’s understandable that the model room is thronged with viewers all the hours it’s open. It has long been, and continues to be, one of the highlights of each SPH&TS convention.
Tony Thompson
Posted by Tony Thompson at 10:03 PM