The classic Southern Pacific colors of many structures remained the same for decades: body color yellow with brown trim, and green shingle roofs. This scheme applied to passenger and freight stations, towers, section buildings, and miscellaneous roadway buildings. There have long been arguments about exactly how to match these colors, along with arguments about restoring prototype structures, and about painting of model railroad structures.
Southern Pacific used a system of “color drift” cards, carefully prepared and stored in black envelopes intended to minimize fading from ambient light. It is interesting to compare drift cards from quite different eras for nominally the same color. In most cases they are indistinguishable, which either means that they have not deteriorated, or that somehow they all deteriorated the same amount despite quite different age. I’d lean toward the former interpretation.
Through the generosity of Bob Church, who obtained a supply of these drift cards from Sacramento Shops a number of years ago, I have drift cards for all three of the standard structure colors, yellow, brown and green.

I also have physical samples of chunks of paint carved from the surface of three different SP structures, both the yellow and the brown. Below the external surface, these chunks show internally consistent colors from paint layer to layer, and match well with drift cards. This indicates to me that drift card do match actual structure paint colors.
For the drift cards, I show a photograph of these below. I recognize of course that there are many shortcomings to photographing and reproducing colors like this, which limit how useful a photograph like this can be. But for comparative colors, such as a comparison to model colors, a photograph which includes both the standard and the model color ought to show perfectly well the relative value of the match.
I will start with the drift cards. With each one, I show its envelope, giving the official SP color name and number. These were prepared for SP for decades by the Bowles Printing Corporation of San Francisco. The ones shown here all happen to be from the January 1944 color series. The colors, all from Common Standard Specification 22, are numbered 201, Colonial Yellow; 202, Light Brown; and 208, Moss Green. At times some modelers and researchers have called the Light Brown color “Samoa Brown,” but if this was ever the name of an SP structure color, I have not found a reference to it. From at least as long ago as the 1920s, this structure trim color has been called Light Brown.
This photograph was taken in sunlight near midday. 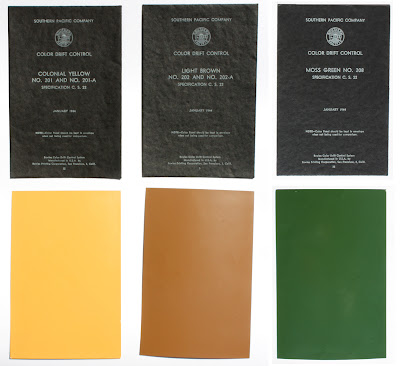 Now I turn to the problem of duplicating these colors in model form. In my experience, the closest match to the Colonial Yellow color is the Star Brand paint, “RGS [Rio Grande Southern] Depot Buff.” I sprayed a white card with that paint, and in the photo below, have laid the SP Colonial Yellow drift card on top of it. The photograph was also taken in midday sunlight. The light angle differs from that in the image above, but it is the comparison of the two color samples that matters.

In my opinion, this is a very close match.
This paint can be purchased on-line from P-B-L, at: http://www.p-b-l.com/ . To see the paint list, click on “online catalog” and then in the “Categories” window, select “paint / cement.” The Depot Buff color is number 1-STR-07.
For the Light Brown color, although I didn’t spray a comparison card, I found a very close match with Floquil Roof Brown mixed with White, in the ratio of two parts brown to one part white. I added a few drops of Yellow in making up a half-bottle of this mixture. I took a similar approach to the Moss Green, and I used Floquil Dark Green with a few drops of Yellow. Neither mixture is quite as close to its color drift as the Star Brand paint is for the yellow, but nevertheless are very close. I have been using them for some time on model structures and feel they capture the SP flavor accurately. My recent project requiring these colors is the new depot for Shumala, the background for which was described in my prior post, available at: http://modelingthesp.blogspot.com/2012/09/a-new-depot-for-shumala.html .
Readers who are also members of the SP Historical & Technical Society will find a brief summary of this Colonial Yellow discussion in my column on modeling in the current issue (No. 113, Fall 2012) of the Society’s magazine, Trainline.
What does the future hold? Tru-Color Paint has announced the release of paints for SP Colonial Yellow (TCP-153) and SP Moss Green (TCP-154), though I have not yet seen these. For updates, you can check with them at: http://www.trucolorpaint.com/index.php?p=1_2_Paint-Products . One can hope they eventually do the SP Light Brown also.
Tony Thompson
Posted by Tony Thompson at 11:54 AM